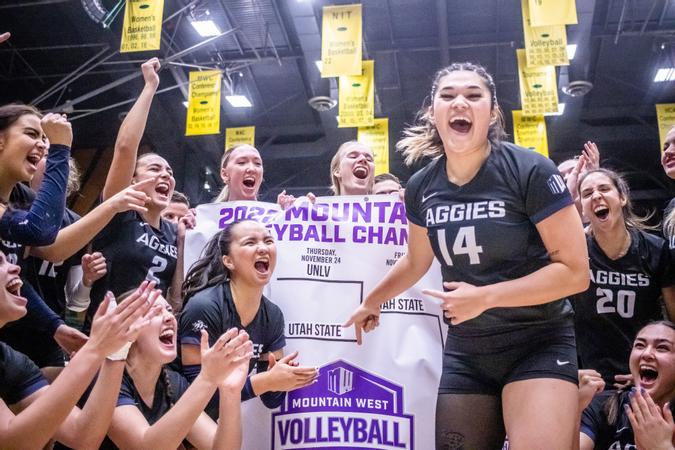 FORT COLLINS, Colorado- Utah State Volleyball has a lot to thank for this Thanksgiving as the Aggies are headed to the 2022 Mountain West Championship Game after beating top seed UNLV on Thursday.

It is Aggie’s first appearance in a conference tournament championship game since Utah State’s 3-0 win over Hawaii in the 2010 WAC title fight.

outsider Shelby Caplonch picked up right where she left off as the senior hit a match-high with 13 kills while hitting .423 against her former team. Sophomore Contra Side Hitter Adna Mehmedovic Added 11 kills while Senior Middle Blocker Kennedy Boyd hit .615 (8-0-13). Freshman setter Leah Wilton-LaBoy led the roster with 23 assists, closely followed by the sophomore setter Beatrice Rodrigues with 22. Wilton-LaBoy, along with Junior outside Tatum stableled USU with two serve aces.

After a 6-3 UNLV lead in set one, a 4-1 run at Utah State with kills from Boyd, Capllonch and Mehmedovic, the score was 7 each. The Rebels went on a short run before a 5-0 sprint by Aggie, topped by a Mehmedovic and Maring block that gave USU a 12-11 advantage. Teams went back and forth until a 4-0 run by USU, this time with a capllonch hammer, gave Utah State a 19-14 advantage. Another Capllonch kill later gave the Aggies set point before a stall tip secured the 25-18 win.

The Rebels took a six-point lead early in the second set, but the Aggies countered with a 4-0 run to cut the lead to 10-8. UNLV maintained their lead until a couple of Mehmedovic kills and a Maring and Mehmedovic block tied it to 13-all. The rebels regained their lead and held them until two killed Capllonch and a hammer struck Senior opposite Kylee Stokes gave the Aggies their first lead of the set 21-20. UNLV held a final lead at 22-21, but a 3-0 USU run capped by another block from Maring and Mehmedovic gave Utah State the 24-22 set point. The Rebels scored again, but Capllonch clinched the 25-23 win with one kill.

The Aggies could practically taste the championship game in set three as Utah State absolutely fired. A stall kill followed by blocks from Junior and Boyd gave USU a 3-0 lead. UNLV scored once before USU grabbed three more quick points for a 6-1 lead. After trading points, a pair of Capllonch kills and an ace of serve from Wilton-LaBoy increased the lead to 11-4. UNLV began to fight back, cutting the lead to four a few times before going 23-21 to a two-point game. However, Utah State refused to surrender as a Capllonch kill earned the USU set point and a block by Stokes and Maring sealed the 25-21 win.