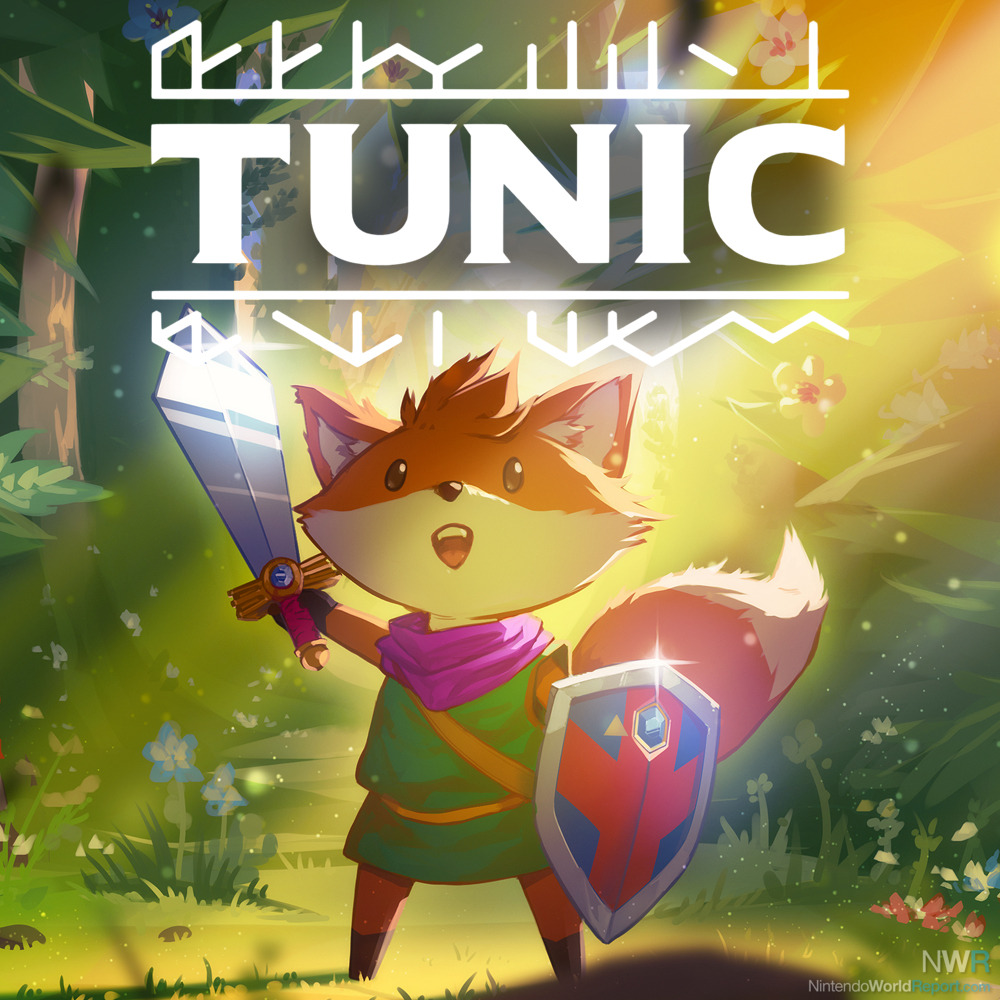 I was seven years old when I first started The Legend of Zelda: Ocarina of Time. Being a Dutch kid and wanting to play this massive action-adventure game was exciting, but there was one hurdle that was difficult to overcome. Unlike Mario, and to some extent the Pokémon games, I had trouble playing Ocarina of Time. Not because of its controls, but because of the enormous amount of text. Sure, the monsters were scary, the Great Deku Tree was confusing, and traversing Hyrule Field felt like a dangerous task, but it was the language that kept me from understanding what was actually going on. It was only with the help of the au pair, who was able to translate an online guide to the game, that I was able to understand what Link’s quest was about. The lack of understanding of the text made the adventure in my head alluring. I kept thinking about the world of Hyrule before I went to bed and I saw all these mysteries that the game seemed to be hiding from me just because I didn’t understand a word of what was being said by the characters who inhabit this world. Feeling like a stranger in a strange land, I slowly but steadily discovered and understood more about this game that gripped me like no other. It’s an experience almost impossible to recreate in modern times. Even with something like Breath of the Wild evoking much of that feeling, my understanding of English and language in general takes away so many of the mysteries I kept from myself as a child. I can’t stress enough how much Tunic made me feel like that lost child again. This game hides so many secrets behind layers of language, experience and growth that it clicked for me like no other this year. It’s finally arrived on Switch now and I’m so incredibly excited to see others explore those far shores with this little fox.

To call Tunic another “Zelda-like” is, in my opinion, short-sighted about the game and its approach. Are there any clear and noticeable influences from the original Zelda games here? Secure. In this respect, most action-adventure games have been inspired by the series. You wake up on the shores of a foreign land and take on the role of a little fox. This world is not only dangerous, but hides a mysterious power that has been sealed. You go in search of this power and discover the mysteries behind this world. What was the civilization like that lived here a long time ago and built statues of foxes? Who is the fallen hero who has multiple shrines? And above all, what role does the fox play in this? The game offers very little information but is slowly revealing its own mysteries through both gameplay and non-verbal communication. As a fox, you’ll find new items, learn new techniques, and face off against a variety of enemies. Dying isn’t necessarily the end, as the game allows you to regain your soul and some of the money you lost. 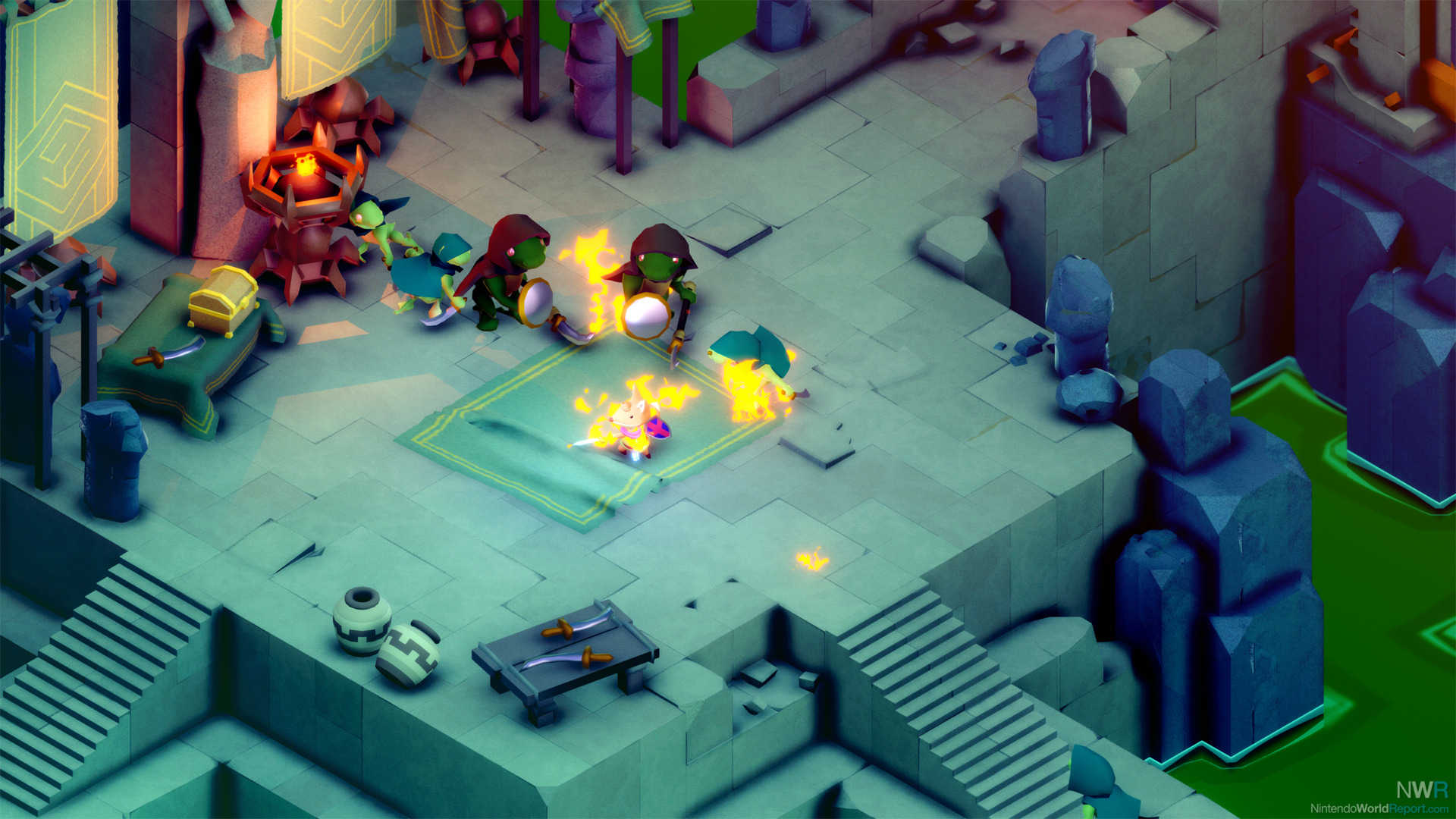 What Tunic immediately stands out is his beautiful art style. The use of soft 3D art from a (mostly) fixed isometric perspective gives it an instant twist. The character designs of the fox and most of the enemies are instantly recognizable and easy to distinguish. The bosses in particular have impressive and imposing designs that will intimidate you when you first face them. The art style is complemented by the secret trick Tunic has up its sleeve: the manual. As you explore more of the world, you’ll come across pages that fill up like an old-school video game manual. You can open the manual at any time and flip through the pages. The guide not only contains some background stories of the world, characters and items, but also explains the core mechanics of the game. This feeds into Tunic’s larger design, where most of the hidden items, techniques, and locations are accessible to you early in the game. I’ve stopped counting the “oh shit” moments I’ve encountered because the game is so elegant in its design that I’ve said it out loud every time I’ve found new shortcuts or alternative routes to locations and paths have found. The guide has some beautiful images and it really feels like a real companion on your journey, feeding a player’s desire to keep exploring. If Tunic’s world design convinced me, then it was this little manual that really captivated me. 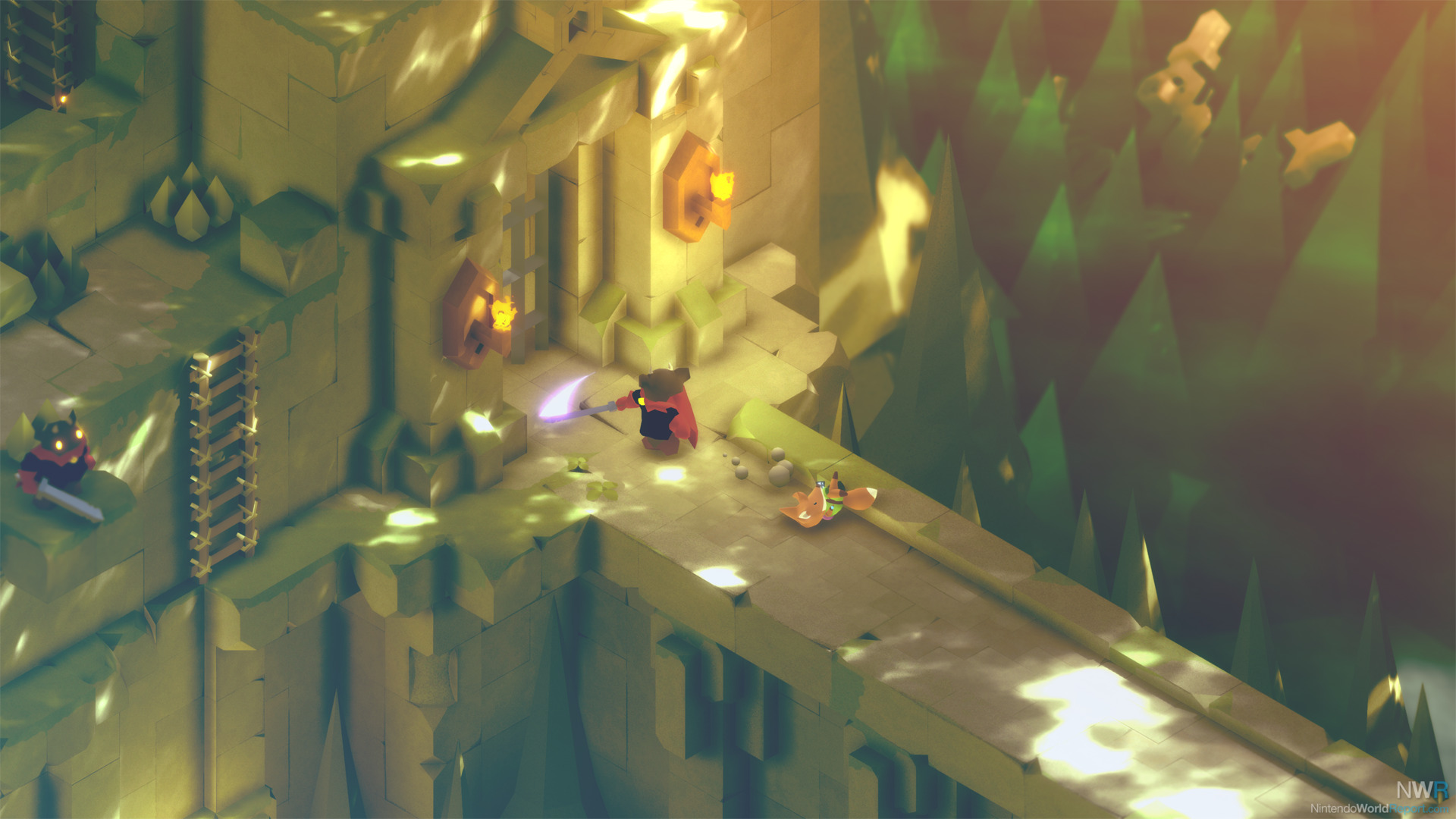 How is the gameplay then? Well, you guide the little fox to find several keys to break this seal. You can go where you want and tackle each boss or obstacle in the order you want. At first the game might feel a bit straight forward to teach you the basics, but it quickly opens up to show all the different regions of this world. Enemies can be defeated with sword wings or other items you collect along the way. You can throw magic bombs that have fire or ice properties, or use other magic items to try to defeat them. However, the game is not easy. Not only does this apply to the bosses, which are definitely a difficult challenge, but even normal enemies can easily block progress or exploration. Luckily, there are additional ways to level up your little fox by collecting items that improve your attack, defense, stamina, and magic. Tunic takes a lot even after the Souls-like games, and has refillable potions to restore some health, as well as dodges and shields to fend off enemy attacks. The combat feels very fluid and snappy, but don’t expect it to be as relaxed as you might see in a Zelda game. 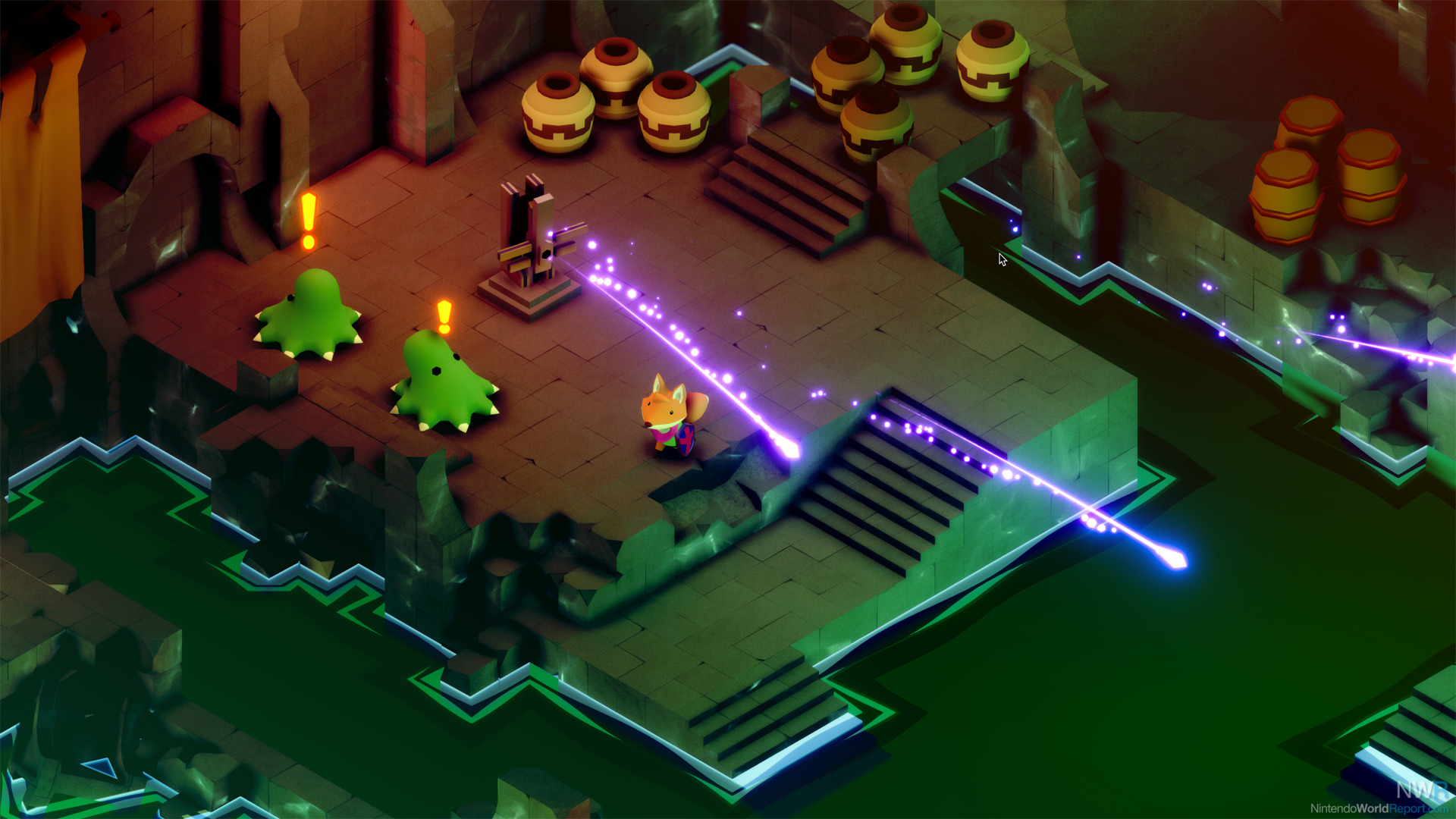 What’s really hard to explain about Tunic is that most of his progression is tied to your understanding of the game as a player. Advanced mechanics hit like a truck once you get the hang of them, either through experimentation or by finding a helpful page in the manual. It happened so often that I discovered new dungeons, locations or items because a new form of interaction was revealed to me. I would wish for nothing more than to relive this game for the very first time, as these revelations will stick with a player and make this strange and hostile world seem a little more understandable. That’s before we even get to elements like the game’s use of a secret language, the way the game tries to communicate directly with the player, and the optional secrets hidden around the world. 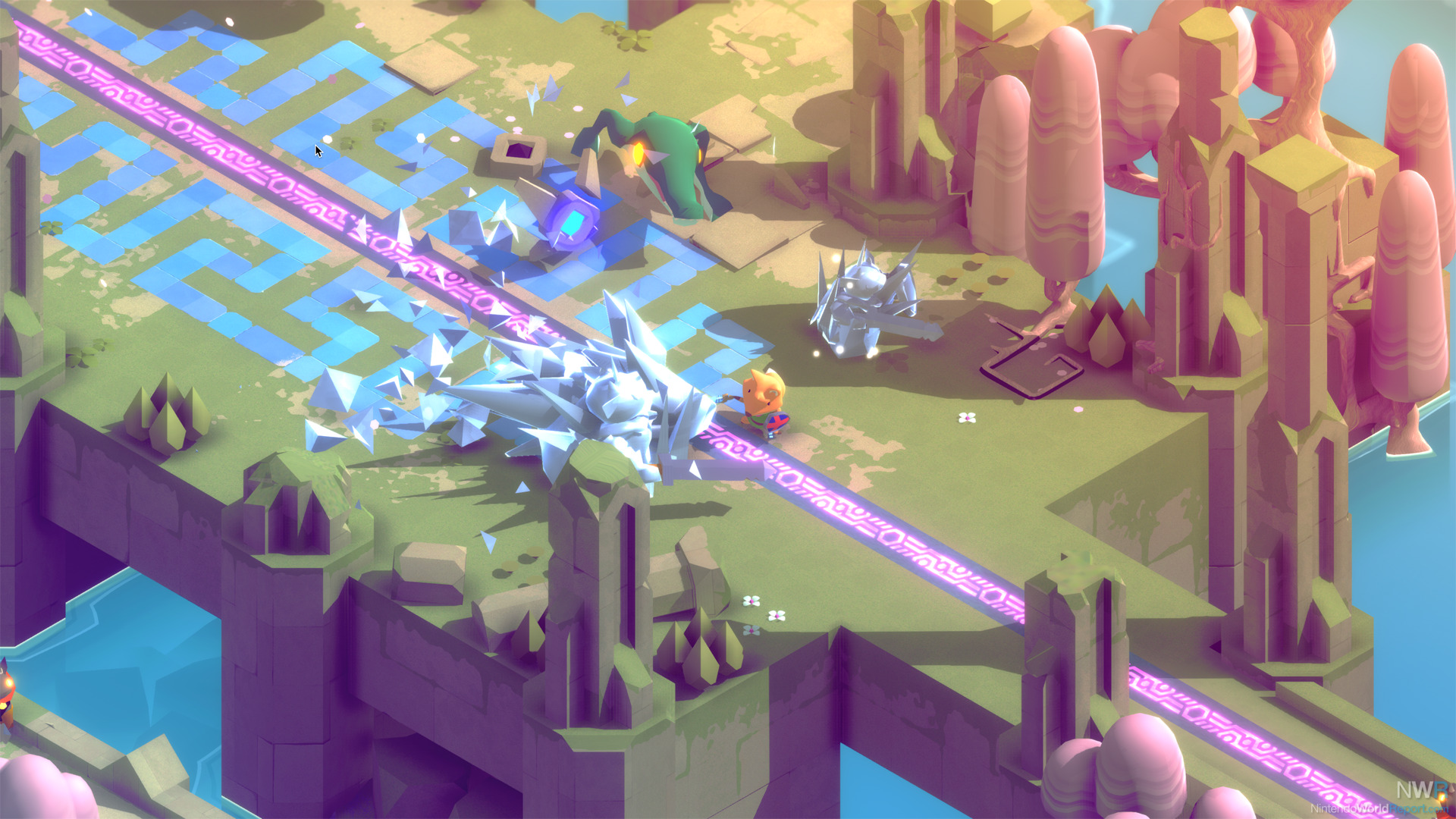 I also want to take this time to commend the absolutely wonderful audio work that accompanies Tunic everywhere. From the incredible sound design by Power Up Audio to the simply phenomenal soundtrack by Lifeformed and Janice Kwan. The music evokes mystery in each track, balancing between playful tracks, terrifying fighting medleys and peaceful, soothing bits. Simply put, I can’t wait to add this wonderful soundtrack to my personal vinyl collection as I consider it a modern masterpiece. 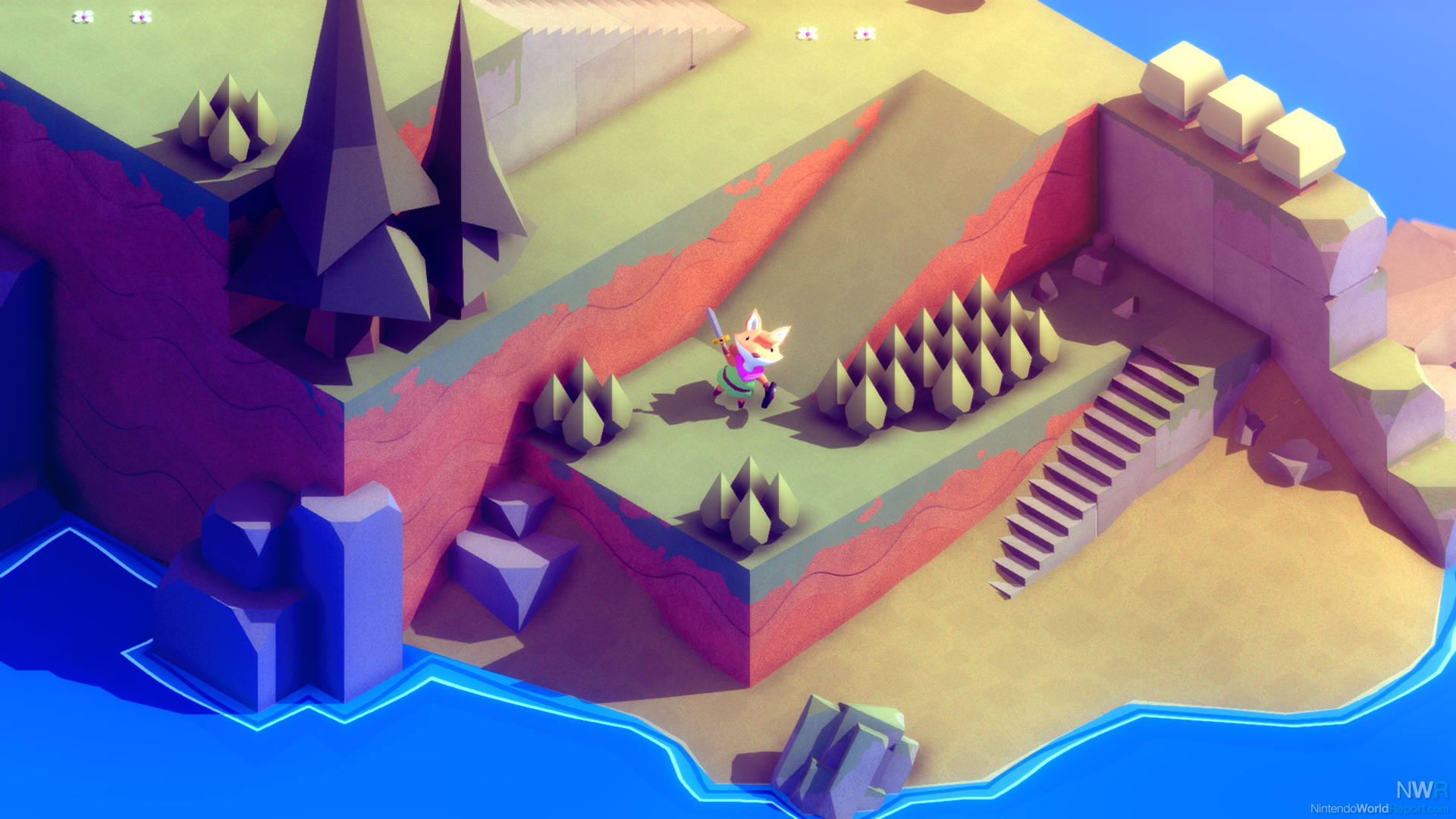 So let’s get to the Switch specifics. I was very hesitant when Tunic was first revealed in Nintendo Direct earlier this month. The framerate in this trailer looked pretty rough, and visually I wasn’t convinced that the nice particle systems and lighting were doable on Nintendo’s outdated hardware. Luckily I came away very, very impressed. Comparing the Switch version’s graphics to my Xbox One S version of the game made the consolidations made for this version appear very minimal. The frame rate is a constant 30 fps in both handheld and docked modes. The only downside is that you often have to deal with somewhat lengthy loading screens when moving between regions or locations. Visually, the game holds up pretty well compared to the Xbox One S version of the game. A noticeable difference is the ambient occlusion, which is of a significantly lower sample quality. This means you get a lot of flickering artifacts in corners and in shadow alcoves around bushes out in the overworld. If you ask me, Switch owners have nothing to worry about playing Tunic on their consoles. Is it the best version of this game? Definitely not, but it runs like a charm and can be enjoyed on the go without too much trouble.

Tunika has become a very special game for me. His approach to game design is something I haven’t experienced in years, and is truly reminiscent of a time when games felt off-putting and mysterious. A time when Luigi could have just hid in Super Mario 64 and copypastas could be real. Tunic shows that its creators understand what made these games special, but doesn’t feel like a makeover of other games. It has its own identity and uses so many clever techniques to immerse the player in its world that there is simply nothing else like it. I’ve put in the hours to fully complete Tunic and it’s a journey I would recommend to almost anyone. If the difficulty gets to be too much for you, the accessibility options are a godsend and there’s no shame in using them. You may have to pull out your actual notepad to keep track of the clues, puzzles, and clues you find along the way, but if you follow this journey to the end, you’ll be rewarded with a game like no other. Tunic is a modern masterpiece and its mysteries, mysteries and riddles will stay with you long after the credits have rolled.