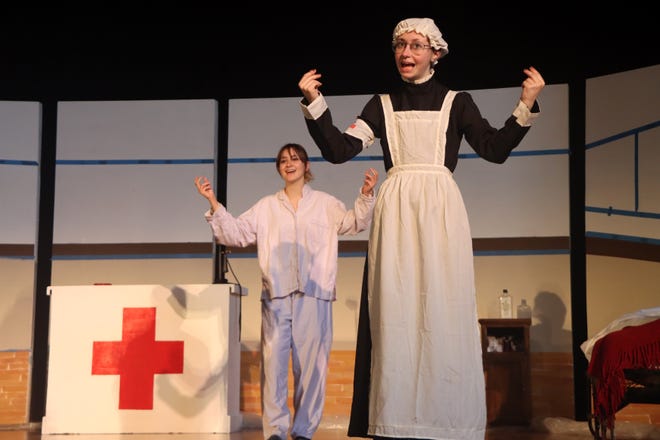 Hidden behind the Tulare Union Theater is Room 530. Here, students have the freedom to be themselves—or whoever they want to be.

There is a stage at one end of the well-lit classroom; on the other side is the desk of visual and performing arts teacher Jill Coyle. In between are tables and chairs full of students who some days spend hours in the walls of the room.

A handful of drama students use theater to express themselves, while others use it as an escape. Regardless of the “why?”, Coyle’s classroom gives these students the opportunity to shine.

“It’s a way for me to have fun,” said Sky Cottle, an acting student at Tulare Union. “I want to make people happy”

She excitedly burst into a small hallway outside the classroom on Wednesday afternoon before quickly explaining the activity she and her advanced acting class were conducting.

After a brief conversation, a muffled but noticeable noise could be heard from behind Coyle’s classroom door.

It was Sky’s cue.

We entered the room and she immediately took the stage. Two students sat and waited, and soon a scene began to develop.

Although they were still in room 530, the stage turned into a marriage counseling room for a brief moment and Sky was suddenly the counselor.

You wouldn’t know, but before the pandemic, Ivy considered herself antisocial. Since she returned to campus, theater has allowed her to express on stage the feelings she felt in real life.

Whether her character’s emotions were meant to express sadness, anger, or happiness — all of which Ivy experienced at one point or another — she said the theater gave her an opportunity she couldn’t find anywhere else.

“It’s fun to be a different person than myself sometimes,” Ivy said, blushing as we spoke. During her first few months in acting class, Ivy said she didn’t enjoy it; but slowly but surely she got more and more into her.

Now Ivy thrives on the stage. Sky watched Ivy improvise her way through the marriage counseling session before finally realizing the problem Ivy and the other student were faking.

The audience applauded after the activity, bringing smiles to the faces of the students and a few chuckles here and there. One of the students who joined in the laughs at Wednesday’s show was Drama Club President Gwen Flores.

She is the only advanced drama student to be in Coyle’s class before the pandemic.

Gwen said she felt it was her responsibility to help students adjust to the personal change and relearn much of what was taught online. “We really had to bring it back,” she said, “because most of these kids have never been on stage before.”

The experience has taught her a lot about management, teamwork and communication.

“Working on a show gets you closer to people,” Gwen said. “It’s like, in a way, these guys are my second family.”

Coyle echoed Gwen’s sentiments: “I’ve seen my advanced acting classes and all my performing arts classes grow and connect like never before this year after our period of isolation.”

Of the nearly 1,800 students at Tulare Union, a handful find themselves in room 530 each year.

Some of them learn the basics of theater, others are interested in singing or graphic design. And then there are the students who use the classroom, the theater and the stage to find themselves.

“It’s nice to see them changing for the better,” said Coyle.

Lauren Jennings provides education and news coverage for the Visalia Times-Delta/Tulare Advance registry. keep following her Twitter @lolojennings. Get notifications and stay connected to everything Tulare County has to offer for just $1 a month. Subscribe today.