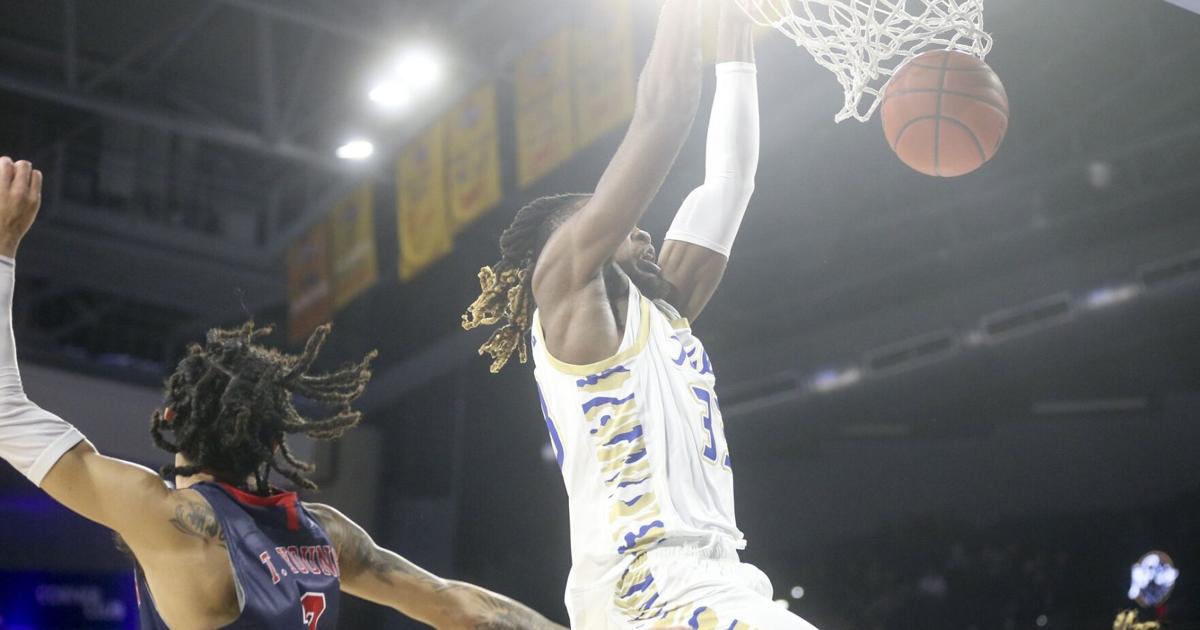 The University of Tulsa men’s basketball team is looking to recover after returning from a tournament in which they played three games in three and a half days.

TU’s next opportunity is a big one as the Golden Hurricane take on Oklahoma State on Friday.

Golden Hurricane first-year coach Eric Konkol indicated that this will be the first matchup of a three-year deal with OSU. Either way, it’s a big deal for Tulsa to play Oklahoma State.

And while that means Tulsa will end November with just one game at the Reynolds Center, it’s an important game from the public’s standpoint.

“It’s a challenging month of November with just one game at home but I thought this would be a really good opportunity to play against a team in the state and over the course of three years and we had a great opportunity ahead of us. “

Tournament review: After a strong performance in an impressive 85-66 win over Loyola Chicago in Game 1 of the Myrtle Beach Invitational last week, the rest of the tournament didn’t go quite as well for Tulsa.

A day later, TU lost a close game with Charlotte, 68-65, in the semifinals of the tournament, and then in the third-place game on Sunday morning, the Golden Hurricane lost 77-60 to Murray State.

Konkol pointed out that the team learned a few lessons from those games and worked on them in training all week.

“The great thing about the game of basketball is that there are so many differences, so many nuances in the way teams play, how teams can be good,” Konkol said. “In that second game I was very concerned about the way Charlotte was playing offensively as she didn’t have the kind of prep that we would like, especially with a newer team and defense. It took us a little longer to settle in and we did, we just couldn’t finish the game.

“And then in Game 3, I just feel like we were a bit limited. They really hurt us on the back boards, they hurt us in transition. It’s just one of those games where we just didn’t play well from start to finish. We didn’t kick the ball well and there was too much switching play. I thought our guys were playing hard, we just couldn’t get into a great groove enough to get back in the game.”

Rebound Issues: Among the issues that have emerged as early weaknesses for Tulsa is recovery. The Hurricane has been overtaken four times in five games so far, and Konkol is looking for ways to mitigate the problem.

Against Murray State, Tulsa lost the Battle of the Boards 54-31. The only game in which it led the opponent to a rebound was in the win over Loyola Chicago.

That’s one of the reasons Konkol thinks the game against OSU will be a good test, as the Cowboys are a good rebounding team, averaging 40 rebounds per game and outperforming their opponent in every game so far.

“We’re trying to improve things that we need to get better at and one of the things that we’re not strong at, they happen to be very strong and that’s the rebound,” Konkol said. “We’re going to be at a size disadvantage, but there are still things we can and must do to rebound basketball. It’s one of those areas that really hampers us. The same applies to protecting the two-point shot. We must be able to come, we must be able to help, we must build walls. We’re not a shot-blocking team, so there are areas where we just want to improve overall.”

Posts from Selebangue: He wasn’t well known to Tulsa fans prior to the start of the season, but newcomer Bryant Selebangue was a huge revelation, appearing virtually every night as one of the Golden Hurricane’s premier contributors.

Against Murray State on Friday, Selebangue led TU with 14 points and 11 rebounds for his second double-double of the season. That’s pretty typical of what the 6-foot-8 forward, a second transfer from Southwest Florida, has been able to offer lately. In five games, all of which are starting, Selebangue is averaging 11.0 points and a team-high 9.0 rebounds per contest.

“He really hasn’t been here long and then he was pushed into the starting XI because he deserved it, he’s a good player,” Konkol said of Selebangue. “We knew he was a guy who could rebound basketball and he proved he could do it, but the goal was a really good sign, something we weren’t sure where his chances would come from and how. We want to keep working on that and finding more and more ways for him to shoot the ball and help this team.”

And although he seems to have come out of nowhere and arrived on campus a little later than the rest of his teammates, the Montreal, Quebec, Canada native has blended in well on and off the court.

“Very happy with his further development, he wasn’t with us all summer,” said Konkol. “We re-signed him in the spring but he had to finish a class to go through his junior college, then we had to go through the visa process which took longer than we had hoped and then he came here right at the start of school . So he missed all eight weeks of summer training with everyone getting used to the school, of course his team, the way we try to play and also his teammates getting used to him. There is a process that goes with that.”

23 — the margin of loss for Tulsa in last Sunday’s recovering fight against Murray State, 54-31, an area where the Golden Hurricane is looking to improve

4 – Number of 3-pointers TU connected against Murray State, including a 1-for-16 shooting from beyond the arc in the second half

18.0 – points per game average by guard Sam Griffin despite only scoring 11 in the last game

36.4 – Percentage of free throws connected through the hurricane against Murray State (4-for-11). Overall, the TU still shoots free throws at a rate of 75.0 percent during the season

6 – Number of assists guard Anthony Pritchard had in the Murray State game, a season-high that brought his average to 4.0 per game, the best on the team