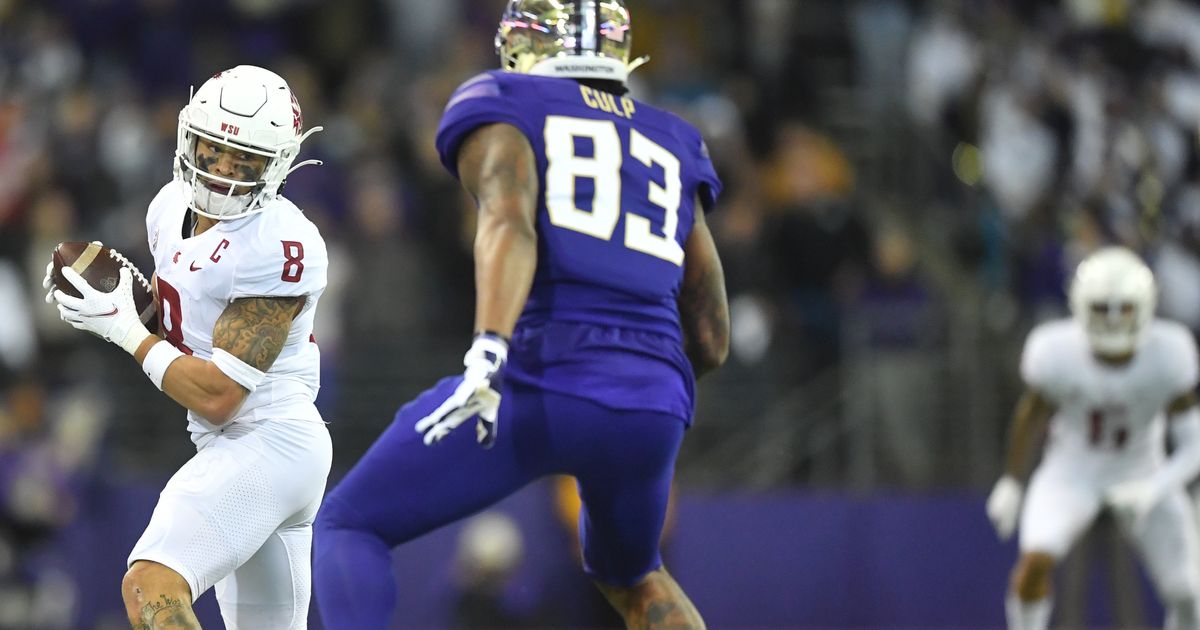 Now, the two bullpups represent East Washington once again as starters in Washington State’s defensive backfield. And they have their eye on another state title.

“As kids from Washington and from Spokane, you grew up watching the Apple Cup, you grew up wanting to be on that stage,” Marsh said. “It’s just a big opportunity, and it means the world.”

Marsh is a sixth-year cougar, a third-year starter at Nickel, and a second-year team captain. Lockett, a year Marsh’s junior, reunited with his hometown friend this offseason and, after a winding journey that took him through the ranks of junior college, assumed first-team duties for WSU in free safety.

“It’s great. It’s what we dreamed of as kids,” Marsh said.

Marsh will play his final collegiate game at Pullman, and Lockett will get his first taste of the Apple Cup rivalry on Saturday when WSU (7-4, 4-4 Pac-12) and their steadfast defense move to 12th place. Place Washington (9-) meet. 2, 6-2) and his strong pass attack on Gesa Field.

“It’s surreal,” Lockett said. “Who doesn’t want to play in the Apple Cup growing up? It’s a blessing. I can play with my brother. And of course I get to play against my other brother at U-Dub.”

Marsh and Lockett will be up against their G-Prep teammate – Devin Culp, a fifth-year Husky and third-year starter at the end.

The three became fast friends in Spokane and met early on through youth basketball tournaments. The three teamed up at G-Prep and helped the Bullpups win their first state championship in 28 years, a 34-16 win over favorite Skyline (Sammamish) in December 2015 at the Tacoma Dome. G-Prep went 14-0 that year.

“This whole season has just been memories that will last forever,” Marsh said. “Obviously this team had a lot of guys (including future All-American Cal linebacker Evan Weaver). It was family. We were all brothers. Just having a season like that – staying unbeaten, becoming national champion – that’s a great feeling. There are things I will never forget in my life.”

Marsh, then a junior cornerback, recorded a touchdown-saving interception in the title pitch. Lockett, a sophomore and G-Prep’s other starting CB, played “incredible coverage throughout the game” against Skyline’s stacked receiving corps, said longtime Bullpups coach Dave McKenna, noting that Lockett only allowed one degree.

“The best cornerback duo in the state, we think,” added Marsh.

“They just played with no lights,” McKenna said.

Marsh, a team captain and first-team pick of the All-Greater Spokane League, performed at WSU in 2017. As seniors, Lockett and Culp led G-Prep to the quarterfinal round of the state playoffs. Culp, a touted recruit, has signed with UW. Lockett received an opportunity as a receiver at Utah State.

Over the years, the three maintained a regular correspondence. Even this week, despite the bitterness of the rivalry, they had a nice chat and didn’t exchange trash talk.

“We’ve been together since we were kids and we keep in touch,” Marsh said. “Earlier this week, Sammy FaceTimed (Culp). We just said what’s going on, need to talk to each other on the phone. We always keep in touch.”

They have also adhered closely to G-Prep’s program. Bullpup trainers check in weekly. Marsh returned home this fall to watch a game from the sidelines. Culp and a few UW teammates hosted a free camp for local kids this summer.

“I’m just so proud of her,” McKenna said. “Off the field, they get together and talk to each other. When they are in the field, they compete with their tails. … I just cheer for the kids. I want all three to do plays.”

Marsh and Lockett are likely to face Culp in multiple games this weekend. The two Cougars DBs cover the middle of the field where Culp is often attacked.

Marsh defeated his former teammate last season. At the beginning of the fourth quarter, a short pass from Culp’s hands tipped over. Marsh was there to take his second stoppage of the game, which he returned for a touchdown that sealed a 40-13 victory for the Cougars in Seattle. WSU weathered a seven-game Apple Cup drought.

“That’s great stuff. They’ll joke about it later,” McKenna said. “Friendship goes beyond football. As a coach it’s fun to sit back and watch this competition and know that at the end of the day they will look after each other.”

Marsh was a WSU scout teamer for his first two years before taking on an active role in 2019. He continued to develop steadily and became a standout Pac-12 player last season.

Lockett’s path at this stage in his career was a little less straightforward. He was pocketed as a walk-on receiver at Utah State in 2018, then brought to safety and served on special teams the next season.

“I wasn’t getting any playing time, so I decided I was going to go juco and bet on myself,” he said.

Lockett enrolled at a JC power, City College of San Francisco, and had a breakout season in 2021 registering three interceptions for the Rams, who went 13-0 and won the California Community Athletic Association championship .

The whole time, Marsh and Lockett kept an eye on each other.

“Even when I was in different schools, we always stayed connected,” Lockett said. “We’ve had this brotherly love for years. It will never change.”

At the start of last season they had discussed the possibility of a reunion on the Palouse.

“Both paths we took, we didn’t know it was going to end up like this,” Marsh said. “Of course that was the goal. When he was at juco and I was here, we definitely talked about it, like, ‘We have to get you here soon.’ ”

Lockett was looking for a home during the 2021 recruitment cycle. The Cougars were looking for a new safety or two after losing all of their depth in that position to completion.

“That was a question mark: Who would replace (George Hicks) and (Daniel Isom) and all these guys?” Cougars coach Jake Dickert said.

A few weeks later, the Cougars still hadn’t made an offer. So Marsh tried again and went straight to Dickert’s office.

“I was like, ‘He can play,'” Marsh said. “We just talked and everything happened. … He really deserved his chance. All I did was help him connect with the coaches.”

Finally, Dickert was convinced that given his experience, impressive 2021 campaign and connection to the WSU program, signing Lockett was “just too much of a home game to pass on.”

“To be given the opportunity to pursue our dreams and play together, not just in high school but also at the college level,” Marsh added, “that’s what we talked about, it’s been created. It was a great blessing.”

When the offer came in, Lockett quickly broke away from San Jose State and jumped at the opportunity to join his longtime friend in their home region. He expressed his gratitude to Marsh, whom Lockett considers “like a big brother.”

“I wouldn’t want to be anywhere but here,” Lockett said, acknowledging that he would get emotional when the season ended and Marsh left. “He brought me here. He’s one of the main reasons I’m here. He just gave me a clear head in this crazy year we’ve had. He was a big factor in my success.

“Every day I think ‘This is crazy’ when I come in here. I can play with my brother. It’s like high school again. I can relive those days with someone I care about.”

For the second straight season, Marsh has been one of the Cougars’ most consistent defensemen.

“We both started out as career changers, so to see where he’s gotten to – he’s been a captain for two years and the part that he’s been to this program and this team, that’s what motivated me,” Lockett said of Marsh . who received an honorable mention for all conferences last year.

Marsh, at 5-foot-10 and 188 pounds, is adept against the run and the pass. He is third on the team with 60 tackles and has contributed two sacks. According to Pro Football Focus’ performance metrics, Marsh holds the seventh-best grade of any cornerback/nickel in the Pac-12.

He recorded his first interception of the year in the fourth quarter last week against Arizona quarterback Jayden de Laura, the former Cougar starter who was kept in check by his former team.

Marsh is entering the final stages of his 45-game WSU career.

“With my time coming to an end, I’m just thinking about all my years and being able to play with my brother Sammy,” Marsh said. “It’s really a big deal for us and for the Spokane community that the younger kids are looking up to us. We cherish these moments. I know we are very grateful for that. It’s definitely starting to hit me more and more as we get closer. I’m very grateful for my career here – all the memories I’ve created and the ones I’m creating this year.”

Lockett has quietly improved over the season as his confidence grows and he becomes more comfortable with this level of competition.

“Sammy’s fun because all he’s done is get better,” Dickert said. “I don’t know if I’ve ever heard Sam say more than a few words. He just smiles and works hard. Armani is like that too. They are very much ‘example guys’. … They really appreciate being here.”

The 6-1, 205-pound Lockett is fifth on the team with 46 tackles and leads the Cougars with three interceptions. He was well positioned this past weekend, recording two picks in the third quarter against a Wildcat team that came into play seventh nationally in pass production.

“He’s not going to be the loudest person in the room, but if you watch him, he’s just always on the go and doing what he has to do,” Marsh said.

“That really inspires me. He’s a playmaker. He’s big, but he can run, mark and attack. He can do anything.”

WSU’s deep, center-of-the-field coverage got off to a shaky start to the campaign but has settled well. The Cougars have held all but two opponents to under 300 yards and limited six teams to under 220 yards through the air.

Cougars DBs say communication has been key to their success, and there is no greater connection at WSU secondary school than that between Spokane natives.

WSU’s defensive backfield faces its toughest challenge of the season this weekend against its state rivals, who boast the No. 1 passing offense in the state.

“(The Apple Cup) is something we have to earn,” Lockett said. “I’m excited, especially as it’s my first. I’ve never had to play in such an atmosphere.”