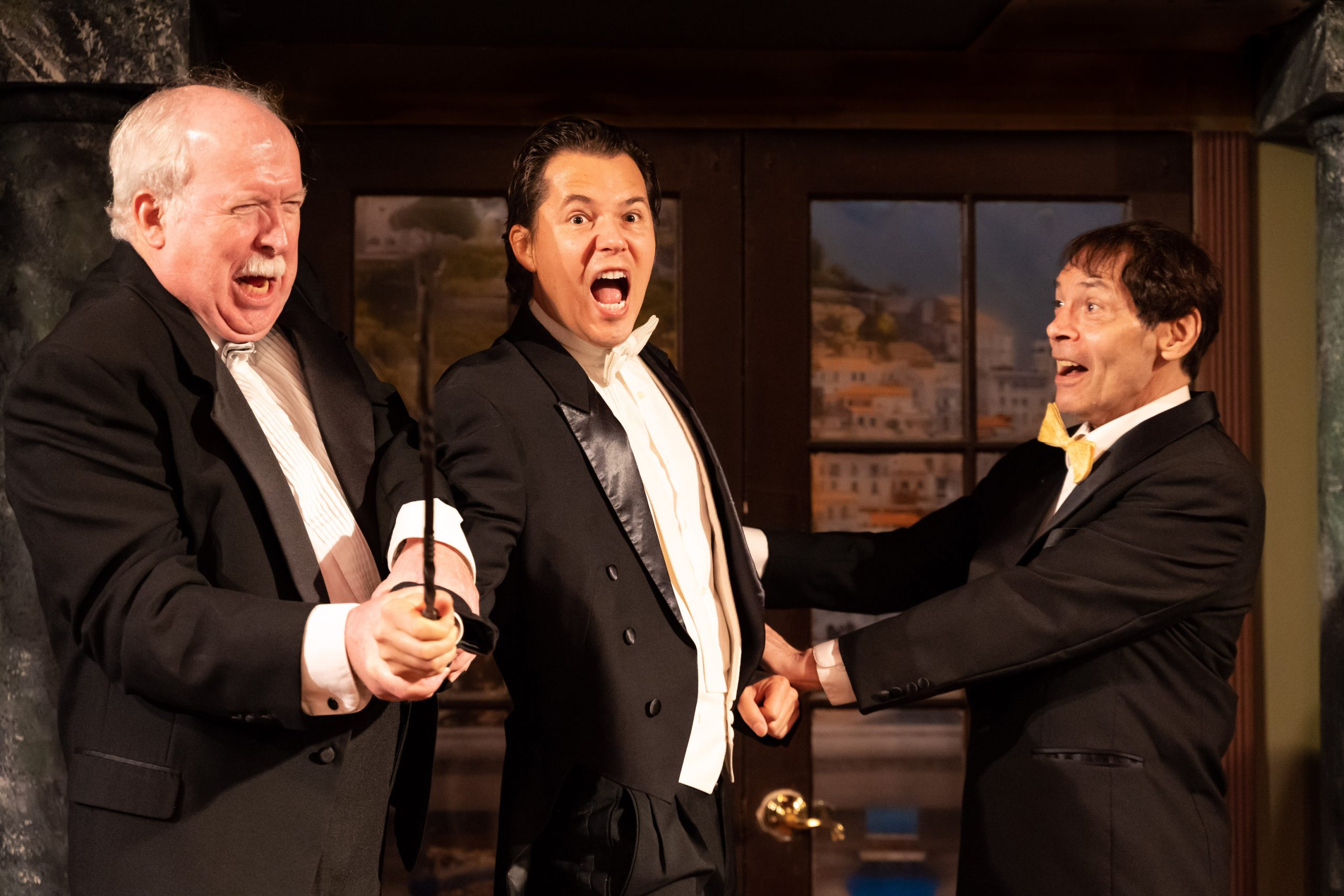 Ah, PG Wodehouse. I fell in love with his British humor around the same time I discovered Monty Python’s Flying Circus on PBS and read much of his prolific work. I read so much Wodehouse in one page that I began to spice up my writing with surprising phrases, random abbreviations, and puns (“I could see that, if not actually upset, he was far from being upset” – The Code of the Woosters).

Wodehouse is best known for his dozens of novels about British people of a certain class, particularly those featuring the butler Jeeves and his employer Bertie of the aforementioned Woosters. He also wrote many successful musicals and a few plays – including one named after a line from Hamlet. The game is the thingnow on stage at Theater 40 in Beverly Hills.

The game is the thing is from 1926 and adapted from a 1924 Hungarian play. So yes, it’s dated but also charming. It features a sticky romantic situation, a wild resolution, and lots of it bon mots. The protagonist is a successful librettist, Sandor (Daniel Leslie), the romantic partners his nephew and composer Albert (Eric Keitel) and his prima donna fiancé Ilona (Kristin Towers Rowles).The men, accompanied by their collaborator Mansky (Michael Robb), arrive at a castle on the Italian Riviera late at night and congregate in Sandor’s room. Ilona returns to her room next door from a trip; Through the surprisingly thin castle walls, Albert and the others hear her talking to the married Almady (Todd Andrew Ball). Almady takes a step, and Ilona’s answer doesn’t seem harsh enough for her fiancé. A broken engagement could be on the horizon.

But wait! Sandor, like PG himself, is a prolific writer of dialogue, and he has an idea that could save the wedding. With the support of two servants, Johann (Jeffrey Winner) and Miss Mell (Milda Dacys), he sets out to keep the couple together.

While the scenario is a bit exaggerated with the repetition of some jokes, the execution of Sandor’s plan in Act III is highly satisfying.

Set designer Jeff G. Rack has created a magnificent castle-like set, complete with views of the Ligurian Sea. Director Melanie MacQueen guides the actors to inhabit their centuries-old characters with aplomb. Leslie plays the powerful Sandor with appropriate pomp and confidence. The winner steals scenes with a characterization reminiscent of Marty Feldman, in which he plays Igor The young Frankenstein. All in all, The game is the thing is a hilarious Wodehouse romp, an amusing and welcome break from our 21st century reality.

The game is the thing runs Thursday through Saturday at 8:00 p.m., Sunday at 2:00 p.m. through June 12 at Theater 40 on the Beverly Hills High School campus, 241 S. Moreno Dr. Tickets cost $35 and are available here. Theater 40 has just announced the lineup for its 56th season; Find out and subscribe here.