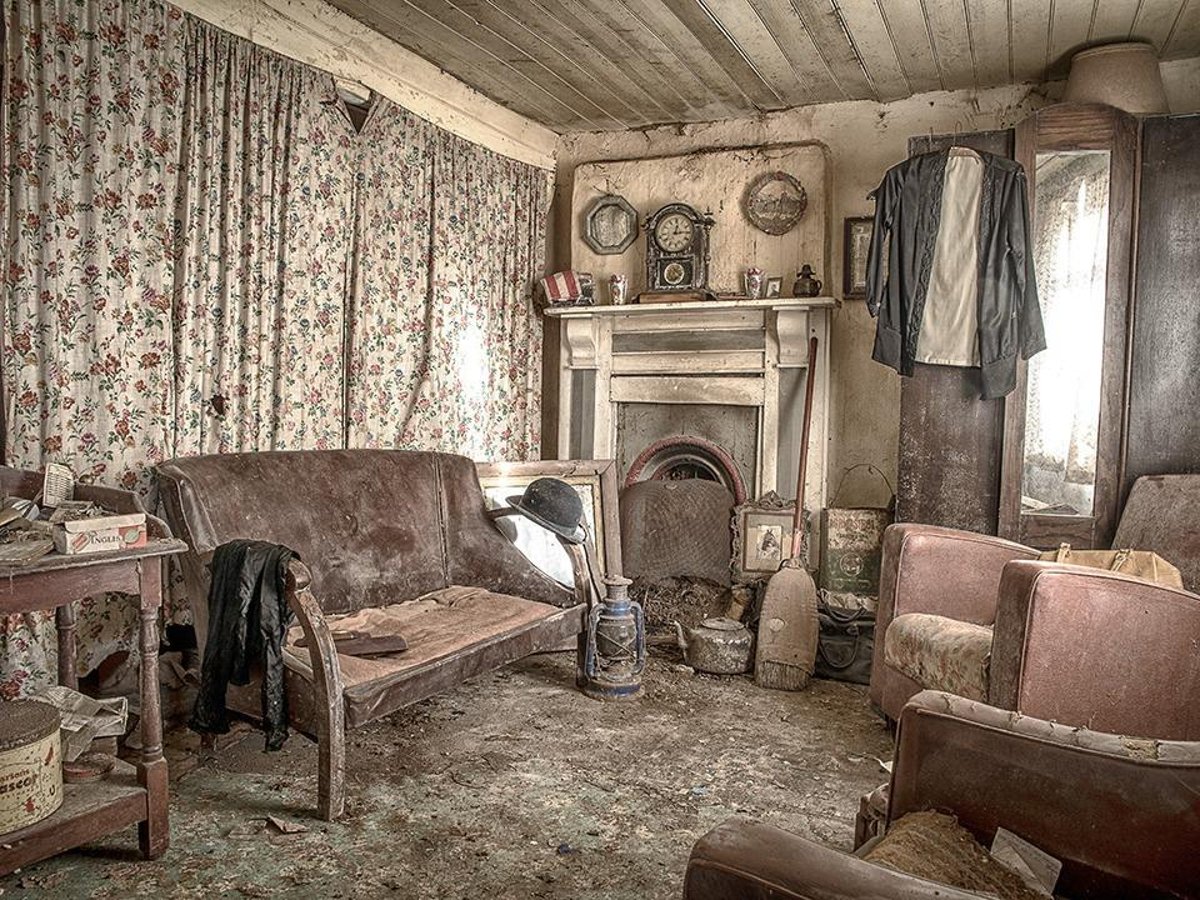 Maghaberry photographer Rebecca Brownlie sums it up in the introduction to her recent book Abandoned Ireland – it’s about ‘who lived there, what the building used to be and ultimately why it’s been abandoned now’.

Abandoned Ireland contains over 150 haunting color photographs of abandoned homes, schools, churches, prisons, dance halls and more from across the island of Ireland.

Each building is accompanied by a summary of its history (thanks in many cases to Rebecca’s determined detective work).

Rebecca, a mother of two who works for a pharmaceutical company by day, explains how her obsession with old, crumbling, run down and forgotten buildings came about.

“Over a decade ago I was in a paranormal group, I was a team photographer and a location scout. We tried to find haunted places, sat up late at night and tried to get any kind of evidence through audio or video.

‘That led us to castles and hotels and I found a house called Cairndhu House in Larne.

“It was abandoned and derelict then, but not to the extent it is now. I couldn’t believe we had something like this in Northern Ireland; it was like something out of a horror movie – it was very gothic and unique in architecture.

“I set out to find the owner, who was a property developer at the time. He gave us a bunch of keys to come and go with. We went there fairly regularly for a couple of months trying to find evidence of something paranormal. But I also wanted to know more about the history of the house – who lived there, what happened in the house before it was abandoned.

“I found it belonged to Sir Thomas and Lady Dixon. They loved to entertain and it was also used as a war supply depot. Princess Margaret came for lunch while doing a tour (of NI).

“They (the Dixons) donated the house to the Hospital Trust, then it was a convalescent home until the late 1980s, then it was abandoned for lack of funding.”

Rebecca was more drawn to the history of the place than any spooky goings-on.

She left the paranormal group, focused on photographing abandoned buildings, and started a Facebook page, Abandoned NI, which now has nearly 50,000 followers — a clear indicator of how these images so powerfully influence the collective imagination.

“The more I started posting photos of places, the more people commented on them. It was nostalgia for people.”

Abandoned Ireland is a visually stunning book, with images that are somberly beautiful and evoke chills, nostalgia and wonder, for there is something compelling about decaying buildings, especially those that were once magnificent – the grandeur that is still visible between the decay and the cobwebs is like Miss Havisham’s house.

Rebecca traces her passion for photography back to when she was 12 and won a camera on a TV show called Sussed.

“From then on I became interested in cameras and always had one.”

Ironically, someone so immersed in photography doesn’t like posing in front of the lens; for them everything revolves around their topics.

And the gear she uses to capture her impressive images isn’t particularly fancy, but her instincts are remarkable.

“I use an SLR camera and a tripod. I travel light. I also now have a drone which gives you that extra perspective of the buildings from above which is really nice.

“It’s not the equipment, it’s how you see the image you want to produce.”

Seeing her book on bookshelves across Ireland is, she says, “really surreal”.

“It just doesn’t feel like my book – although of course I know all about it. I think it will just take some time to settle in but I’m really happy with it.”

Rebecca took thousands and thousands of pictures but had to reduce her huge catalog to just 150 for the book.

“I chose the ones with the greatest story,” she says of her Herculean task.

And she picked her favorites, like Dessie’s, a cottage in Cookstown.

Each building has been given a new name and Dessie’s photo is captioned ‘Country Life’.

“It’s the little cottages that have a rich family history – those are the ones I really like.

“As soon as I walked in the door I was just blown away. It was like something out of the Volkspark.

“The story we uncovered was incredible. We found charters from the 18th century, newspapers from 1911, Victorian clothing, old money, large suitcases full of love letters.

“Dessie really made an impression and I wish I had met him.”

The Edendork Dance Hall, Co Tyrone, (titled ‘The Last Dance’) is another stunning image and a place that captured their imaginations.

“I have never encountered a blanket like this before. I’ve never seen anything like it on the whole island of Ireland so it’s very unique even though the building isn’t that old.”

Rebecca gives lectures about her photographs, which she enjoys a lot.

“I love to get up and talk about them. You start talking to people afterwards and they tell you about new places or places they own.”

She has also appeared in a number of local television shows.

“I would like to have my own TV show because there is such an interest in abandoned buildings.

“Everyone wants to know who lived in that abandoned house, and when you tell them the story, they’re amazed.”

Of course, old buildings can be scary, and Rebecca has had some spooky experiences.

“I find that when you go to these places, when you’re not looking, things happen.

“There was an adventure center in Co Meath called the Tain Adventure Centre. I visited about eight years ago and there is a dormitory.

“I knew it was a monastery before it was an adventure center – you can see the characters outside and there’s a big bell tower.

“There was a dormitory and a corridor and there were bedrooms on either side and old bunk beds in them.

“My sister was with me filming on an iPad. There was no one but us in the corridor or building and I reached the end door, opened it and we both heard a voice that sounded like it was next to us.

“She recorded it and you could hear it quietly. At home we played it on the computer with headphones, it’s a man’s voice and it says ‘You’re crazy!’

“Whenever I gave one of my talks in Belfast, I played the video and people could hear it. A girl in the audience said the building was not a monastery but a priestly training center. I couldn’t understand why the voice had an Ulster accent, but it turns out the Belfast priests used to go to this college and train there.”

Something like that would put most people off creepy old buildings, but not Rebecca.

“This is a life project for me. It’s nothing I get bored with.

*Abandoned Ireland, published by Merrion Press, costs £24.99 and is available in all good bookshops and on Amazon.