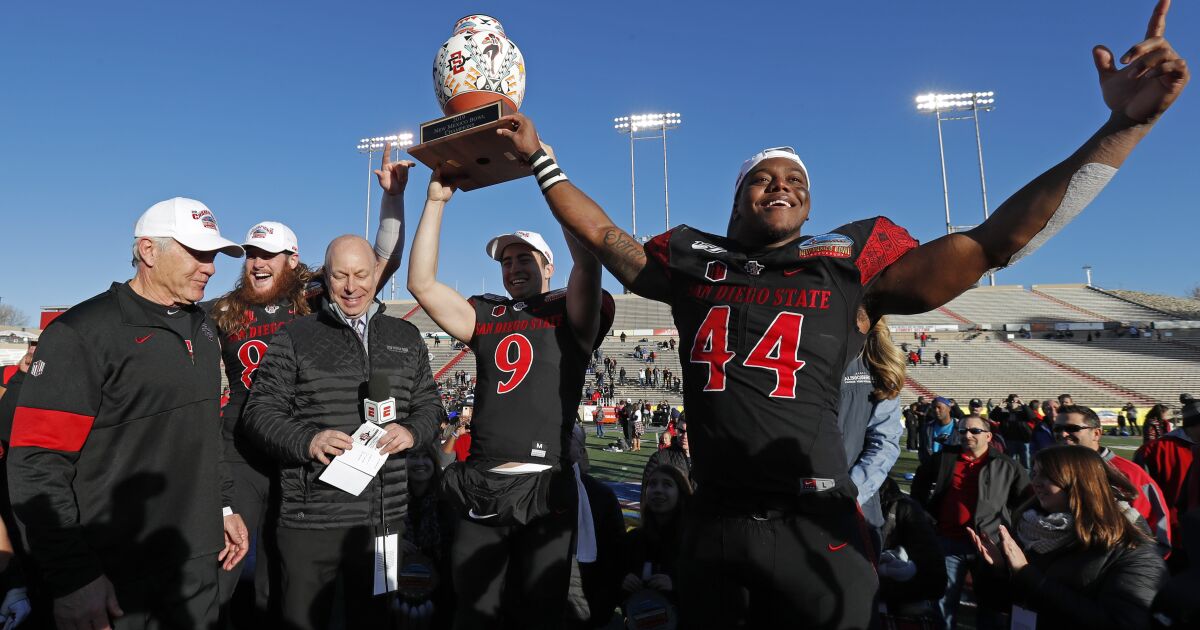 San Diego State is focused on ending the regular season strong in its Mountain West game against the Air Force.

But that hasn’t stopped speculation as to where the Aztecs will finish the season.

where do you go bowling

It’s been two weeks since SDSU earned its sixth win and became Bowl-eligible for the 13th straight year.

The Aztec Bowl’s destination hasn’t been revealed since then, and it might not become much clearer in the next two weeks before its December 4 reveal.

National projections show SDSU floating around everywhere, often with no regard for reality.

The Athletic has SDSU in the Barstool Sports Arizona Bowl against Toledo.

One problem: The Aztecs have already played Toledo this season, and bowl organizers are avoiding rematches at all costs.

Another issue: The Aztecs played in the Frisco Bowl last year, and bowl organizers are also refusing to bring teams two years in a row (and a third time in five years).

CollegeFootballNews.com has the Aztecs going to the Barstool Sports Arizona Bowl against Buffalo.

CBSSports.com lets the Aztecs go to the Hawaii Bowl against Middle Tennessee.

Both the Hawaiian and Arizona bowls seem unlikely based on the information below.

The Union-Tribune is projecting SDSU for the New Mexico Bowl after reflecting on where other MW teams are likely headed.

Even with careful consideration, due to the extremely fluid nature of the process, predictions should be written in pencil rather than pen.

Here are some details on the final weekend of the regular season:

Current situation: So far, 74 teams have qualified for the bowl, leaving eight openings for the 82 available seats in 41 bowl games.

Also keep in mind: UNLV (4-7) must beat Nevada for a fifth win. If there aren’t enough teams with six wins to fill all the bowls, the Rebels could come in 5-7.

MW Backup Agreement: Guaranteed Rate Bowl (Dec. 27 vs. Big Ten or Big 12). This is off the table as both conferences have many qualified teams.

There’s also a guaranteed spot in an ESPN Events game, according to a Mountain West spokesman. This would likely be a bowl in the greater Dallas-Fort Worth area, but could be another ESPN-owned bowl that suits the network’s matchup desires.

With seven Bowl-eligible teams, the Mountain West must find landing spots for two teams outside of its primary ties.

The Mountain West champion goes to the Jimmy Kimmel LA Bowl as long as that team isn’t invited to a New Years Six game (this year’s AAC champion gets the Group of 5 seat).

The Barstool Sports Arizona Bowl has second pick and could earn the MW runner-up. SDSU could potentially be attractive due to its proximity, although the Aztecs struggled with the game’s title sponsor last year.

Other eligible teams will be distributed among the Hawaii, Famous Idaho Potato and New Mexico bowls as agreed between the conference and bowl partners.

Matchup, proximity to venue and history (how long has the team performed there) are taken into account.

Due to its proximity, the state of Utah is best suited for the famous Idaho Potato Bowl.

The Hawaii Bowl is believed to favor San Jose State. Simple explanation – the Spartans quarterback is Chevan Cordeiro, a Honolulu native who played in Hawaii for three years before moving to San Jose State.

This points the SDSU toward Albuquerque, although it wouldn’t be surprising for the Aztecs to end up somewhere else entirely while ESPN is wagging the dog.