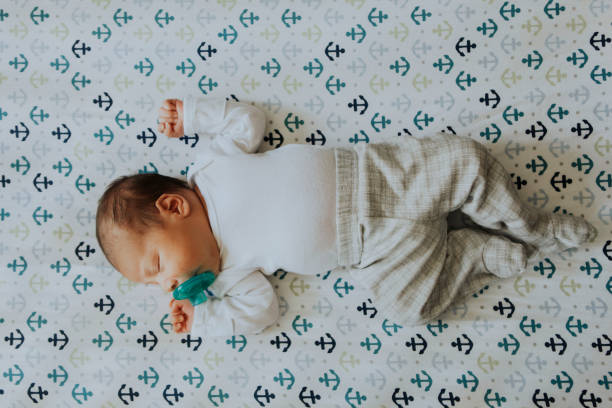 In 2020, the state of Georgia was ranked 15th by the Centers for Disease Control with a mortality rate of 6.1 infant deaths per 1,000 live births. To reduce the number of infant sleep-related deaths, the American Academy of Pediatrics (AAP) has updated its recommendations for safe infant sleep from those last recommended in 2016.

“We have made great strides in learning what keeps infants safe during their sleep, but much remains to be done,” said Rachel Y. Moon, MD, FAAP, lead author of the statement and technical report prepared by the AAP Task Force were created on Sudden Infant Death Syndrome and the AAP Committee on Fetus and Newborn.

In order for infants to have a safe sleeping environment, AAP recommends that parents sleep in the same room but not in the same bed as infants, preferably for at least the first six months.

According to the National Library of Medicine, sharing the bed can result in the larger person accidentally suffocating over the infant or pushing the infant into a dangerous location, such as a bed. B. between mattress and bed frame or wall.

The AAP also suggests that for any supine (supine) sleep, infants should sleep on a firm, non-reclining sleeping surface with no soft bedding.

The Academy says this type of sleep does not increase the risk of choking and aspiration in infants, even those with gastroesophageal reflux.

“Parents and caregivers remain concerned that an infant in a supine position could choke or aspirate. Parents often mistake coughing or retching, which is indicative of a normal protective gag reflex, for gagging or aspiration. Several studies in different countries have not shown an increased incidence of aspiration since switching to supine sleeping,” the AAP explained.

The AAP says side sleeping is unsafe and not recommended because it can increase the risk of rebreathing exhaled gases, which can lead to labored breathing and low blood oxygen levels. It also increases the risk of overheating, alters the infant’s autonomic control of the cardiovascular system, especially at 2 to 3 months of age, and increases the risk of sudden infant death syndrome (SIDS).

What’s happening in Savannah this weekend?

The infant’s sleeping surface should comply with the Consumer Product Safety Commission’s June 2021 rule that requires any infant sleep product to meet existing federal safety standards for cribs, bassinets, play areas and rollaway beds. Parents should not use any sleep products that are not specifically marketed for sleep.

Seating aids such as high chairs, car seats, strollers, swings, infant carriers, and baby slings are not recommended for routine hospital or home sleep, particularly for infants under 4 months of age.

Dressing the infant in layers of clothing is preferable to blankets and other covers to keep the infant warm while reducing the possibility of headgear or entrapment that could result from use of the blanket. However, care must be taken to select appropriately sized sleepwear and avoid overheating. Portable blankets can also be used. Nursing and hospital staff should model a safe sleeping arrangement for new parents after the birth.

Regarding swaddling, AAP says there is no evidence to recommend swaddling as a strategy to reduce the risk of SIDS. However, babies should lie on their back when changing and it should not be too tight. Weighted wraps, weighted clothing, or weighted objects on or near the baby are not safe and are not recommended. If an infant shows signs of attempting to roll (which usually occurs after 3 to 4 months but can occur earlier), swaddling is no longer appropriate as it could increase the risk of choking if the swaddled infant rolls onto the prone position.

AAP also suggests offering a pacifier at nap and bedtime to reduce the risk of SIDS. Several case-control studies and 2 meta-analyses have reported a protective effect of pacifiers on the incidence of SIDS, with a 50% to 90% reduced risk of SIDS.

The academy says the mechanism for the apparent protective effect is still unclear, but a favorable change in autonomic control during sleep in term and preterm infants and the maintenance of airway patency during sleep was suggested.

A policy statement on oral habits from the American Academy of Pediatric Dentistry states that non-nutritive sucking behaviors such as fingers or pacifiers are considered normal in infants and young children, and that sucking habits in children as young as 3 years old are generally unlikely to cause long-term problems . They suggest that the use of pacifiers after the age of 4 is discouraged.