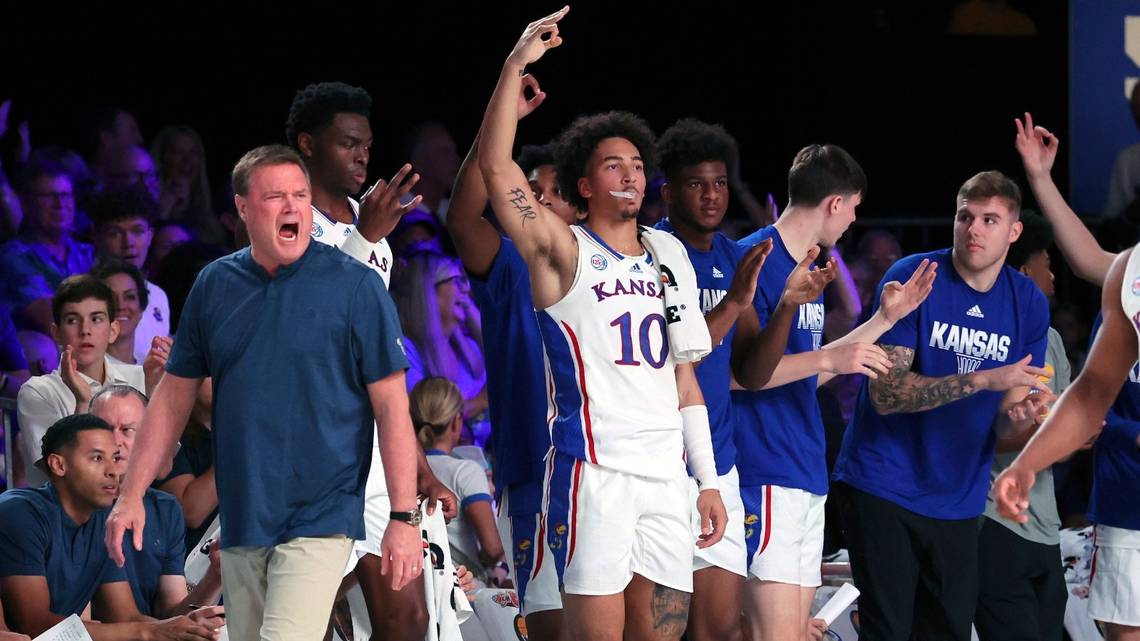 The No. 3 men’s basketball team from Kansas celebrated the return of head coach Bill Self to the bench by defeating the unranked state of North Carolina 80-74 in a Battle 4 Atlantis first round game at the Imperial Arena at Atlantis on Wednesday resort.

Gradey Dick drilled six threes in the first half to finish with a career-high 25 points while Jalen Wilson added 19 points and 11 rebounds. The Jayhawks (5-0) advanced to the semifinals against Wisconsin at 10 a.m. Thursday.

Dick’s six first-half threes were the second most by a Jayhawk in a half in KU history. Jeff Boschee hit seven threes in one half on March 9, 2000 against Kansas State.

Terry Brown holds the record for most three-pointers in a game in KU history. In 1991, he hit 11 against North Carolina State.

Kevin McCullar had 10 points and 11 rebounds and Dajuan Harris added 14 points and six assists for KU, who entered the tournament 4-0 in games coached by assistant Norm Roberts. Roberts had directed KU to win Omaha, North Dakota State, Duke and Southern Utah as Self was serving a four-game suspension imposed by the program.

Casey Morsell had 21 points for NC State that fell to an all-time 1-12 against KU. The Jayhawks have won 12 straight games against the Wolfpack.

Tuesday’s game was tight throughout. Dick hit three early threes as the two teams played to a 15-15 draw, leaving 11-14 in the first half. Dick continued to score and closed with his sixth three of the half to give KU a 39-31 halftime lead. Wilson had nine points and KJ Adams added six in the half.

Morsell and Terquavion Smith each hit two threes and had 10 points each in the first half. The Jayhawks led by as many as eight during that period.

Morsell scored eight straight points to open the second half that tied the game at 39 with a 17:57 play.

KU reduced the lead to eight, 55-47. The result was 49-47 when McCullar saved a ball from going wide and passed it to Ernest Udeh, who scored on the edge. After a technical foul on Wolfpack Coch Kevin Keatts, Dick hit two free throws. Then Wilson hit two more for the eight-point lead.

KU held a nine-point lead (58-49) with 11:14, which broke three free throws from Dick, who was fouled while shooting a three-pointer.

Things stayed tight on the line. KU led 71-68 with 3:42 to play. Wilson hit a free throw, Dick hit a reverse layup, and Wilson made two more free throws to separate the Jayhawks 76-68.

Gary Bedore covers all aspects of Kansas basketball for The Star—the current team, past players and coaches, and recruiting. He attended KU and was born and raised in Chicago and Lisle, Illinois.