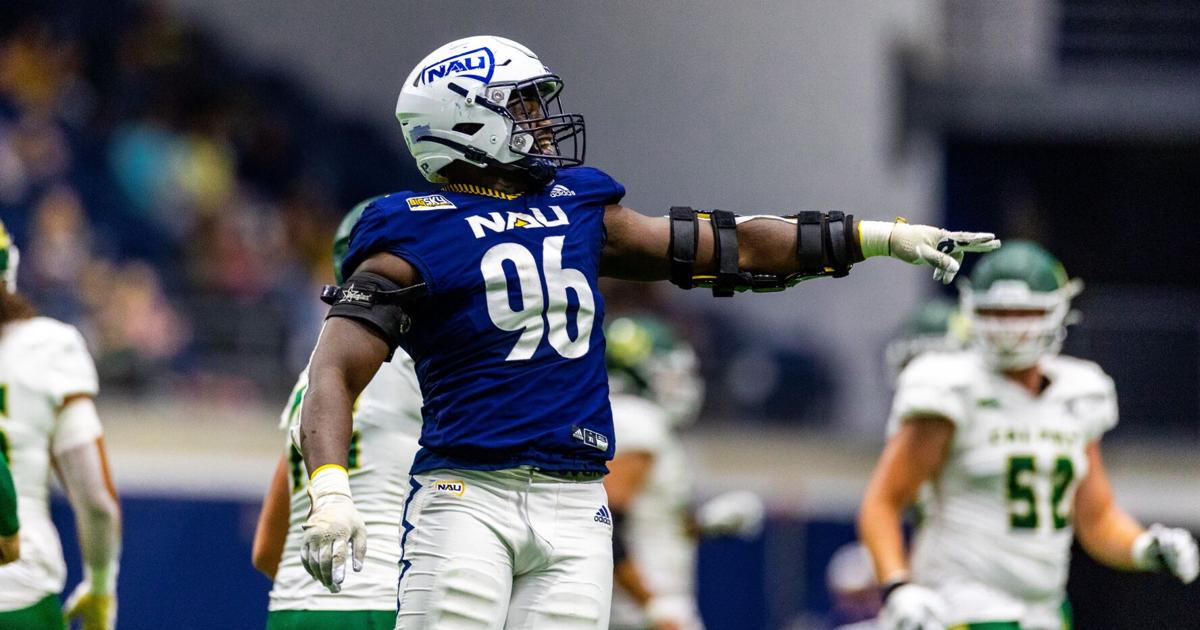 Vest, who finished his logging career with 260 tackles and has held first place on the program since 2000, finished second in Big Sky that season with 102 tackles.

The total ranks sixth for a Lumberjack player in a single season since 1995, just behind his own 106 from 2021. Vest also finished fifth in Big Sky with 11 passes defended this fall, as he made his second consecutive season received second-team honors and ended the third straight season with All-Big Sky recognition.

His 16 career sacks rank sixth on the program since 2000, while his 26.5 career tackles for losses since 2000 ranks seventh in northern Arizona.

Owen earned his second postseason honor of his career from Big Sky, finishing second in the conference with 6.9 receptions per game and seventh at 690 yards. Owen, who played nine games this season, moved up to 21st all-time in receiving yards while ranking just outside the all-time top 10 with 123 receptions.

Rounding out the Big Sky honors, Johnson and Hall received honorable mentions for their roles on the Lumberjacks offense. Hall ranked seventh in all-purpose yards at the Big Sky with 546 rushing yards and 344 receiving yards, both career highs in a season for the running back, as well as 128 kick return yards. With 50 receivers in 2022, Hall’s total catch is the highest for a non-receiver in northern Arizona in more than a decade.

Johnson moved up to eighth all-time in receiving yards and sixth in receiving after finishing the 2022 season with 60 receptions for 671 yards. Johnson’s second straight season as an honorable mention included three 100-yard games, with all five of his touchdowns coming in the last six games of the season.

While Vest and Poutasi graduate this year, Cosmas Kwete, Eloi Kwete, Owen, Johnson and Hall are expected to return to the Lumberjacks in 2023.

The Lumberjacks swim and dive teams split between the Lumberjack Diving Invite and the TYR/CMU Invitational last weekend, and Makenna Sammons and Casey Craffey were named WAC Diver of the Week and Swimmer of the Week, respectively.

Craffey earned the Lumberjacks’ first singles win at the TYR/CMU Invitational when she swam a 4:51.72 in the 500 freestyle. Craffey’s time earned her an NCAA Division IB cut when the sophomore swam two seconds below her career best.

Craffey also secured a win in the 1,650 freestyle, taking first place with a time of 16:50.62, beating her own competition record previously set in last year’s Invitational and finishing 20 seconds ahead of second place.

Sammons capped a successful weekend during her team’s first Lumberjack Diving Invite of the year by finishing on the podium at three out of four events and finishing in the top five four times. Sammons took second place to open the invitation in the 3 meter boards with a score of 274.05.

Sammons finished third on the 1-meter boards with an NCAA qualifying score of 270.90. The sophomore placed fourth in the platform jump with a score of 209.45 and finished the invite with a third-place finish in the relay jump with teammates Victoria Knapp and Grace Wesche.