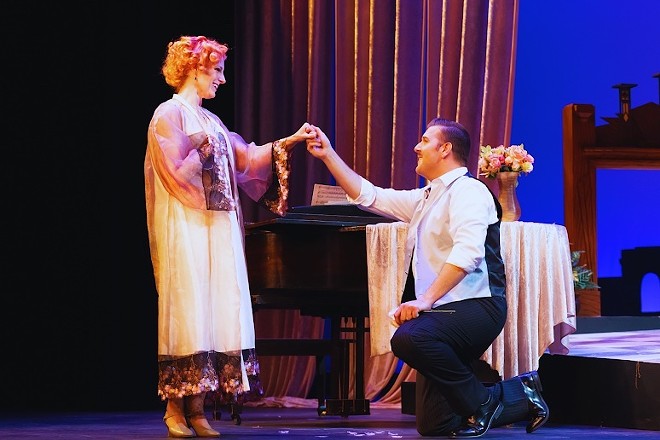 Magda (Karen Kanakis) accepts the admiration of a guest (Michael Oelkers) in her residency in La Rondine at Winter Opera Saint Louis.

The gilded glamor of 1920s Paris is the backdrop for Giacomo Puccini La Rondine (The swallow), a story about love found and left behind. Led by conductor Scott Schoonover and stage director Eric Gibson, Winter Opera Saint Louis’ production was thoroughly beguiling, from the quality of the vocals and vivid performances to the beautiful stage and costume design and the captivating melodies.

Early in the story, Rambaldo and his lover Magda are entertaining as the poet Prunier laments that Paris is being plagued by a plague of romantic love. Rambaldo and the other guests mock the poet; only Magda shows interest. She ends Prunier’s foray into a long-gone memory, sparking her own dormant longing. Disguised and using the name Paulette, she meets Ruggero at a restaurant. They fall in love while dancing and decide to run away together.

Unfortunately, life and Puccini are more realistic, leaving Magda with a heartbreaking choice. The two flee the city and live happily ever after until they run out of money. Ruggero writes to his family and his mother replies that she is delighted that he has found a good, virtuous woman to marry. Upon hearing his mother’s reply, Magda decides she can no longer mislead Ruggero and confesses her past as a courtesan. Ruggero insists he still loves her. Prunier and Lisette arrive arguing. Prunier tells Magda that Rambaldo will take her back. Lisette asks Magda to take her back as her maid. The previous balance is restored, but at what cost?

Karen Kanakis captivates as Magda with a silky smooth soprano that is delicate through control, not lack of power. Her performance is similarly expressive. Rather than being forced or caricatured, an easy choice for the lighthearted if ultimately heartbreaking opera, Kanakis gives us a fluid and fully integrated performance. As Magda’s new love Ruggero, Nathan Schafer’s buttery high baritone matches Kanakis’ vocal tone and texture, while his character delights in basking in Magda’s brighter light. Our willingness to cheer for the lovers is key to the opera’s appeal, and somehow softens the blow when the inevitability of real life bursts through the door. Kanakis and Schafer’s voices pair so well that their duets are naturally enhanced by the pairing.

Unlike Kanakis and still compliments, Lauren Nash Silberstein is a bright, sparkling, soprano-voiced coquette as Magda’s maid (and poet Prunier’s secret love) Lisette. The two women display an easy camaraderie, using their voices, knowing looks and interactions to build a genuine friendship. Nicholas Huff and Jacob Lassetter are well cast as Prunier and Rambaldo, both have strong, resonant voices and can easily attract attention when the scene calls for it.

One of the most surprising aspects of Puccini’s La Rondine is that it is fairly accessible to those new to opera. You don’t need to know the story or understand the language to enjoy the show. In addition to the projected English lyrics, the simple plot synopsis and effective staging allow audiences to fully enjoy the lush, pleasant score that follows the tragi-comic love story.

The performances for La Rondine at winter opera have passed something. Check out their next event, Holidays on the Hill Dominic is on the hill (5101 Wilson Avenue), 12th-13th December. The event includes a four-course meal and a concert sung by winter opera artists. The next opera they will stage is Macbeth by Giuseppe Verdi on January 20th and 22nd.

Coming Soon: Riverfront Times Daily Newsletter. We send you a handful of interesting stories from St. Louis every morning. Subscribe now so you don’t miss anything.

GEEKOM's Black Friday Sale reduces mini PCs by up to 29%