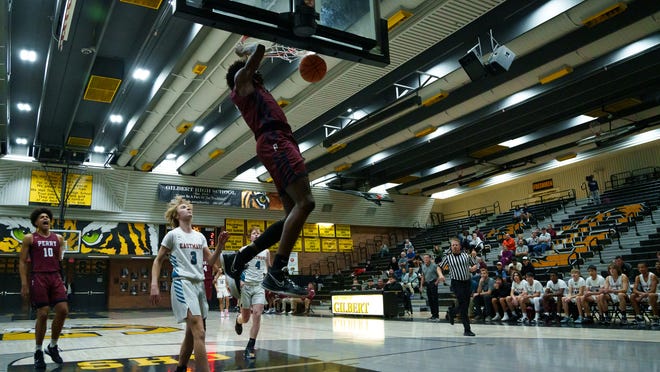 This week’s Arizona High School Thanksgiving basketball tournaments provided a glimpse of what lies ahead this season as the shot clock took center stage and star players emerged.

As announced, Gilbert Perry is a top-25 team in the nation that will find few if any challenges this season. Perhaps next Tuesday’s game at Peoria Liberty will be the test the defending 6A state champions Pumas will need. The first few days of Gilbert’s Welcome to the Jungle tournament showcased the devastating one-two that 6-foot-8 sophomore Koa Peat and 6-8 senior Cody Williams can throw at teams. They quickly defeated Mesa Eastmark and easily won 85-31 as Peat scored 17 points in the first half. Coach Sam Duane Jr. emptied the bench after a few minutes in the second half. Perry then sprinted out to an 18-0 lead after a quarter on Tuesday, then scored 26 points in the second quarter and 23 in the third in a 77-21 loss to Mesa Desert Ridge. On Wednesday, the Pumas swept past Tempe Corona del Sol 82-27, Williams had 23 points and six assists, Peat had 15 points and seven rebounds and guard Barron Silsby had 13 points. They were supposed to finish the show on Friday at 5pm against Queen Creek Casteel.

“The most important thing right now is that our guys really share the ball, find the open guy and really play for each other,” Duane said.

Perry’s length, versatility and complementary parts around the two 5 star recruits make this team special. They are also all very selfless. Ben Egbo and D’Andre Harrison are very athletic, crashing the boards and coming down the court quickly to finish in transition. They defend very well in all five positions.

And the 35-second shot clock, used for the first time this year by the Arizona Interscholastic Association, will only make watching Perry on both ends of the court more exciting as teams look to work the shot clock down. With Perry’s length, there will be plenty of shot clock violations against Perry as teams try to force shots before it wears off.

“I thought it was good,” Duane said of the shot clock on day one, which Perry started with a 15-0 run against Eastmark.

“We’re used to the shot clock,” Williams said. “A lot of our players have played with it (at AAU games). And we use it in practice, so we’re used to it.”

“Anyone can score,” said the Colorado obligee.

It’s amazing to see Peoria score 100 points on Phoenix Mountain Pointe in a 47-point win on day one of the Nike Showdown, held at Goodyear Millennium High School. But when you see how depleted the Mountain Pointe roster became because top players left, you can understand why. Tru Washington and Mark Brown went to local prep academies. The Patton brothers moved to California. There are a few players waiting to qualify. A team that at some point in June expected to give Perry a run for the inaugural Open Division state championship is now just trying to be competitive.

But also give Peoria credit. This could be coach Patrick Battillo’s best team likely to play for an Open Division knockout round, another innovation added by the AIA for the high school playoffs this season. A key driver will be guard Andrew Camacho, who lost 36 points on Mountain Pointe. He was just warming up. Peoria defeated Buckeye Verrado 83-34 the next day with Camacho scoring 45 points. The Panthers were scheduled to host Millennium on Friday night at 7 p.m.

Calvin Windley and Caden Bass surround Camacho making it a dynamic team after him for 36 minutes. Windley had 24 points and 12 rebounds and Bass had 22 points and five rebounds against Mountain Pointe.

Is it too early to celebrate the Scottsdale Desert Mountain basketball team? The Wolves got a jump-start from house brothers – newcomers Kaden and Kalek, 6-3 Combo Guards. They are the son of former Arizona State and NBA guard Eddie House and the brother of Jaelen House, who won four state championship rings while playing for Shadow Mountain. Desert Mountain is 2-0 behind the brothers in Mesa’s Fear the Hop and plays Gilbert Campo Verde in a semi-final on Friday at 6 p.m. Kaden House had 22 points in a 55-45 win over 6A runner-up Chandler Hamilton, with senior guard Zach Anderson adding 11 points. Michael, the son of former Shadow Mountain coach Mike Bibby, is the Wolves’ assistant coach. Michael Bibby is a first cousin of the House brothers.

American Leadership Academy Gilbert North, who rose from 3A to 4A this year, stunned hosts and 6A Mesa 57-51 on day one of Fear The Hop and then advanced to Friday’s semifinals against 4A champion Gilbert Mesquite with a 59 :57 victory over 5A Vail Cienega. Sophomore Dylan Novak puts on an MVP performance in the tournament. He had 20 points, including 8 of 8 free throws, to beat Mesa, who was ranked 7th in 6A by The Arizona Republic in the preseason. He followed with 15 points against Cienega while McGuire Andrus scored 20 points to lead the Eagles. Novak is coached by his father Dave Novak, who is in his third season leading ALA Gilbert North. This team only gets stronger when football season ends and highly acclaimed junior wide receiver Brandon Phelps joins the team. Dylan Novak, Andrus and Phelps all made the All-Region last basketball season when Dylan was the 3A Metro Region Player of the Year.

To suggest ideas for human interest stories and other news, reach Obert [email protected] or 602-316-8827. Follow him on Twitter@azc_obert