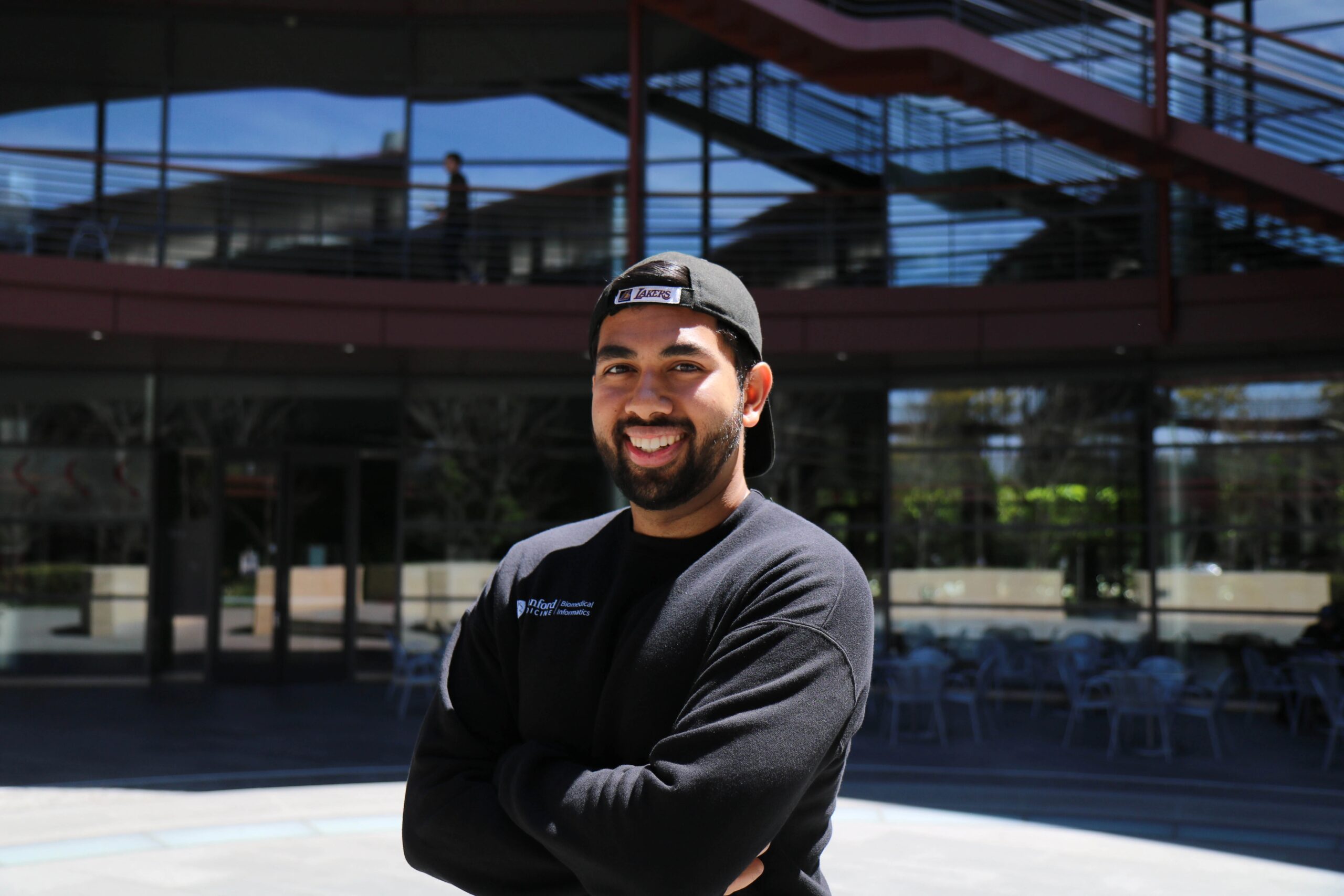 Yousuf Khan is a 25-year-old third-year Master and Ph.D. Student at Stanford. His Ph.D. is in Life Sciences and his Masters in Biomedical Informatics. Born and raised in the Maryland-Virginia area, he attended the University of Maryland for his bachelor’s degree. He lived in Europe for a year before coming to Stanford.

Yousuf recently took part in the Netflix game show Bullsh*t, where players compete for money. How to play:

There are three challengesers, and one person sits in the “hot seat”. A multiple-choice trivia question is presented to the hot-seat player. They select an answer and are discreetly informed whether they guessed correctly or not. If the hot seat platter chooses the correct answer, he stays in the game; If they answer the question wrong, they must try to convince the challengers that their guess is correct. The game tests both trivia and knowledge, with players competing for money.

The Daily sat down with Khan to hear about his experience on the show amid his promotion. work at Stanford.

The Stanford Daily [TSD]: How did you find out about the show and actually got into it?

Yousuf Khan [YK]: My friend Ziad Ali, who is also a Stanford sophomore, a third-year graduate student. in Electrical Engineering, appeared for one episode on a trivia show called “The Chase” which aired on ABC. After his show, they asked him, “Do you know people who are good at trivia?” Ziad knew I did Quiz Bowl in high school, and he was like, “Yeah! My friend Yousuf used to do a lot of small stuff.” So the producers of that show contacted me and I went through the entire testing process for The Chase, which included an online quiz, an interview, and an in-person quiz show. They liked me, but they said, ‘Oh, actually, there’s this other show on Netflix that we’re trying to do. Maybe you’d be better for it” — and I said, “Okay, sounds great.” And that was a year ago. So for over a year I got random calls from people and had to do online quizzes, in-person quizzes, in-person interviews and everything. Finally, in September 2021, they said, “Hey, come to New Mexico in two days!”

I got there and even at the airport they told me straight away, ‘You’re not allowed to talk to anyone except people who are on the show. You cannot talk to other participants. We’re trying to make sure no one knows anything about anyone before this game, because if someone knows you’re from Stanford and you’re really good at science, it gives you an edge over other contestants. They’ll know you’re really good at science and they’ll trust you more.” My code name was Strawberry Shortcake.

YK: No, not until filming has started. My car from the airport had a label that said “Strawberry Shortcake.” They took me to the hotel in Albuquerque because Netflix’s film studio is there. They dressed me, made me up and took pictures of me. They did the same with other candidates, but I couldn’t speak to them.

When I got up to film the next day, they took us to Netflix’s main campus. It was really cool. There they filmed “Breaking Bad” and “Stranger Things”. I saw some of the sets which was really cool. When I arrived they immediately did COVID tests. If you tested positive, you went home and couldn’t attend the show. I said, “I hope a guy who was sitting next to me on the plane didn’t give me COVID.” But it was all good – no problems. Then they took us to the dressing room for makeup. We had rooms locked off from everyone else. They checked our clothes, our makeup, everything, and it all took about five hours, which was really long. Eventually one of the producers came into my room, shut the door and said, “We want you to be the person who opens the show.”

I thought, “Oh?” He said, “That means you can automatically compete for money right off the bat.” I thought, “Yeah. Let’s go. I’m ready to go All right – we’re going in. We’re going in.” 10 minutes later we entered the set.

I got there, I got up and Howie Mandel came out and said, ‘Nice to meet you.’ I was like, ‘What? For example, what’s going on?

TSD: That is so cool!

YK: Yes! Then the shooting took even longer. It took about 10 hours to film and they cut out a lot of stuff like interviews, different takes, walking shots. So that was the fun, Hollywood part of it. It was nice to be a star for a few days I think.

TSD: What made you decide to do the show? Wanted the experience of being a star for a day?

YK: No, nothing like that. I had done trivia shows in high school. I had done a lot of quiz bowls and been on a few local and regional television shows. I think they’re still on YouTube, the videos from when I was 17 or something. So I had done some trivia shows before. I thought, “Oh, that sounds fun. I like little things!” I thought it would be fun to try and win some money, so I thought I’d brush up on the little things again and try to do my best.

TSD: That makes sense. When you film the show, are they telling you anything, or is it all pretty authentic?

YK: You cut out so much. I’m so grateful to them because I thought I made a fool of myself looking at the footage before editing. I looked so much more normal than I expected so I’m super happy they did. Everything you saw on the show is 100 percent authentic. The only thing that might be a little different is that they make cuts, so some reactions on the show might not have been exactly where they were. But for the most part, I’d say it’s 99 percent pretty honest.

TSD: That’s good to hear. Do you have any favorite experiences you had while on the show?

YK: My favorite part was actually playing the game. The game was super fun, really amazing – and super scary. I practiced so much – I had all these preparations and practices with friends. I made some practice fake answers. The moment I got on the show and started playing it was so stressful and so nerve wracking that I completely forgot everything I had been practicing for. I thought to myself, “I’m just here to do my best.”

TSD: That’s a good attitude. How did you find the time for the show and also for your promotion?

YK: That’s a good question. I still don’t know for sure. It was really hectic. At the same time I was practicing trivia for the show, I was also in a class or two, and I was doing my Ph.D. Researching and preparing for an interview at Google for an internship – that was super stressful. Between experiments and assignments and other stuff, I tried to study for three to four hours a day for the show.

TSD: Sounds like it! Do you think you’re a good liar considering you’ve been on a show that rewards you for lying?

YK: Absolutely not. Everyone likes to think they’re a good liar, but I’ve gotten so many roasts from everyone who knows me. They all said, “We knew right away whether you lied or not.” Everyone said, “Oh my god, you’re the worst liar ever,” so I don’t think I’m a big liar — but I just am so good I survived the questions I had to get. But no spoilers!

TSD: Have there been any particularly funny or outrageous lies you have told in your life?

YK: This is more terrifying than outrageous. I interviewed for the Knight Hennessy Scholarship in 2019. After the interview, all interviewees went to a bar nearby. As the night wore on I was enjoying myself and for some reason I happened to start talking to this person – as a reference I was still living in England at the time – pretending to be from England. I have a full English accent. I thought my accent was decent. The person found it at least passable. I had a long talk with him. He was super nice. I think he even invited me over to his house with him and his friends for a little bit, so I had to keep that accent up for a few hours, which is awful. I thought, “This is so scary. Why did I do this? I’m literally an idiot.” So that was the most blatant lie I’ve pulled. I’m still ashamed about it.

This interview has been edited slightly for clarity.