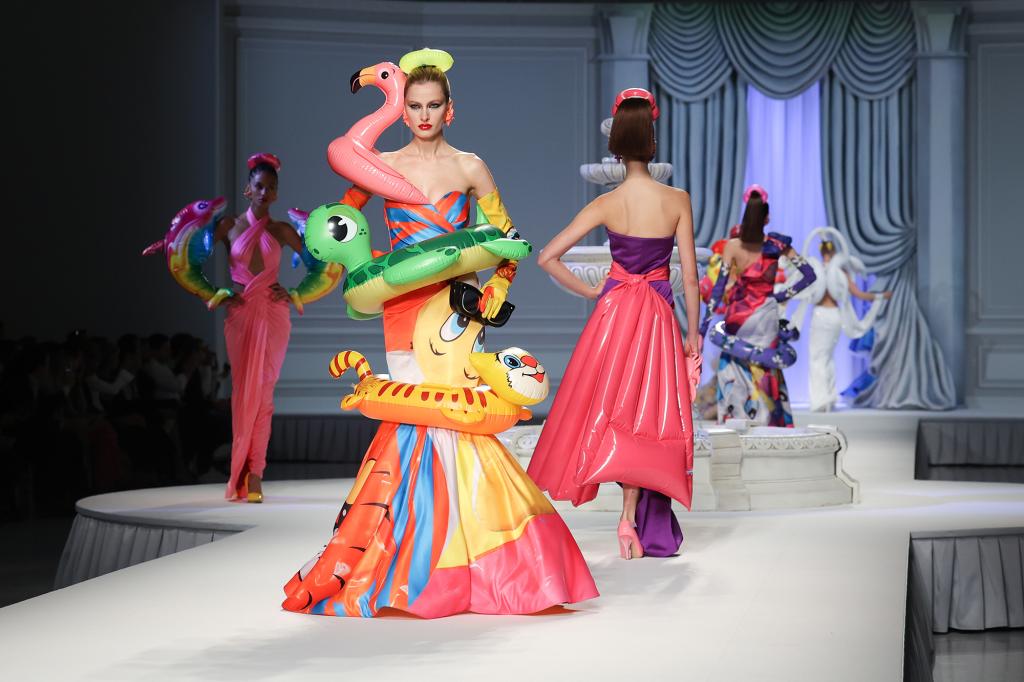 The pre-pandemic fashion delirium is back.

After several COVID-related quiet seasons, Milan Fashion Week is returning to its pre-pandemic glory, with crowded seating, deadlocked streets and sidewalks packed with fashionistas craving a glimpse of stars and influencers.

After much pandemic talk about how the fashion system needed to change — i.e. slow down — few could resist returning to the world as they knew it, no matter how much traffic and bustle it generated.

This week’s runway shows conclude with the return of another Milanese tradition: the Green Carpet Awards, recognizing advances in sustainability.

Here are some highlights from Thursday’s preview of womenswear for next spring summer on day two of Milan Fashion Week:

The latest collection by Miuccia Prada and Raf Simons explores the space between minimalism and decoration, with clean silhouettes and transparent materials.

The collection begins with fitted, slightly cropped bodysuits made from poplin shirts in industrial colors like gray and ivory. They are worn under boxy jackets and longer opera coats, then finally a loose fitting dress made of raw silk with pretty lace details, reminiscent of a nightgown.

“The dresses are about simplicity without unnecessary complications,” Prada said in the show notes. ” Politically, theoretically, aesthetically, we always feel drawn to these terms. The idea of ​​directness.”

The silhouette was simple. Clothes envelop the body as casually as a towel after a shower. Sheer, fabric-like coats conveyed a sense of lightness. Naive floral appliques adorn handbags and jackets, sometimes holding a strip of fabric in place.

Androgyny also underlined the collection with the feminine accents, especially in the uniform looks from Prada: jumpsuits, narrow trousers and jackets. Shoes were snub-toed Mary Janes or loafers. Bags of the season included the Prada inverted triangle handbag and large tote bags in contrasting pink or lime.

“More than any other collection, this one is filled with diverse views. There is a mirror of cinema in the collection that witnesses fragments of a larger whole,” said Simons.

Max Mara is lost in thought

The Max Mara silhouette for next season evokes feminine modernity, with voluminous navy trousers and skirts that morph from being tight at the hips into a cascading stream of sweeping movements. The volumes — also evident in boxy jackets and oversized coats — are balanced with off-the-shoulder halters and crop tops.

Creative director Ian Griffiths said he took inspiration from the female intellectuals of the 1930s on the French Riviera, citing Renee Perle, the muse and lover of photographer Jacques-Henri Lartigue and architect Eileen Gray. The collection has a purposeful androgyny, with David Bowie in loose 1980s trousers appearing on Griffith’s mood board.

They are looks that invite contemplation while offering unrestricted movement for a woman focused on intellectual pursuits.

For next season, Max Mara presented a neutral color of raw linen, which can range from gray to khaki, accented by soothing sun-bleached yellows, greens and blues, creating a harmonious trio in a roomy coat and a Bathing suit was born, completed with a knitted bathing cap.

The pockets are big enough for a weekend trip. Shoes are platform sandals. And hats have oversized brims.

Jeremey Scott wanted to give a boost to the global discourse. And he couldn’t have been more literal with a Moschino Spring-Summer 2023 collection that incorporated inflatable pool floaties into looks with more than a touch of whimsical ingenuity.

Plastic ring floaties added structure to the hems, while a pool float became a tongue-in-cheek stole. Blow-up references were everywhere: from cleavages to bra cups to shoes and even bags. Most often, the floaties were part of the garment, like the inflatable lapels of a black pants suit. Life buoys also came into their own as headgear and inflatable peplums.

Among it all was a collection that took summer seriously, with a plethora of warm-weather blue or yellow suits, with handsome white trimmings; fun striped cropped outfits reminiscent of beach umbrellas accented with flotation bracelets; and often-neglected swimsuits, here in bright cartoon prints with an inflatable plastic jacket, hat and matching bag.

Scott said in show notes that the references are a direct use of the word “inflation.”

But under the inflatable Hijinx, there were also more stealthy numbers.

“Ultimately, it’s about balancing the negativity…even if the rest of the water is shaded gray. That’s where joy can be found,” Moschino said in notes

The Free Spirit by Emporio Armani

For his more youthful Emporio Armani collection, Giorgio Armani created looks that are good for travel and called the new collection “In Transit”. A shadow cast by a Japanese torii gate in the background of the show indicated a goal.

The collection was rooted in neutral and calm tones, with soothing movements created by pleats, beads, sequins and prints. Soft jackets gave simple definition to summer wear, with loose trousers that were often gathered at the ankle. See-through sheer layers were worn over pants, as dresses, or even as flowy, elegant jumpsuits. Smart wrap pants cut a modern silhouette with a sheer knit waistcoat

Armani, 88, received a long, appreciative round of applause at the end of the show.

“It’s contrast. Never be predictable. So this is not predictable for us. And the collection is unpredictable, so two mistakes made one right,” Dan Caten said backstage after the show.

The designers chose the most transparent textiles to create their summer layers: a blue lace jacket over a sheer yellow printed skirt, worn with plaid beach tops. Loud 1970s orange plaids happily collided with green and brown floral patterns, while orange and green stripes contrasted with diagonal blue stripes, toned down with a sheer green jacket.

The twins redefined the teeny bikini, pairing a top with oversized swim trunks over white bottoms for the ultimate surf look.

Makeup was low key and cool, a blue lip or green eyelid. 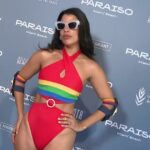 Paraiso Miami Beach Swim Week is Back: ‘It’s the Fun Time of the Year’ 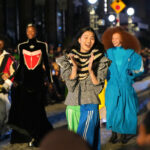 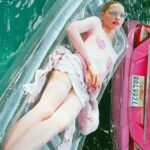 Blumarine has been rebooted for the Y2K era. What’s next? 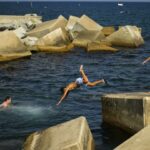 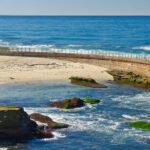 La Jolla Children’s Pool Seawall “for the next 100 years” could cost $2.3 million to repair 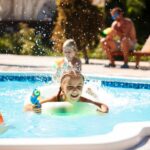