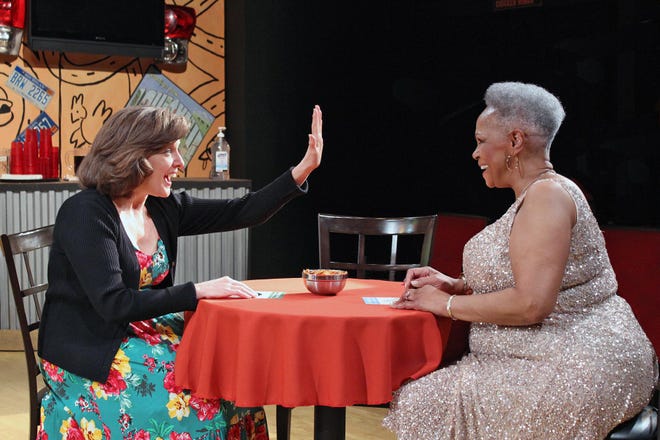 The play was chosen ahead of the pandemic, but the events of recent years have increased the need for work on the themes of Tracy Jones, which opens at the Williamston Theater this month. It runs until June 19th.

The comedy, a new work Williamston is co-producing this season with theaters in New York and Florida, is set in the back room of a chain restaurant where Tracy Jones is throwing a party for everyone who shares her name. It’s also a co-production with Northville’s Tipping Point Theater, so when the show ends in Williamston, it will pack up and move to the other theater immediately, and the actors and technical staff will get another several weeks of work.

Director Tony Caselli, who is also the theater’s artistic director, first came across the script when a friend sent it to him. The National New Play Network promotes new works by helping organize so-called “rolling world premieres,” where a show opens in multiple theaters and all are credited as premieres.

Written by Stephen Kaplan, Tracy Jones touches on loneliness and isolation, themes that have been intensified during the pandemic. Full of laughter and humor while touching on blue subjects, the playwright calls it a sad farce. Caselli said he was immediately drawn to the script when he read it in early 2019.

“It’s really funny and really cute,” Caselli said. “Then I found it on the New Play Exchange Network and started sharing it with other theaters I’ve worked with.”

As he read it, isolation was something he felt came from technology, social media, and the division of the world in general. They staged a reading of the play on Giving Tuesday in 2019 and scheduled it for their next season — a season that would be canceled by COVID.

“People loved it,” Caselli said. “It was clear that we wanted to produce this. It was so fun and heartfelt. I love those tracks that make you laugh and make you cry, and in this case loneliness makes you call people you love. These are our three key points.

When the world shut down, much of the networking for new plays continued, and theater producers read more scripts and shared information. Everyone, Caselli said, was making schedule after schedule for when they thought they could reopen. Caselli used this time to recruit other theaters to join them in the rolling world premiere.

Williamston is the second of the two theaters to premiere the show. The first took place earlier this spring on the Center Stage in Rochester, NY. Caselli said he drove to Buffalo, where he has family, so he could see the show. He spent the weekend with his relatives and then drove the extra hour to see the Sunday matinee. However, a large storm hit and half of Rochester lost power, so they canceled the show. However, he met the director of the other show, the playwright, and watched the set.

Since these are rolling world premieres, the playwright is involved in all productions. After Center Stage production was finished, Kaplan tweaked the script and Williamston received an updated version a few days before rehearsals began. While they are in rehearsal, the playwright receives the daily rehearsal notes with the playwright section included.

“I just love that part of the new game process,” said Caselli. “It’s more fun when it happens with three theaters in a row, and the playwright can see it in a proscenium in Rochester, and then he gets to our tiny, 100-seat, three-quarter push. Then the Inseltheater is a completely different version. It’s a great opportunity to see how it works with different artistic teams. The piece is so fun, all these opportunities are a great opportunity for him to really polish.”

The show takes place in the fun party zone of Jones Street Bar and Grill: The Place for Wings and Things, a restaurant modeled after Bennigan’s, TGIF and Chili’s. The stage set extends to the walls behind the audience. The walls are covered in stuff that screams “fun”.

“It’s so hectic, frenetic, business-driven, no heart but all the fun on the walls,” Caselli said. “There’s all that stuff on the stage wall of the restaurant space, but some of it will go around the audience, behind them and over their heads to draw them into the space. We wanted them to feel like they were in the same room with the actors.”

The cast consists of Emily Sutton Smith, Madelyn Porter, Steve DeBruyne and Allison Megroet. Two of them, Sutton Smith and Megroet, were featured in the original reading back in 2019. Aside from Sutton Smith, one of the company’s founders, none of the other actors have appeared on Williamston’s stage in a full production. However, Caselli said he knew them all.

Caselli said Megroet is very funny, but usually when they’re looking for actors with younger looks, they pull away from Michigan State University through their partnership with the Department of Theater. However, due to uncertainty as to when the students would return, Caselli said he offered the role directly to Megroet.

“She comes in with such energy,” Caselli said. “The three other people are older than her and she comes in with this burst of youthful energy. The character is — perky doesn’t even cut it. She’s so caffeinated and fun and motivated to help that she just fills the room and it’s delightful.”

DeBruyne is the founder and artistic director of The DIO, a dinner theater in Pinckney. Caselli has seen DeBruyne’s work outside and at the Encore Musical Theater and said it felt good.

Porter is well known in Detroit and Michigan. Her acting career spans 40 years and in 2019 she was named a Kresge Artist Fellow. Tipping Point’s artistic director, James Kuhl, was the one who suggested Porter for the role. She submitted a video audition.

“We just loved her and so it was easy to say please come and do this show,” Caselli said.

The reason this show makes for a delightful evening of theater, Caselli said, is that it’s funny but also a thoughtful play about loneliness and isolation.

“It feels even more relevant and meaningful and moving now coming out of the pandemic and the lockdowns and all of that stuff,” Caselli said. “I want everyone to see it and have a little catharsis of the collective trauma that we’ve all come to terms with. Laugh with us and cry with us and say we really can all get through this. It’s a wonderful reminder that the best thing we can do is remember that all we have is each other.”

When: Until June 19th