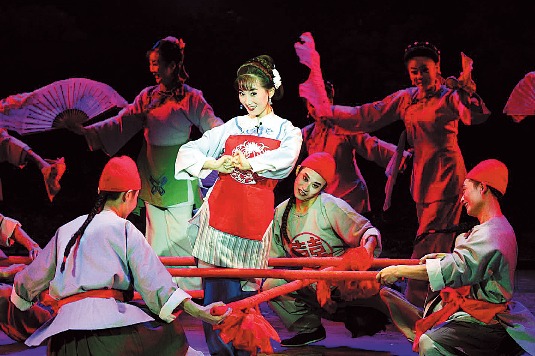 After the outbreak of the COVID-19 pandemic, Liu, head of the Huangmeixi Opera Troupe of Huaining County, Anhui Province, began holding online meetings to discuss how theater staff and artists can stay busy.

The theater company usually stages about 120 shows each year in villages and schools in Huaining, and also performs in nearby cities. The sudden halt to the regular performance schedule made Liu pause to contemplate the troupe’s future before realizing that online platforms could provide a stage for the ensemble.

Since January, Liu’s troupe, which has a 66-year history, has held livestream performances almost every night. From 7:30 p.m. to 10:30 p.m., the artists, mainly young people wearing either makeup and costumes or their everyday clothes, perform classic and popular pieces of Huangmeixi Opera on the Douyin short video platform, where they also tell their stories Learning the ancient art form and presenting their daily practice sessions.

The performers, who quickly garnered a large following, now have almost 700,000 followers on Douyin. To their great surprise, an estimated 10,000 viewers log in to watch their shows every night. Audiences come from areas where Huangmeixi Opera is popular, such as Anhui and Hubei provinces, as well as from overseas.

Liu said, “I read the messages left by viewers during the live streaming broadcasts. It’s a whole new way of interacting with the audience.” She added that while her audience at the theater was mostly seniors, the livestream shows were mostly watched by young people.

One fan wrote: “I had never heard the Huangmeixi Opera and had no idea the songs were so beautiful. I’m 25 years old and I really enjoy the songs. This is definitely not an art form for the elderly.”

Holding virtual shows has become an important new strategy for the company as it struggles to survive due to canceled rehearsals and performances, Liu said.

Unlike some companies that offer live-streamed content from their previous shows, the performers at Huaining County’s Huangmeixi Opera Troupe sing in different ways.