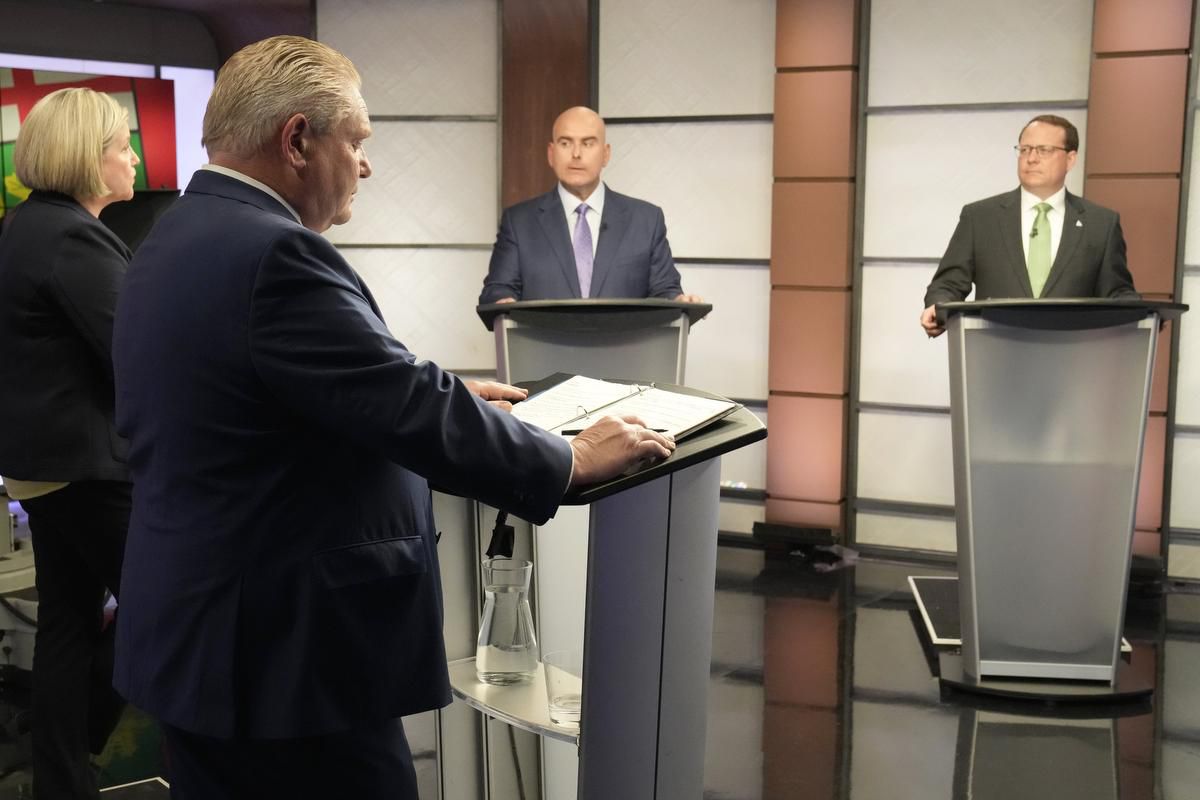 It was about crisis management.

Ontario leaders’ debate has been dominated by the two-year COVID-19 crisis, the affordability crisis now threatening the post-pandemic recovery, and who is best placed to deal with the climate crisis.

As Ontario residents head to the polls on June 2, the four major party leaders met Monday night for a raucous 90-minute encounter about where the province was — and where it’s going. Doug Ford admitted he made mistakes during the COVID-19 pandemic, but the Progressive Conservative leader insisted he meant well.

In an electrifying exchange with Liberal leader Steven Del Duca, Ford said the pandemic was “the most challenging time of my entire life … and I wouldn’t wish that on any prime minister,” noting that he “apologized” when mistakes were made.

“Did we do everything right? No we didn’t get everything right but I’m telling you every decision I made was with the best of intentions, with the best medical advice I could get at the time,” the Tory leader said, noting for “two and a year and a half, literally 24/7, I’ve been working on this pandemic.” But Del Duca accused Ford of ignoring critical advice at a critical time, which fueled a third wave of COVID-19 last spring.

“Anyone watching at home knows that in February 2021, when the science table told Ford Conservatives, ‘Do not reopen anytime soon’ – and they ignored that this dramatically worsened subsequent waves of COVID for Ontario families,” he said the liberal leader.

“And then, when he got mixed up, he decided he wanted to close down playgrounds and give the police more carding powers unrelated to the challenge we were facing.”

That was a reference to Ford’s April 16, 2021, decision to impose controversial measures aimed at restricting the mobility of Ontario residents and curbing the spread of COVID-19.

A day later, amid public outcry, he reversed course to ensure children could play outside and motorists could drive freely without fear of police mapping.

Speaking to reporters after the debate, Ford said, “Not many elected officials come out and admit when they’re wrong.” “Many families watched as loved ones died of malnutrition and dehydration in nursing homes, as the armed forces showed us upon arrival,” Horwath said.

“I would have had an ‘iron ring’ put on seniors in long-term care,” she added, mocking Ford’s claim early in the pandemic that he was protecting the elderly in care.

The Tory leader seemed more comfortable and sure-footed as he discussed the economic recovery and affordability crisis Ontario residents are facing, with inflation at 6.7 percent, the highest since 1991.

“Mr. Del Duca, I just want to remind you that under you and former Prime Minister Kathleen Wynne, this province was destroyed, the economy went downhill faster than the Canadian bobsleigh team,” Ford said.

“We’re the only party saying yes to … building highways and important infrastructure like 413 and the Bradford bypass,” he said, promoting the proposed 413-mile Milton-to-Vaughan Highway 413 and 10 miles long ring road that connects highways 400 and 404. Schreiner — who, like Horwath and Del Duca, is opposed to the new highways that would level hundreds of acres of farms and greenbelt land — has blasted Ford’s environmental record.

“Mr. Ford … dismantled all of Ontario’s climate action plans and then he began to systematically dismantle environmental protections, many of which were actually put forward by former Conservative governments, notably Bill Davis,” the Green Party leader said.

Del Duca, a former transport secretary in Premier Wynne’s government, said Ford only wants to build Highway 413 “to make some of its donors richer.”

“It’s not going to do you any good,” he said, noting that Liberals scrapped the $10 billion proposal in 2018 because the route would have saved commuters little time.

The Grit boss countered that his “provincial buck-a-ride” plan, which ensures $1 fares on all public transit systems in Ontario by 2024, including TTC and GO, will help wallets and the environment.

Horwath said Highway 413 was “the wrong thing. It paves farmland. It’s paving the green belt… and what we don’t need are more massive highways to mansions that nobody can afford.”

The NDP leader also exercised some of her fire – and anger – at Del Duca, with every public opinion poll showing the two battling for second place behind Ford.

“With all due respect, you’ve had 15 years to do all these things and you didn’t do it,” Horwath said, interjecting as the Liberal recited a list of promises.

Del Duca replied, “Every time you attack me — like you’ve been doing for a year — Doug Ford smiles.”

“Progressives need real leadership and that’s what we provide,” the Liberal leader said.

Horwath countered that Ontario voters punished the Grits, who held office from 2003 to 2018, four years ago and have not yet forgiven them.

After Del Duca chastised the Tory for contesting the last election again – “Mr. Ford seems to be the only person on the scene who doesn’t realize he’s been prime minister for the past four years,” the NDP leader rushed.

“I understand why you don’t want to talk about the 2018 election because you only retained seven seats and that’s because you disappointed Ontario residents,” Horwath said.

Ford has taken his own beatings against the New Democrats, yelling that several private sector unions have backed the Tories.

“You lost contact. You have no contact with the hardworking men and women…when the unions first back us. They know we’re going to make it,” he said. About 250 poster-bearers from all parties cheered and sang outside the TVO studios at Yonge Street and Eglinton Avenue while police and security forces led the leaders through the crowd.

Three purple-clad protesters from the Service Employees International Union, which represents healthcare workers, tried to block Ford’s campaign bus as it arrived but were removed. A SEIU member was injured and taken to the hospital.

A police officer removed a sign from a Ford trailer as he waved it en route toward Del Duca. It was then returned with a stern warning.

Robert Benzie is the Star’s Queen’s Park bureau chief and a reporter covering Ontario politics. Follow him on Twitter: @robertbenzie