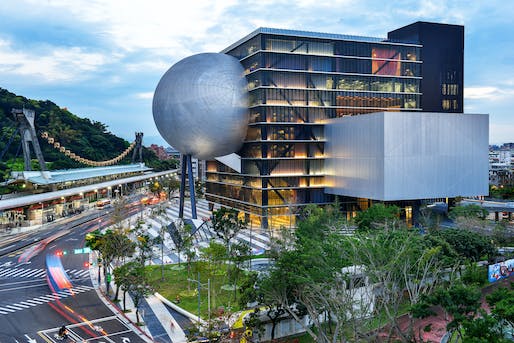 Now part of the capital’s Shilin Night Market, the new center houses two 800-seat theaters and a larger 1,500-seat venue and support areas, all linked by a centralizing cube-like shape that OMA founder Rem Koolhaas believes that they will liberate both patrons and performers from a crippling industry-wide trend.

“Theater has a very long tradition. We have seen contemporary performance theaters become increasingly standardized, with conservative internal operating principles. We want to contribute to the history of theatre,” Koolhaas explained in a statement. “Here in Taipei we were able to combine three auditoriums in a special way. We are excited to see how this architecture will impact on expanding our possibilities in the theater.”

Photos show the cubic form situated over a landscaped plaza connected to a feature called the Public Loop, which meanders through all three theaters and their backstage areas to offer views not seen in more reputable theater communities like London or Moscow would find it difficult. The configuration noticeably lacks a distinct front and back typical of more traditional theater designs.

Collaborating architect Kris Yao explains: “Not only does this new building present itself to the world as a brand new and unique configuration of theater complexes, it is also perfectly positioned – right in the center of Taipei’s plebeian life. Its informal, unpretentious and raw architectural spaces reflect the spirit of how Taipei citizens approach art.”

In August, the new theater officially opens its doors to the public. Check out more photos and a video of OMA’s latest cultural project below.

The flu vaccine could lower the risk of COVID