STILLWATER — The Oklahoma Coaches Association has selected their All-State football for appearances in the 2022 season and for the 2023 Coaches All-State Game. There are seven players with ties to the state of Oklahoma who have been selected to be honored.

Already on campus is Stillwater Center’s Jakobe Sanders and the 6-2, 325-pound Sanders were selected to play in the 2023 All-State Game. We believe this is the highest honor an Oklahoma High School football player can receive. These teams are selected by the coaches, and when selected to play in the game, they become all-states by class, who are the best of the best. Joining Sanders on the East All-State team for the game is Pioneers quarterback Gage Gundy. The 6-4, 215-pound Gundy is the son of Oklahoma State head coach Mike Gundy. Gundy follows his father, brother (cowboy quarterback Gunnar), grandfather (Ray) and uncle (Cale) as an All-State selection.

Gundy and Sanders teamed up to help Stillwater win the Class 6A-II State Championship over Choctaw in December. While Sanders is already enrolled at Oklahoma State, Gundy plays baseball for Stillwater and is a prospect in July’s Major League Baseball amateur draft. 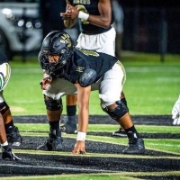 Broken Arrow offensive lineman Jamison Mejia makes the all-state game. The 6-5, 280-pound Mejia officially visited Virginia last weekend and will begin an official visit to the state of Oklahoma on Thursday, January 26. Mejia is probably an offensive tackle in college.

Joining Sanders and Mejia on the East’s OCA All-State team is CJ Compton from Bethel. Compton is a favorite walk-on for the Cowboys and will participate in walk-on day for Oklahoma State Football this weekend. He’s a 6-5, 295-pound lineman who has excellent opportunities to work toward a scholarship.

Earning All-State by Class Honors from the OCA are Del City defensive end Jaedon Foreman (6-4, 260). Foreman signed with Oklahoma State and will report this summer. Norman North recently signed wide receiver Cason Cabbiness (6-2, 175) as the preferred walk-on. He will join his older brother Cale Cabbiness on the Cowboys team. Garrett Keith (6-4, 285) is another preferred offensive player that Oklahoma State thinks is a strong prospect. Keith earned his All-State honors while playing at Ardmore Plainview.