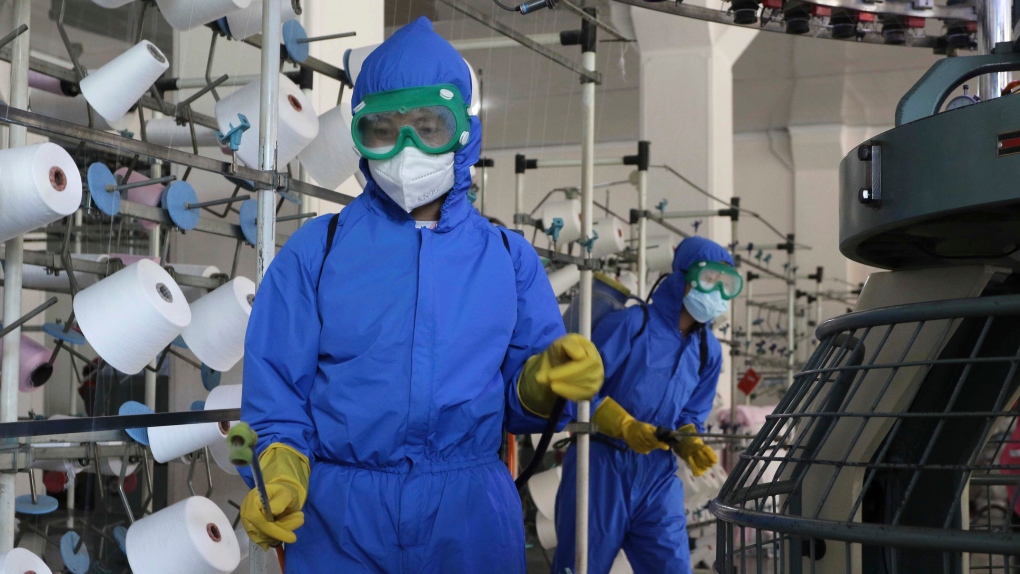 North Korea on Friday said nearly 10 percent of its 26 million people fell ill and 65 people died in its first COVID-19 outbreak, as outside experts question the validity of the reported deaths and worry about a possible humanitarian crisis.

After North Korea admitted the Omicron outbreak last week after claiming it was coronavirus-free for more than two years, North Korea said an unidentified fever had exploded across the country since late April. The anti-epidemic center has released fever statistics every morning through state media since then, but they don’t include COVID-19 figures.

Some observers say North Korea was likely forced to admit the COVID-19 outbreak because it could not hide the highly contagious spread of the virus among its people and suffered from possible public discontent with leader Kim Jong Un. They believe North Korean authorities are reporting too low deaths to show their pandemic response is effective, while the country lacks testing kits to confirm large numbers of virus cases.

“It is true that there has been a hole in the two-and-a-half years of fighting the pandemic,” said Kwak Gil Sup, head of the One Korea Center, a website specializing in North Korea affairs. “But there’s a saying that North Korea is ‘a theatrical state,’ and I think they’re massaging the COVID-19 statistics.”

Kwak said North Korea is likely to use the outbreak in part as a propaganda tool to show it is overcoming the pandemic with Kim’s leadership. But the country has “a plan B” and “a plan C” to seek Chinese and other foreign aid if the pandemic spirals out of control, he said.

On Friday, the North’s state-run Center for Emergency Prevention said 263,370 more people had febrile symptoms and two more people died, bringing the total number of fever cases to 2.24 million and the death toll to 65, according to the agency.

The outbreak likely stemmed from an April 25 military parade in Pyongyang that Kim organized to show off his new missiles and loyal troops. The parade and other related celebrations marking the founding anniversary of the North Korean army drew tens of thousands of people and soldiers from Pyongyang and other parts of the country, who were returning home after the events.

According to Ha Tae-keung, a lawmaker who attended a private NIS briefing, National Intelligence found that these diseases had already spread across North Korea even before COVID-19 broke out. Ha quoted the NIS as saying the waterborne diseases were spreading due to shortages of medicines and medical supplies in the wake of the North’s previous longstanding anti-pandemic moves.

“(The NIS) said it does not know exactly what percentage of fever cases are coronavirus patients. It said North Korea lacks coronavirus diagnostic kits but seems to have enough thermometers,” Ha said.

The NIS has a patchy record of confirming developments in North Korea. Some civilian medical experts previously said they believe most of the fever cases announced by North Korea are COVID-19.

Earlier this week, a health official on state television said the government had detected 168 COVID-19 cases by Monday, when the country’s fever cases had already surpassed one million. There have been no updates on virus cases in the North since then.

North Korea’s public medical system remains in shambles, and experts say the country could face mass deaths from pandemics if it doesn’t receive outside aid. They say the country’s heightened movement restrictions and quarantine rules could also exacerbate food insecurity.

The NIS said North Korea intends to overcome the pandemic with the help of its main ally China, according to Ha and Kim Byung-kee, another lawmaker briefed by the spy service. During an anti-virus meeting on Saturday, Kim said his country is facing “major upheaval” and officials need to study how China and other nations have been handling the pandemic.

Some media reports said North Korea had already sent planes to China to bring back emergency supplies earlier this week, but the South Korean government said it could not confirm the reports. South Korea said it and the United States have offered to ship vaccines, medicines and other medical supplies to North Korea, but the North has not responded.