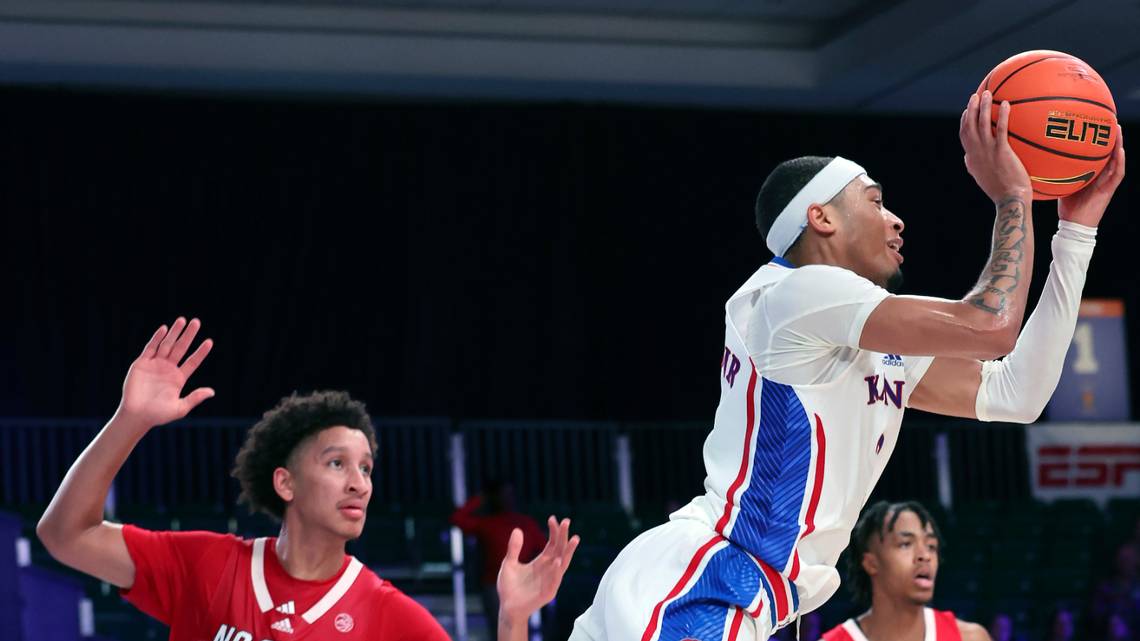 NC State took a big step up in the competition Wednesday, and that step proved a little too big for the wolf pack.

The pack struggled for 40 minutes and had some good moments against No. 3 Kansas in their opening game at Battle 4 Atlantis in the Bahamas before the Jayhawks secured an 80-74 win.

“What a game,” said NCSU coach Kevin Keatts. “It felt like an ACC match in late January or February. Give honor to Kansas. I thought they did plays on the track if they had to have it.

“I’m proud of our boys for how hard they played. Unfortunately we just missed the game but there is a lot to build on.”

The Wolfpack (4-1) face either Wisconsin or Dayton in their second game on Thursday before completing their three games on Friday at Paradise Island.

The pack struggled to slow down Gradey Dick, a lean 6-8 freshman with a sweet shot feel. Dick missed a few shots in the second half but finished with 25 points.

“I think his legs left him a little bit,” said Kansas coach Bill Self. “But he’s a great shot.”

The Jayhawks (5-0) tied the game as junior forward Jalen Wilson had 19 points and Dujuan Harris had 14 points. Wilson, who averaged 24.5 points in his first four games, also had 11 rebounds Wednesday.

Earning 21 points from Casey Morsell, 19 from Terquavion Smith and 17 from Jarkel Joiner, the Wolfpack kept attacking. After the pack settled for too many outside shots in the first half – not all good shots – Smith and Joiner wanted to hit more through the alley in the second half.

“I told our boys that this is the fastest team that we will play on the sidelines,” said Self, who was back on the bench after a suspension for the first four games. “Joiner is as legitimate a lead overseer as anywhere in the country and Smith is just as legitimate a scorer. (Morsel) is good. Their speed was what worried me the most.”

While the Jayhawks led 72-68, DJ Burns missed two free throws from the pack with 3:11 left. Dick scored on a reverse layup and after Burns missed another shot, Kansas followed with two Wilson free throws. It was an eight-point spread that decided the game.

It’s not the same Kansas team that won the NCAA championship last season by beating North Carolina in the title game, but it’s a team that can contend for another championship and beat Duke this season.

The pack won their first four games, two in blowouts and two in close finishes. But these were against Austin Peay, Campbell, Florida International and Elon. That was Kansas.

“We’re going to build on that,” Keatts said. “It’s difficult. Even if you play a good game, it’s your first loss. Every time you have your first loss, we have to deal with it and we have to shake it off and play another good team in 24 hours.

The Pack trailed 39-31 at halftime, but an offensive push from Morsell — two 3s and eight straight points — drew NC State to a 39-39 tie.

Keatts was called out for a technical foul after the Jayhawks’ Kevin McCullar tiptoed to the touchline to save the ball and passed to Ernest Udeh for a layup. Keatts protested—too much. Dick hit both technical free throws and the Jayhawks held a 53-47 lead with 13:33 in regular play, pushing it out to nine points.

“We stayed together as a team,” Smith said. “When we came back from those deficits, it was just about being together and lifting each other up.”

The game ended 63-63 with seven minutes left before a layup by Wilson gave the Jayhawks the lead.

The pack tried different players defensively against Dick in the first half and he had blocked a shot but found six times from behind the arc.

Smith, on the other hand, struggled in the first half. He missed five of his seven 3s, although he managed to score 10 points in the period.

In more than 30 years with The N&O, Chip Alexander has covered the beats of NC State, UNC, Duke and East Carolina and is now in his 11th season with the Carolina Hurricanes. A winner of numerous state and national author awards, Alexander covered the Hurricanes’ move to North Carolina in 1997 and was part of The N&O’s coverage of the Canes’ 2006 Stanley Cup run.