The Minnesota state legislature has increased clean energy goals for electric utilities with a bill that would ensure utility customers would get 100% of their energy exclusively from carbon-free resources 10 years earlier than many utilities originally planned. 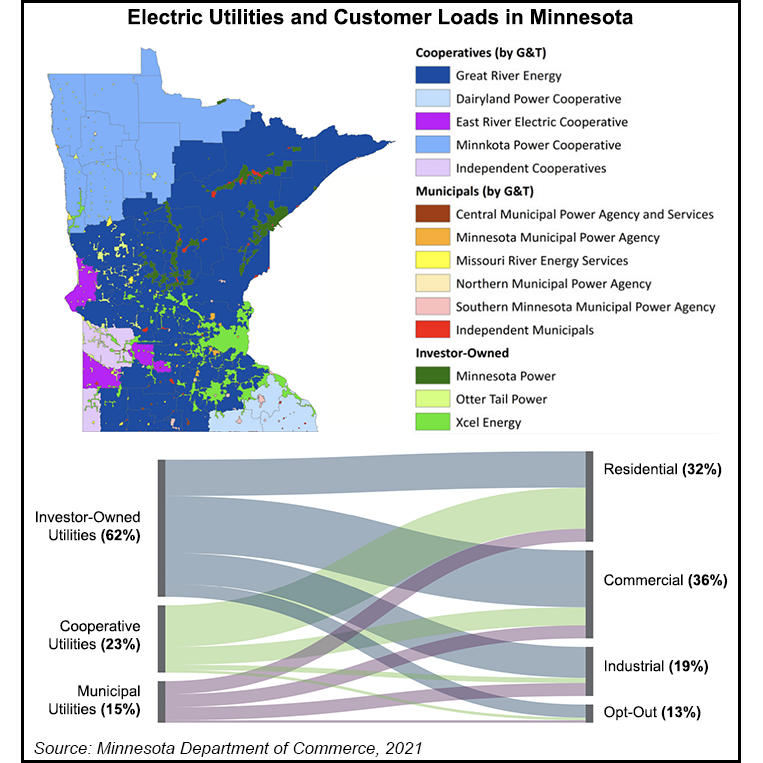 HF7 establishes a zero-carbon standard that requires all electric utilities, including electricity co-ops, to generate or source their energy for retail distribution only from eligible technologies, including solar, wind and hydroelectric power already in operation, green hydrogen and renewable natural gas from specific sources.

In April 2019, Gov. Tim Walz (DFL) initiated the One Minnesota Path to Clean Energy, under which the state aims to achieve 100% clean energy for the state’s power sector by 2050.

A series of legislative measures required electric utilities to reach 25% of retail sales from clean energy by 2025. In 2018, however, Minnesota met that benchmark and surpassed its 2020 goal of also reaching 20% ​​clean energy.

During the House Climate and Energy Finance and Policy Committee meeting last week, Jamie Long (DFL-61B), the House Majority Leader, with a wind turbine pin on his lapel, said: “The last eight years globally have been the hottest eight since Beginning of recordings…

“Climate change is affecting our farms through increased flooding, soil erosion and weather variability. It affects our cities through costly repairs and upgrades to our infrastructure. And it’s affecting our state traditions, from snowmobiling to trout fishing.

“And the pollution from fossil fuels that causes climate change also harms us,” Long said.

Because the state has no proven reserves, “every year we send $13 billion overseas to buy energy. That’s 4% of our state GDP that could create jobs here in Minnesota. We should spend this to build wind and solar instead, and make the 140 tons of steel in each wind turbine with Minnesota taconite.”

Minnesota, which has no proven natural gas or crude oil reserves beneath its surface, relies on a mix of coal, imported fossil fuels, nuclear power, hydroelectric power, and other renewable resources for the state’s electricity needs.

Renewable resources, on the other hand, accounted for 32.8% of Minnesota’s net utility-scale electricity generation, according to EIA data, just over 12% above the U.S. average of 20.7%.

According to Long, while Minnesota is at the forefront of the energy transition with “the first industrial-scale wind farm between California and Denmark,” the state has fallen behind and may not meet its goal of reducing carbon dioxide (CO2) emissions by up to 80% 2050

Minnesota’s three largest utilities, including Xcel Energy Inc.’s Minnesota branch, “are all committed to 100% clean energy,” meaning that “over 80% of Minnesota’s electric customers already have a utility that is already committed.” for rapid decarbonization. “ Long noted.

According to Long, Xcel has reportedly saved $200 million for customers after “installing renewable energy instead of gas.”

“Utilities have said that while climate is important to their customers in making these decisions, the real driver is cost,” Long said.

The rep cited data claiming that the cost of wind and solar has fallen so sharply over the past decade that wind is now “the cheapest form of electricity, period” and the two generation methods lack “vulnerability to fuel price fluctuations.” like us”. I’ve been looking at gas prices lately,” Long said.

Minnesota’s Citizens Utility Board (CUB) said in a letter to lawmakers signed by Executive Director Annie Levenson-Falk last week that while CUB supports the bill, it is “very concerned about the rise in energy costs in recent years.” of years – especially the fuel costs…”

CUB, a nonprofit organization dedicated to representing the interests of Minnesota’s utility customers, said that “renewable energy tends to be the least expensive power option,” but noted that “the grid needs different types of flexibility to operate on high levels of intermittent wind and solar power…”

The nonprofit said it was “confident” that electric utilities could achieve 90% renewable electricity “without risking reliability or increasing costs, … but that last 10% requires some trust.”

Therefore, CUB requested that HF7 Minn. Stat. Section 216B.1691, subsection 2b, which provides for an offramp for utilities when renewable energy “becomes too expensive or would affect reliability to meet milestones,” Levenson-Falk wrote.

According to the Climate and Energy Finance and Policy Committee on Wednesday, HF7 included a provision that would allow electric utilities to defer or change the clean energy target. The utility would have to undergo a regulatory review that would consider several factors, including whether the utility has “taken reasonable steps to maximize low-cost power delivery from appropriate power technologies prior to the availability of transmission,” the bill now says .

As changes were made to the legislation, Long also noted that the committee decided to add a section that would allow Minnesota’s Public Utilities Commission (PUC) to direct utility-owned coal-fired generating units to reduce carbon emissions .

If the bill and regulation are passed, the PUC may require public utilities to implement a plan to operate only coal-fired units June through August and December through February, or unless it is an emergency response. The PUC may also be permitted to set a cap on CO2 emissions from coal-fired power generation units.

Government Affairs Representative Brita Endrud, speaking on behalf of the Minnkota Power Cooperative, a non-profit power generation and transmission (G&T) company operating in northwest Minnesota, said that the cooperative had “many serious concerns about this bill…” .

The main concern was the ability of the coops to maintain reliability and affordable resources with a faster schedule.

“Minnkota recognizes the need to decarbonize the electric sector, but this must be approached with extreme care and thought,” Endrud said, noting that rural areas “have unique needs” that have allowed co-ops to “become self-governing in the “Moving their communities forward” while working with policymakers.

Co-operative utilities supply about 23% of Minnesota’s electricity needs, compared to investor-owned utilities, which supply about 62%. According to a 2021 report by the state Department of Commerce, municipal utilities provide the remaining 15% of electricity.

During the Energy and Policy Committee meeting, Minnkota also advocated for the state to “consider all technologies” that can help reduce emissions.

Minnkota operates two coal-fired units at its Milton R. Young power plant, providing a total of 705 MW of electricity to its customers. In addition to its “aggressive wind portfolio…Minnkota is also pursuing and executing one of the most ambitious carbon capture projects in the world, Project Tundra,” Endrud said.

Project Tundra, for which a final decision on whether to proceed with construction is expected by the end of 2023, would capture more than four million tons of CO2 per year from the coal-fired power plant.

“That’s the equivalent of taking 800,000 fossil fuel vehicles off the road,” noted Endrud. According to Minnkota’s 2021 annual report, the generation facility would reduce carbon emissions by 90%.

Stay in this Bigfoot style cabin in Oklahoma