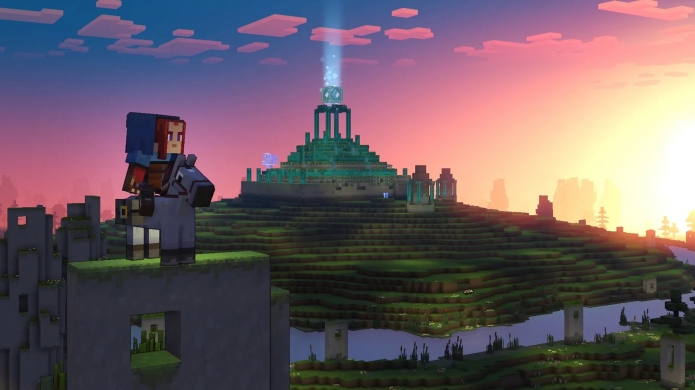 As part of today’s Xbox and Bethesda Developer_Direct, we got a good look at the PvP that includes the aforementioned and very cool procedurally generated maps, PvE exploration, resource battles, base building and combat. It’s a mix of styles presented in a really cool way, making full use of the Minecraft universe.


Within the story-driven campaign, players can explore a world filled with treasure and danger, reunite with familiar mobs, meet new mysterious characters, and strategize with allies in epic battles against the Piglins. Minecraft Legends will also introduce a PvP mode, where two teams of up to four players each work together to gather resources, build a base, and besiege the opposing team’s forces.

“It’s not like your traditional multiplayer situation where you have a few cards. Every time you play PvP, the strategy you use to win could be different than the game before,” said Dennis Ries, Executive Producer of Minecraft Legends. “Once we added that procedurally generated dynamic with the variety, it really started to feel like Minecraft. The chaotic fun really shone through and we wanted to embrace that chaos.”

“Each game is a new scene and there are different environmental challenges,” explains Lee Pederson, producer of Blackbird Interactive. “So when you build your base, you can, for example, take advantage of being on a mountaintop or build a tower behind you to hide it. You really need to align your strategy with what the world is generating for you.”

And with that, Minecraft resources like Redstone, Diamond, and Iron offer various units and upgrades to build – which definitely sounds a lot like a third-person action RTS. And for that reason alone, we’re keen to jump in – and play it like a native version of StarCraft or Warcraft. With additional creepers, skeletons, zombies and piglins. And the ability to build huge traps and towers.

You can watch the full Minecraft Legends presentation on Xbox and Bethesda Developer_Direct below – starting at around the 2 minute mark.