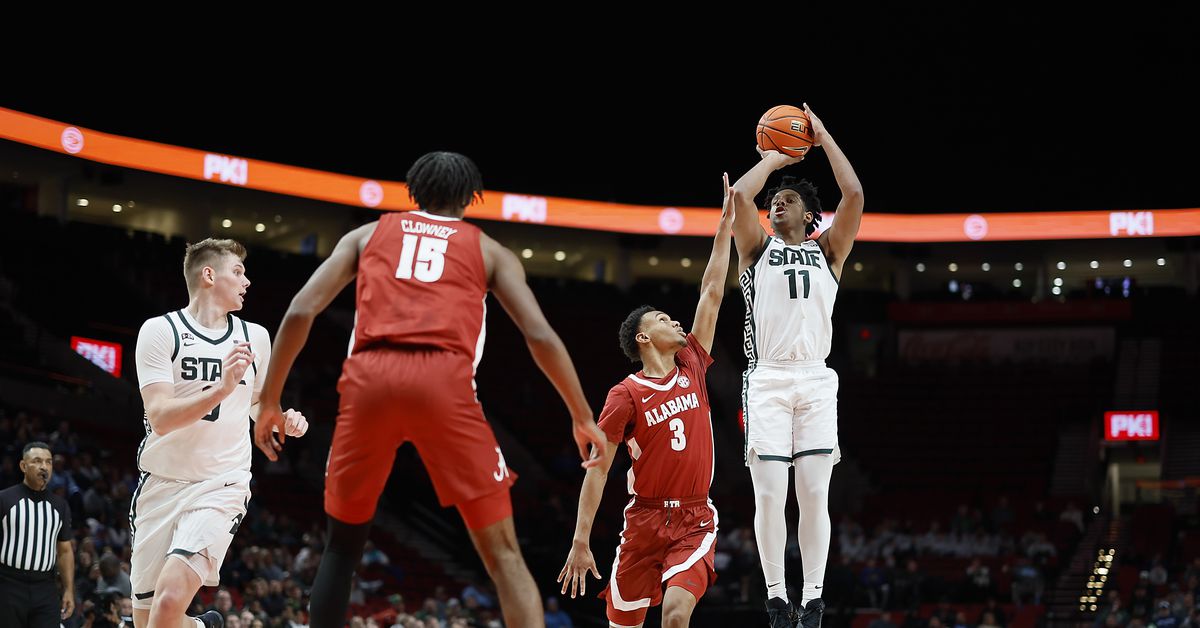 The Michigan State men’s basketball team took on Alabama late on Thanksgiving night to compete in the opening round of the Phil Knight Invitational (PK85) in Portland, Oregon. The Spartans lost with a final score of 81-70.

Michigan State was shorthanded in this contest as forward Malik Hall and guard Jaden Akins both missed the game with related foot injuries. The lack of bodies took a significant toll on MSU as the game progressed.

Offensively, it was a slow start for the Spartans before things got better. Center Mady Sissoko scored the goal in the game after hitting two free throws to give Michigan State a 2-0 lead. MSU, however, missed their first six field goal attempts before eventually making a basket put up by guard Tyson Walker for the score, 8-4 in Alabama’s favour.

The teams would then trade baskets for the remainder of the first half. At the media timeout of less than 12 minutes, Alabama held a narrow 15-14 lead after a drive serve from guard Jahvon Quinerly.

Michigan State went 23-19 with a less than eight-minute timeout in the first half. The Spartans’ 9-4 run included a three from Walker.

In the first half, things went back and forth quickly. In fact, the under-four-minute media timeout didn’t even happen until just 1:56 remained before halftime. The Spartans were leading by a slender margin at this point, leading 34-33 after a jump shot by guard AJ Hoggard.

Later, as time was running out in the first half, Alabama freshman Brandon Miller drilled a deep buzzer-beater — much to the dismay of Michigan State head coach Tom Izzo — to take the Crimson Tide 42-37 at halftime to bring against the Spartans.

Walker led Michigan State by 11 points at halftime while Miller led Alabama by 17 points after the first 20 minutes.

While the first half was hard fought throughout, the second half was different.

Walker got the goal going in the second frame with a pull-up jumper, but it was immediately answered with a three by Alabama guard Nimari Burnett. Michigan State guard/forward Pierre Brooks then added a second chance layup after hitting an offensive rebound. The Crimson Tide led 45-41 with 18:14 remaining.

After that it was Alabama. Miller scored five straight points for the Crimson Tide, including a three-pointer. Free throws from Hoggard and Michigan State forward Joey Hauser reduced Alabama’s lead to five points at 50-45.

Alabama then went on a strong 17-4 run to extend their lead. Another three-pointer from Burnett put the Crimson Tide in play 67-49 at 9:17. Single-handedly attempting to bring the Spartans back from there, Walker scored seven straight points to reduce Alabama’s lead to 67-56 with 7:20 remaining on the clock.

However, the Spartans’ momentum was halted on the next possession of the Crimson Tide. Michigan State freshman guard Tre Holloman was called for a foul when Alabama guard Mark Sears attempted a three-point shot. Sears hit all three free throws to lead Alabama by 14 points to 70-56.

Brooks would then drill a three-pointer to cut Alabama’s lead, but the Crimson Tide answered at the other end after a layup from forward Noah Gurley. At this point, Alabama led 72-59 with 5:37 remaining.

Hauser shared two free throws and Hoggard hit a three after an offensive rebound to draw the Spartans within nine points with 1:48 points remaining.

Gurley then hit two free throws for Alabama while Hoggard immediately responded with another make from beyond the arc. The Crimson Tide led the Spartans 78-70 with 1:41 on the game clock.

However, it was too little, too late for Michigan State. Gurley added two more free throws while newcomer forward Noah Clowney added an extra free throw. Alabama defeated MSU with the final score of 81-70.

Walker led Michigan State with 21 points and four assists while Hoggard had a career-high 18 points. Those were the only two double-digit scorers for MSU. Brooks led the Spartans with nine rebounds.

Michigan State falls to 3-2 in the young season while Alabama moves to 5-0. Michigan State plays Oregon in the consolation round Friday night. It will be a very late notice at midnight Eastern Time/9pm Pacific Time.