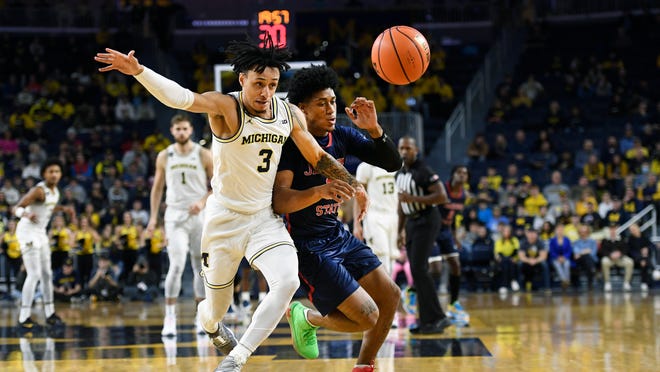 ann arbor – The Wolverines got a chance to enjoy a cupcake on Thanksgiving Eve and head into the holidays high.

Although they have taken their time breaking away from an overwhelmed opponent, they are still grateful for one thing – the result.

Michigan had some shaky stretches early and late but relied on a balanced effort to get the job done against Jackson State in a 78-68 win Wednesday at the Crisler Center.

“(We) keep working on defense and playing hard and communication is a big focus,” said graduate transfer guard Jaelin Llewellyn, who made six free throws in the last 27 seconds to hold off a late Tigers push.

“We try to focus on that in training but a win is a win. We can learn a lot from wins and losses, so let’s take it one step at a time.”

Freshman wing Jett Howard finished with 19 points, junior forward Terrance Williams II added 11 and second guard Kobe Bufkin had 10 for Michigan (5-1), who got off to a rocky start but were 42.4% off the field was (25-for -59) with 12 made 3-pointers.

After a strong first-half finish, Michigan reinforced defense, using a 3-pointer from Williams and a driving layup from Howard to extend the lead to 47-32 with a 15-55 lead.

Jackson State threatened to narrow the deficit into single digits, but Michigan managed to keep them in check as the deep balls rolled in. As they drew within 11, Howard splashed a 3-pointer. As they reduced it to 12, graduated transfer wing Joey Baker drilled a 3-pointer off the wing.

Michigan took its biggest lead, 64-43, when Howard capped a 13-4 tide with a driving layup at the 8:49 mark, but Jackson State refused to go down without a fight. The Tigers clawed back with eight points unanswered to cut the deficit to 13 before Bufkin stemmed the tide with a 3-pointer, making it a 16-point game 5-18 to play.

Jackson State had one final push, traveling together on a 13-2 run to cut it to 74-68 with 22 seconds remaining. But that’s as close as the Tigers would come, as Llewellyn made enough free throws to seal it despite the Wolverines’ sloppy finish.

Junior center Hunter Dickinson finished the tournament with nine points, 12 rebounds and four blocked shots. He briefly went back to the dressing room in the first half and had his thigh/hip area checked by a coach on the touchline, but returned to action and logged 28 minutes.

“We’re not where we want to be defensively,” Howard said. “Offensively, I know these guys are great shooters. It won’t fall every night. They also don’t want to take our confidence and shoot, so you’ll still take the open shot.

“At the end of the day, we’re just trying to get into the rhythm on offense and on defense. Hopefully we’ll be better by January.”

Both teams could not move much offensively early on. Jackson State missed seven of its first 10 shots. Firing from deep, Michigan clinched 10 of his first 12 tries, many coming from within 3-point range.

After Jackson State continued to linger and was the first to score 10 points on a basket in the paint at 12:27 in the first half, Michigan got a boost from the second unit led by freshman guard Dug McDaniel. He gave the Wolverines their first lead when he found junior forward Jace Howard with a 3-pointer to make it 18-17 at the 8:37 mark.

Checking back in at 6:48 a.m., Dickinson and the rest of the starters shook off the sluggish start and closed out the halftime with a 17-5 run. Howard capped the spurt with a step back 3 pointer in the closing seconds to give Michigan a 37-27 advantage at the break.

The Wolverines maintained that double-digit lead to the last minute and were able to take care of business next week with two high-profile matchups against Virginia and Kentucky.

“The ball didn’t go in for the first five minutes, but we still played hard,” said Michigan coach Juwan Howard. “In the last five minutes they took a few shots and there were a few turnovers from us that were out of character.

“It’s early in the season. I’m sure a lot of teams like us aren’t playing their best basketball. We’re getting better and better game by game.”