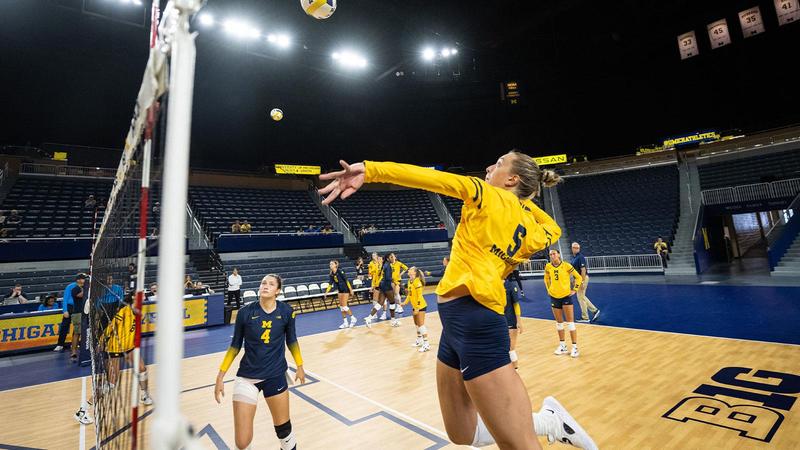 » Michigan was led by Jess Mruziks 17 kills and 10 digs, her ninth double-double of the season.
» Michigan had three players with double-digit kills in Murzik (17), Pertofsky (14) and Robinson (10).
» The Wolverines blocked Iowa 13-9.

Michigan (16-13, 7-12 Big Ten) was led by Jess Mruzik She racked up her ninth double-double of the season with 17 kills and 10 digs. Defensive, Hannah Grant recorded 24 excavations and jess robinson had six blocks.

Hot out of goal behind Mruzik, Michigan took a 6-1 lead in the opening set before the Hawkeyes called their first timeout. The Wolverine continued in command when Grant stepped to the service line, earning an ace and assisting in a kill Serena Nyambio and Robinson ahead of Iowa (9-21, 3-16 Big Ten) called his final timeout of the set at 15-6. UM never took their foot off the gas, winning 10 of the last 13 points, the last coming from a May Pertofsky quick in the middle to take the set 25-9.

The Wolverines jumped out to another quick lead behind a Robinson kill and a Robinson and Pertofsky block, but the Hawkeyes tied by 3. The Wolverines went on a 5-1 run before Iowa called out for eight points after three blocks in the first timeout, 8-4. Michigan kept rolling and took a 21-13 lead before Iowa called for a nyambio and his final timeout of the set Jacques Boney Block. The Hawkeyes tried to string together a few runs, but the Wolverines won the second set 25-19, with the final point coming from a Robinson slam down the middle.

The third set was back and forth until the Hawkeyes started a 4-0 run and closed in a block to take a 10-6 lead. Michigan tried to piece together some runs, but the Hawkeyes were too hot to make a run of their own to take a 19-12 lead before Michigan called a timeout. UM failed to make a comeback and fell 25-18 in the third set.

The fourth set began with trade runs from both teams. The Wolverines then went on a 4-0 run to force Iowa to call its first timeout at 12-9. The Wolverines kept the runs going and took a 20-14 lead. However, the Hawkeyes recorded a block to ignite a rally that dragged them to three points, 22-19, before a timeout in Michigan. The Hawkeyes went on a 10-2 run to win the fourth set 26-24.

In the fifth set, Iowa jumped out to an early four-point lead and was first to hit the eight-point mark and the teams switched chutes. Haley Hallgren broke the Hawkeyes’ run with a slam down a line and an ace Amber beads drew Michigan within one at 8-7. Iowa then called a timeout and when play resumed, the Hawkeyes went on a small run to go 12-9 ahead to force Michigan’s final timeout of the set. A kill from Mruzik and a block from Robinson and Pertofsky caused Iowa to call a timeout and hold on to a 13-11 advantage. After the timeout, an Iowa error and a Hallgren block pulled UM back to 13, but the Hawkeyes clinched the last two points to win the set 15-13 and the match 3-2.

Michigan will wrap up the regular season roster at 7 p.m. Friday (November 25) when it hosts Rutgers at Senior Night at Cliff Keen Arena. The game will be streamed live on B1G+.