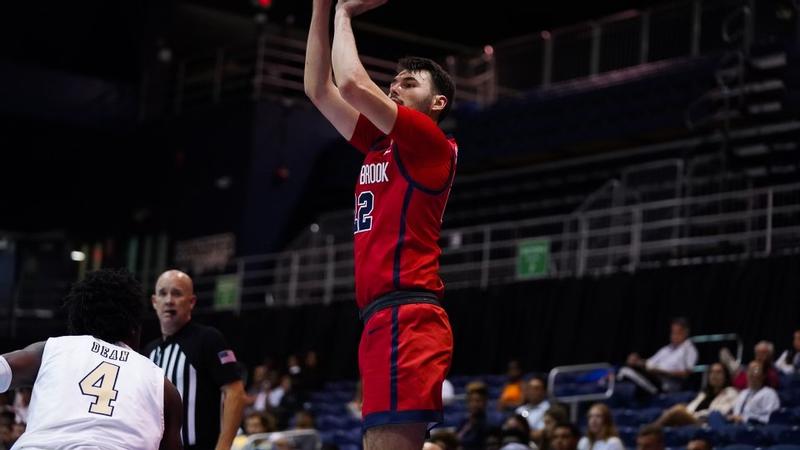 MIAMI, Fla. – The Stony Brook men’s basketball team (1-4, 0-0 CAA) was led by a trio of student-athletes who scored in double figures, but it ultimately wasn’t enough as the Seawolves lost 83-50 to Florida International Wednesday night at the Ocean Bank Convocation Center.

Junior forward Kenan Sarvan led the scoring for Stony Brook, scoring 15 points in 4-of-10 shooting from the field and adding four three-pointers for team strength. The native of the Netherlands also pulled down five defensive boards.

Sarvan has a team high of 15 points.

Freshman Guard Toby Onyekonwu and graduate center Keenan Fitzmorris followed behind Sarvan who finished the night with 13 and 12 points respectively. Onyekonwu’s three made three-pointers is a new career high for the freshman and included his first college mat from beyond the arc.

😮 Keenan Fitzmorris with the 𝙎𝙇𝘼𝙈.

👀 TSM with the find.

graduate forward Frankie Policelli was a force to be reckoned with on the boards as the New York native posted a career-high and 11 rebounds as a team-high.

QUOTES OF THE SEA WOLVES

“Tough game tonight. They pressed and pushed the pace. I was worried about our ability to pass the ball against heavy pressure and it was as bad as it could be tonight. We need to improve and up the attack just get through it. It’s going to be a really tough month for us if we continue to have 20 turnovers and double-digit turnovers from the perimeter. I think we’ll make some progress and improve,” said the head coach Geno Ford.

Stony Brook is back on court for the FIU MTE final against Eastern Washington at 6:00 p.m. on Friday, November 25. It is the first meeting in the history of the program between the teams.