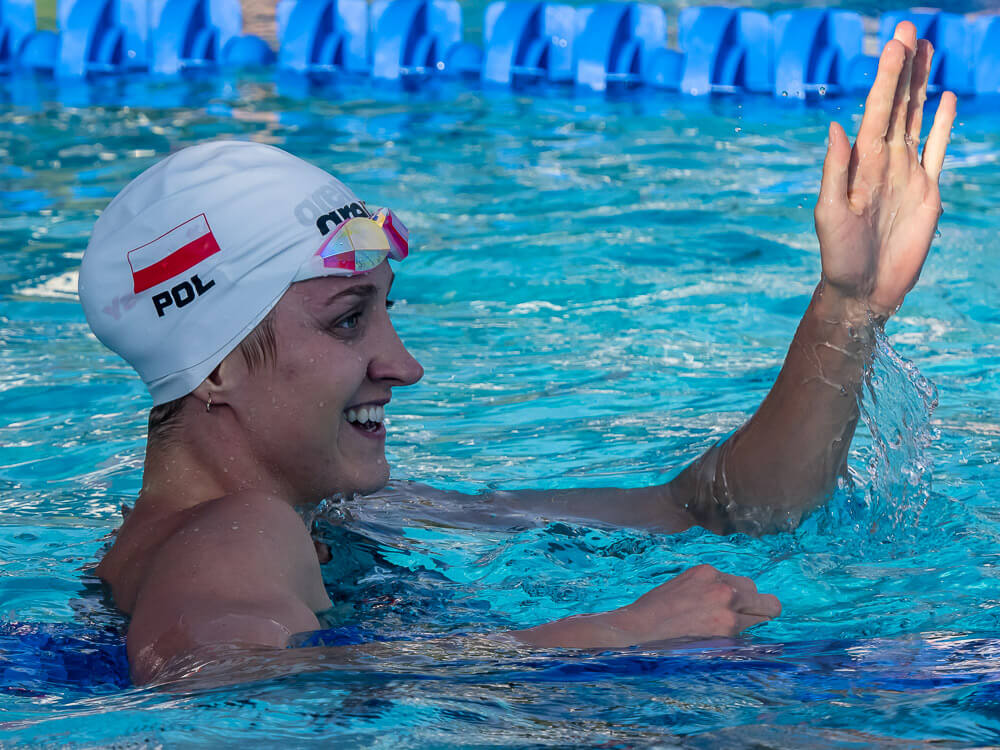 From retirement to global success: Kasia Wasick has found a late career boost

Believe in yourself. That’s the lesson Polish swimmer Kasia Wasick learned after retiring from swimming six years ago with a shoulder injury and then returning with newfound confidence and appreciation for the sport she loves.

six years ago Katarzyna (Kasia) Wasick, née Wilk, had finished swimming. After participating in her third Olympic Games (2008, 2012, 2016), a shoulder injury forced her to retire.

As it turned out, she was just getting started.

Wasick launched the second wave of her career, which turned out to be even more successful than the first. She qualified for her fourth Olympic team, competing in Tokyo in 2021, and finished fifth in the 50-meter free skate – her best Olympic performance.

This year she continued that momentum, winning the silver medal in the 50 freestyle at the FINA World Championships in Budapest. Touching the wall in 24.18 behind Sweden Sarah Sjostrom (23.98), Wasick became only the second Polish woman in history to win a medal at a World Endurance Championship Otylia Jedrzejczakwho won seven medals (two gold, three silver, two bronze) on March 7th, 2001.

And what made it even more special for Kasia was the fact that she did it in front of her whole family!

“It’s been a journey,” admitted the 30-year-old. “This year has really given me a lot of energy to keep going. I have days when I want to drop everything and say, this is it. But then I think of times like this year, when I got a medal at the world championships there with my whole family.

“It wasn’t my best time, nor was it about prize money … it was just about my family,” Wasick said. “It’s not often that someone (at my age) wins a medal at the World Championships. I basically climbed the mountain every day to get there.

“It was a beautiful moment. I didn’t expect then that I would have so many emotions. For all the years of my career, before my retirement, I believed that it would be impossible for me to win a medal at (LC) Worlds. I felt that I wasn’t as talented as others and here – having retired from swimming – I am capable of winning a medal.

“Finally I did it and I was just relieved and proud. I knew it was more than just a medal – it showed people that you can do it if you believe in yourself. At 30 you can be a great athlete. All my family was there and they knew all my journey. My parents hadn’t seen me race for 12 years. I saw their faces and thought about the times my parents used to take me to the pool when I was growing up.”

It was the culmination of two spectacular years for Wasick.

As Wasick said, it’s been a journey — one that began before the 2008 Olympics and saw a fresh start after 2016, when a shoulder injury forced her to retire. But she just couldn’t stay away.

“I was in LA at USC at the time,” she said. “I was ready to swim professionally, but after a few weeks I injured my shoulder. I was forced to take time off, then got engaged and moved to Las Vegas. Immediately after moving I got a job in clinical research.

“My life suddenly changed 360 degrees and I stopped swimming. There weren’t a lot of options in Vegas at the time, so I didn’t think about it (back to the sport),” she said.

“However, after a year and a half it became very difficult mentally to come to terms with swimming and to realize that I would never compete in the Olympics again. On the way from athlete to stopping, your body misses the work so much. I tried to run – and I would try to stay active – but it wasn’t at that level.

But the feeling that her career wasn’t going to end on her own terms continued to creep into Wasick’s mind.

“I think because it wasn’t my decision to stop (it was because of the injury) I was working in the office a year later and suddenly I realized I would never be a swimmer again. That was really hard for me to swallow. When I watched Polish national teams or international matches where my teammates swam, I felt the hunger,” she said.

“One day I came home and I was very sad. My husband asked me what was going on and I told him. He encouraged me to sign up for fitness classes. I started getting my routine back. That’s when one of my friends texted me and told me about the Masters team in Las Vegas. I signed up.

“It wasn’t like I was going back to swimming, so I didn’t tell anyone.” But it was the beginning of a great comeback story.

“At the meetup I met my current coach and I swam really well and had so much fun and so much energy. Ben Loorz told me afterwards that they were going to start a pro team. I trained with Masters for two months to be ready to join the University of Nevada Las Vegas pro team.

“From that moment I was really grateful for the chance to swim again and have another opportunity,” she said.

Part of what helped Kasia’s sprinting career was the formation of the International Swimming League (ISL). She appeared for three different teams in all three years of the league: the Cali Condors in 2019, the New York Breakers in 2020, and she was drafted by the Toronto Titans in 2021. She said the professional experience with the ISL was invaluable.

“The ISL was huge,” Wasick said. “I feel like if I wasn’t part of ISL I wouldn’t be the same swimmer. It gave me a lot of confidence and opened my eyes to other swimmers and the swimming world.

“Jason Lezak called after (the 2019 World Championships) and offered me a place on the team. ISL gave me the chance to race more. I used to go to big meetings and choke. I didn’t know how to race. I’ve met so many amazing swimmers,” Wasick said.

“Before ISL I didn’t think I could swim at this level. I believed US stars and other world-class swimmers were like superheroes. But swimming with them really opened my eyes and showed me that I can do the same.

“I was shy and not comfortable in my own body, but my teammates gave me the confidence. I became a different swimmer. You realize that the stars are people too.”

It helped her realize that she now belongs to this elite group. While she may not have been as confident in the first half of her career, Wasick’s accomplishments were nonetheless significant.

She competed for Poland at the 2008 and 2012 Olympics, then swam at USC, where she was a 12-time All-American for the Trojans, including being part of the 2016 NCAA champion 400 free relay. Then Wasick headed to Rio in 2016 to compete in her third — and, according to her, last — Olympics. Now she is training for a possible fifth Olympiad.

“When I first got back to swimming, my goal was to be a fourth Olympic team. But after a few months, I started to think back to the pre-retirement days. I was just swimming so much faster that I had to change my goals every few months. I had to put something higher on the table. It didn’t happen overnight.

“I’ve improved at every meeting,” she said. “My next big goal is the Olympic Games in Paris. I don’t see it as my ultimate goal. I try to focus on something after the Olympics. I don’t like putting so much pressure on a meeting.

“I try to have fun when I race and be grateful. Swimming performances are amazing, but they are not everything.”

Wasick trains in Las Vegas, where she moved with her husband Matthew.

“I love training in Las Vegas. I have a great relationship with my coaches. They treat me like a pro and really listen to me. They trust me and know that I want to get better.

“Swimming is my job, so I have to be a pro. I’m committed to it and I can’t treat it like a hobby. I quit my other job to focus on swimming. It’s a great city. My husband and I go hiking all the time. The pool is near. Everything is comfortable,” she said.

GRATEFUL FOR YOUR SECOND CHANCE

Being away from her family in Poland for so many years was difficult, especially during the COVID-19 pandemic. But Wasick has been able to spend more time there lately.

“I now go to Poland more often, which makes me very happy. Every time I have the opportunity to spend more time with them, I go. My brother was my coach in Poland and it was great to see different coaches’ views. We have maintained this relationship over the years. I try to stop there after international meetings,” she said. “It’s an energy boost for me.”

It’s a boost that keeps her going as one of the world’s elite after a spectacular comeback at the age of 30.

“People wonder how I came back and left so quickly. I truly believe God gave me another chance to swim,” Wasick said. “This enthusiasm and appreciation for the sport gave me a lot of energy and a different approach. I’m grateful for every workout, every meeting – for every hour in the pool.”

New! 30-day membership with ISHOF AND Digital Swimming World Subscription for only $10 per month!