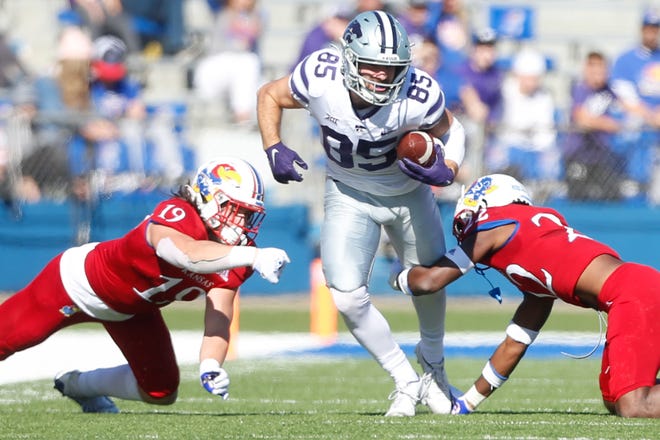 MANHATTAN — Normally, a seniors’ night rivalry game would serve as a triple threat distraction on a holiday weekend.

But for the Kansas State Wildcats, who are playing for much more than state bragging rights, that could be a good thing.

Rather than ponder the impact of Big 12 championship games — a win gets their ticket to Arlington, Texas next week — the Wildcats have more immediate concerns when they face Kansas in the Sunflower Showdown at Bill Snyder Family Stadium on Saturday at 7 p.m.

“It’s interesting because we talked about it extensively on Monday. It’s not a normal week for a variety of reasons,” K-State coach Chris Klieman said Tuesday. “There are so many distractions that could arise if you are not focused on the task at hand, which is your daily preparation.”

The Wildcats, 8-3 overall and 6-2 in the Big 12, have dominated the rivalry for nearly 30 years and their current 13-game winning streak is the longest on the streak by either side. But they face a KU team (6-5, 3-5) under sophomore coach Lance Leipold, who have qualified for the Bowl for the first time since 2008.

For this reason and others, the Jayhawks have K-State’s full attention. There is no time to look at a possible conference championship.

“Everyone knows what’s at stake, but our full focus at the moment is KU. It’s going to be a huge game and a challenge and we know it.”

Either a K-State win or a Texas loss to Baylor on Saturday puts the Wildcats in the Big 12 championship game against undefeated TCU December 3 at AT&T Stadium in Arlington, Texas.

That’s why wide receiver Kade Warner likes the timing of the KU game.

“I’ve told coach Klieman I love that we get to play KU in this game because obviously there’s a number of things to look forward to, looking forward to down the road and along the way, up where we are, can look further.

“But KU as the last game, that last home game, senior game and having so much emotion in that game is impossible for the lads to miss. It’s KU week and that’s all we’re worried about.”

Regardless of what’s at stake, Klieman likes the fact that the Sunflower Showdown takes place towards the end of the season. This is the last meeting of the teams since 2016.

“I think the most important thing for me since I’ve been here that we see it a little differently is that it’s the last game of the season and I think that’s probably a good thing,” said Klieman, who will be fourth game ends season as head coach of the Wildcats. “I don’t know where that’s going or how that’s going to be determined, but the fact that rivalry games should be played later in the season, whether it’s week 11 or week 12, I think is great for both teams.

“Whatever the record, I think there’s a lot at stake when you end up having your rivalry game, so that makes this one really unique.”

So much for worrying about the league championship game.

“That’s one of the things that we don’t really think about because we understand we can’t overlook this game,” said Wildcat running back Deuce Vaughn. “And since it’s a seniors’ night and it’s a rivalry game, since it’s Kansas and it’s home, all of those things are being boiled into the pot where we’re focusing on what’s going into that game.

“We can’t look ahead and we can’t look back either. We have to be where our feet are before this game today and tomorrow.”

Arne Green lives in Salina and covers Kansas State University esports for the Gannett network. He can be reached at [email protected] or on Twitter at @arnegreen.