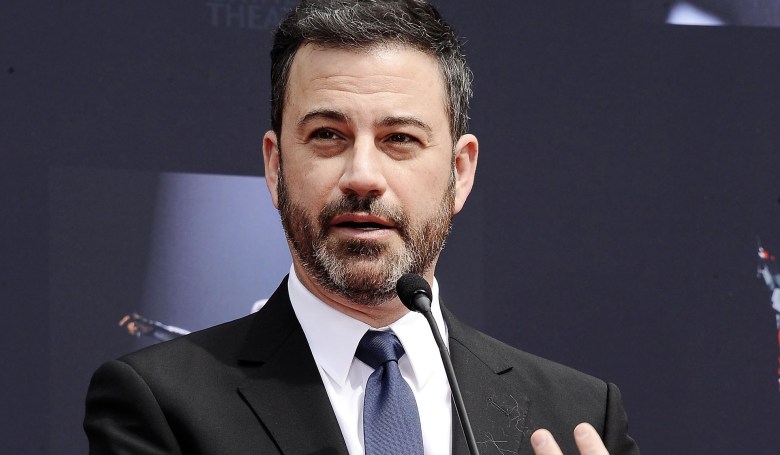 Kimmel appeared at the event for advertisers in New York City via Zoom after re-signing Covid.

The late-night host, who appeared via Zoom at Disney’s Upfront event in New York City on May 17 for re-signing Covid just eight days after previously testing positive, was feverish with jokes.

Introduced as the “late night king” by Rita Ferrero, Disney’s president of advertising sales and partnerships, Kimmel quipped, “I don’t know which multiverse I’m the late night king in, but I appreciate it. And let’s give another round of applause to Rita, the Queen of Bullshit.”

Disney’s Upfront 2022 took place on Manhattan’s Lower East Side in sprawling (but hard-to-reach) Basketball City. The presentation to advertisers was opened by embattled CEO Bob Chapek and closed by Kimmel. Between the two, stars like Dwayne “The Rock” Johnson, Peyton and Eli Manning, Kerry Washington, Claire Danes, Samuel L. Jackson, and many others entertained the media-buying community and showcased Disney/ABC/Hulus new slates of programming. Marvel boss Kevin Feige showed off some of his new stuff, including the trailer for She-Hulk: Attorney at Law.

Kimmel was arguably the most entertaining part of it — as he has been for many, many editions of Disney’s Upfronts over the years: “This is, I think, maybe my 19th Upfront. I don’t know, I stopped counting around Cougar Town.”

Despite calling Disney’s Hulu “the Stephen Baldwin of streaming platforms,” ​​Kimmel saved his deepest barb for Netflix regarding their recent share price downgrade. “Every year I say ‘f*ck Netflix,’ and this year it came true,” he said.

Read on for the rest of Kimmel’s best jokes from the event.

– “What happened to those assholes at Fox yesterday? After two years of telling everyone that COVID is a hoax, they make you take an Uber to watch a tape. Can you do this? And most importantly, why didn’t we? There is no good reason for you to be in this room, but there you are.”

—“When I first started, ‘Lost’ was one of our biggest hits. Now it’s our company motto here at ABC-ESPN+-Disney+-FX-FXX-NatGeo-FreeForm-HuluLemon – we’re one big happy family. And if someone asks in Florida, a heterosexual family: one mother, one father, not a single uncle living in a guest house.”

—“A Disney CEO has never spoken at Upfront before, and now we know why. Bob, I think I speak for all of us when I say we can’t wait to see you in GI Jane 2.”

– “Disney has been so committed to being inclusive and culturally sensitive since everyone started getting mad at us for not doing it. But what do you expect? We are 100. This company is 100 years old. It’s our 100th anniversary and we’re going to celebrate this milestone as only Disney can by milking the living shit out of it.”

– “ABC, you know, we ended the year in last place, both in total viewers and demo. And yet, somehow, we’re the number one entertainment channel for the third year in a row. How is that possible? I’ll let you in on a secret: It’s not – it’s what they call a false positive.

-“Now [Netflix is] come for our money, our advertising money, which is technically your money, but you know what I mean. It sucks, although I have to admit, after years of choking the life out of us from these smug bastards, it feels really good to see them deign to sell ads. I’ll call you bastards, take you for drinks, kiss you in the ass. Oh, everyone loves Bridgerton, right? How much do you think they’re going to love it when it’s interrupted by a Nurtec commercial every four minutes, you billion dollar cocks.”

– “A lot of people ask how we keep The Bachelor franchise fresh and the answer is very simple – we don’t. We will continue until everyone has herpes.”

—“After 30 seasons on ABC, the venerable “Dancing With the Stars” has been moved to Disney+. That’s right, we’re moving the show almost exclusively watched by seniors to a platform watched almost exclusively by kids and adult virgins.”

—“Let’s face it, our days are numbered. Of course the streamers crush us. We are a fax machine five years after they invented email. What we’re seeing on TV now is how a horse felt when it first saw a Model T. You know what ABC’s big plan is to win viewers back? Invite Will Smith to the Oscars next year and let him freak out whoever he wants.”

—“I know this all looks like a bunch of bullshit, but it’s not. We don’t kid you – we tell stories. Yes, our reviews are on the toilet right now. But with your financial support, they could be in one of those fancy Japanese restrooms.”