LOS ANGELES-The most effective fundraiser galas make guests feel fully immersed—and therefore motivated to donate. This idea of ​​full immersion was taken to the next level with the Center Theater Group’s recent Stories Unite Us Gala, held on April 23 at the Ahmanson Theater in downtown Los Angeles.

The 200 guests at the event experienced surprise and delight – and the magic of the theater – at every turn. The overarching theme celebrated the art of storytelling, so it made sense that the non-profit arts organization, along with producers JJLA, turned the event itself into a story about the power of theater and took guests on a behind-the-scenes journey of what it is like to produce a show in space.

“Guests were told they were coming to an immersive program, but were told very little about the actual details,” said Lee Doud, JJLA vice president and events director. “The aim was to give the guests a new perspective on the theater and stage they are familiar with.”

Attendees began their evening with an al fresco cocktail reception surrounded by bars and seating vignettes from the Center Theater Group’s prop and stage house. They could take photos in a 360-degree photo booth modeled after a theater dressing room and were entertained by Broadway and jazz music by The Dave Stephens Band. 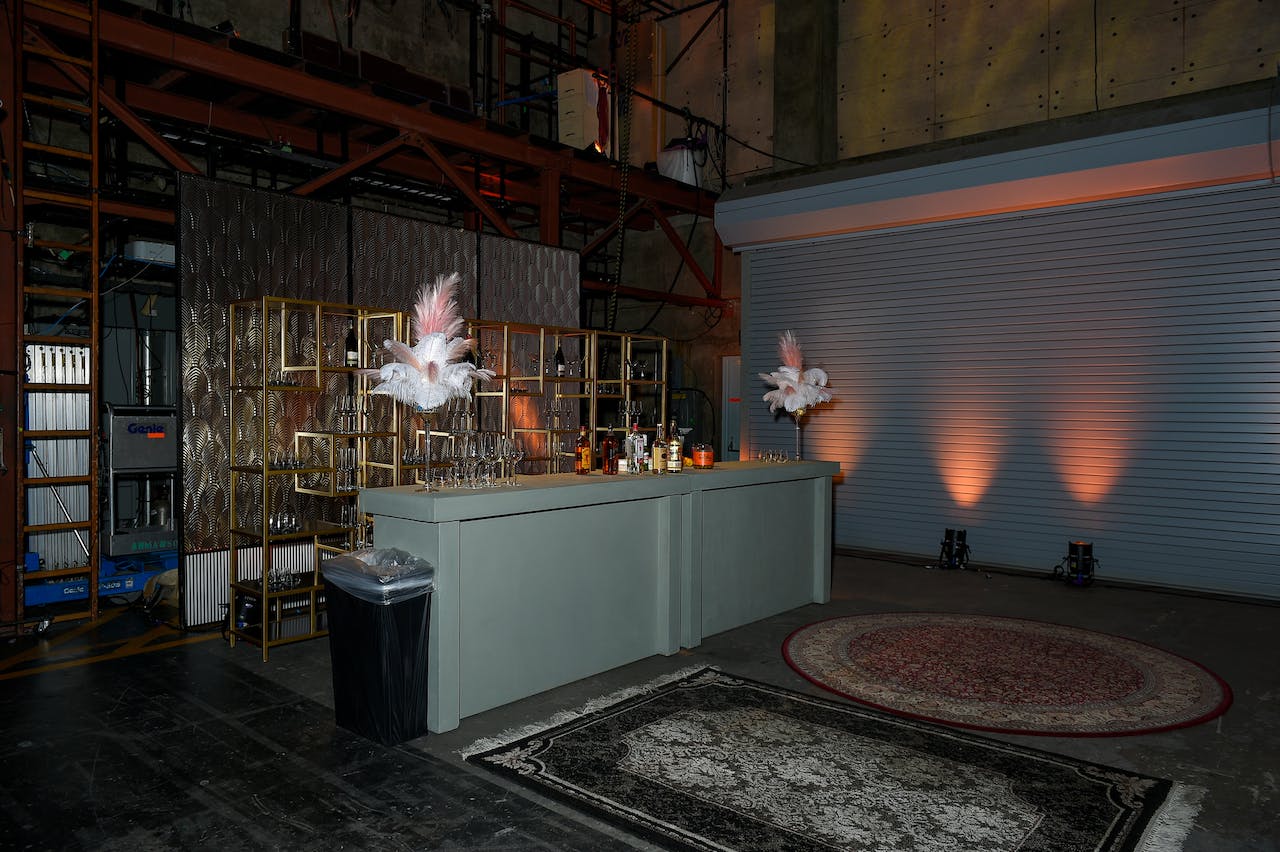 Bars and seating vignettes pulled from the Center Theater Group’s prop and stage house. “The Center Theater Group’s in-house team at camp has been really creative in pulling everything together that was in their power to create sets that really feel like something you would see on stage during a show,” Lee said Doud, Vice President and Events Director of JJLA.Photo: Capture Imaging 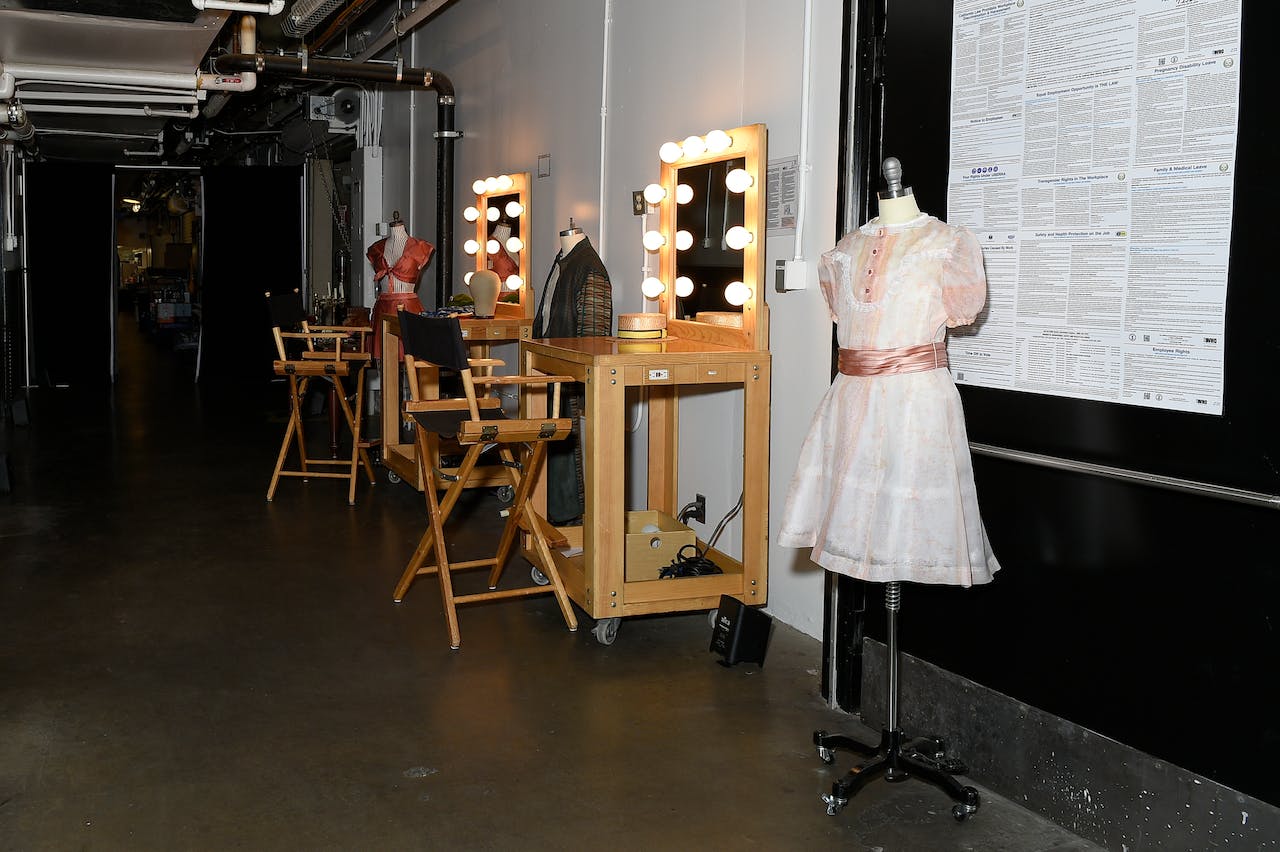 The 360-degree photo booth also used real props and costumes from the Center Theater Group’s warehouse. “We built a space that felt like a star’s dressing room, with a vanity and a stage door,” explained Doud. “People took off hats, glasses and coats – it just felt very playful.”Photo: Capture Imaging

But the real immersion began after guests heard a live stage manager call them onto the stage. Visitors entered the theater through the stage door – normally reserved for the cast and crew only – where they walked past more real props and experienced what it is like to enter the theater as a performer. Upon arrival, the venue was mostly empty, and the stage was lined with tables minimally dressed with raw linens and matte black cutlery. 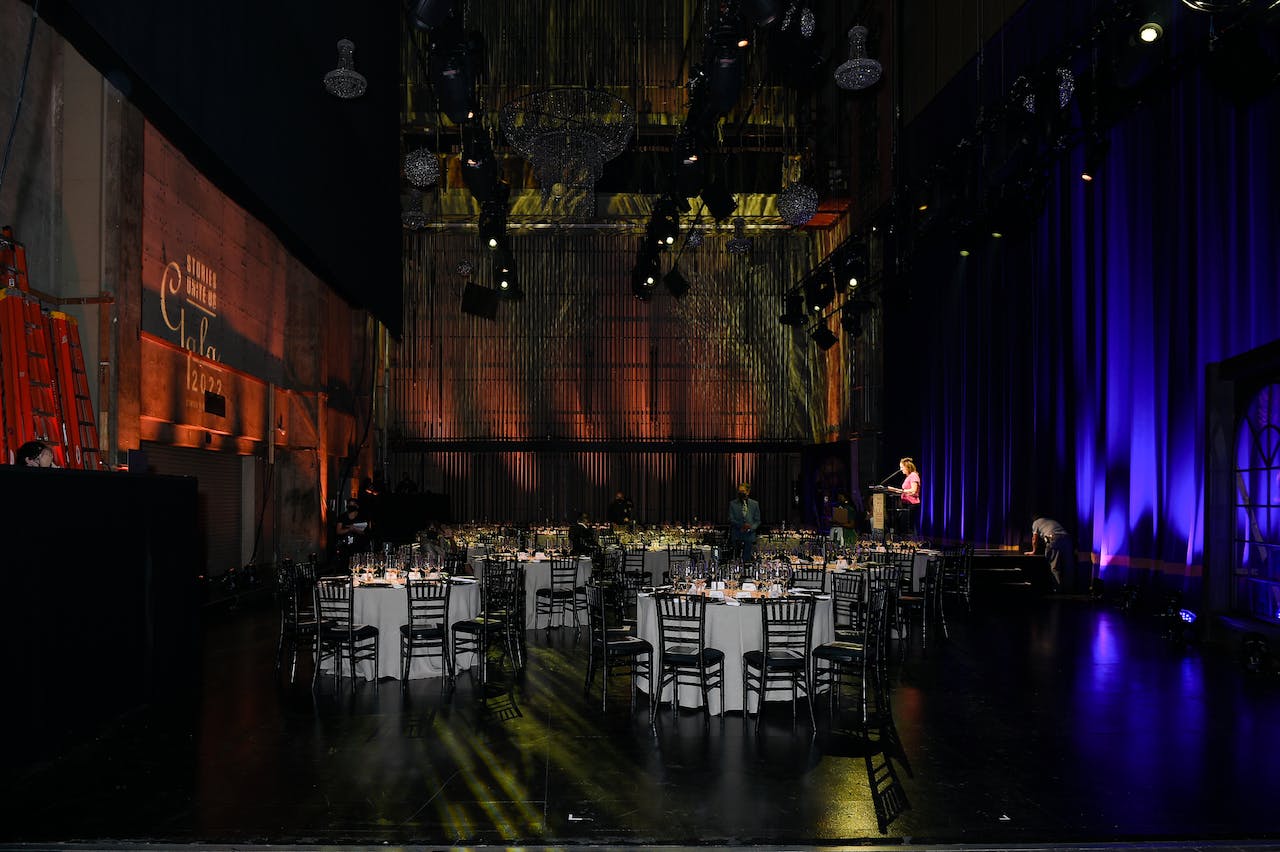 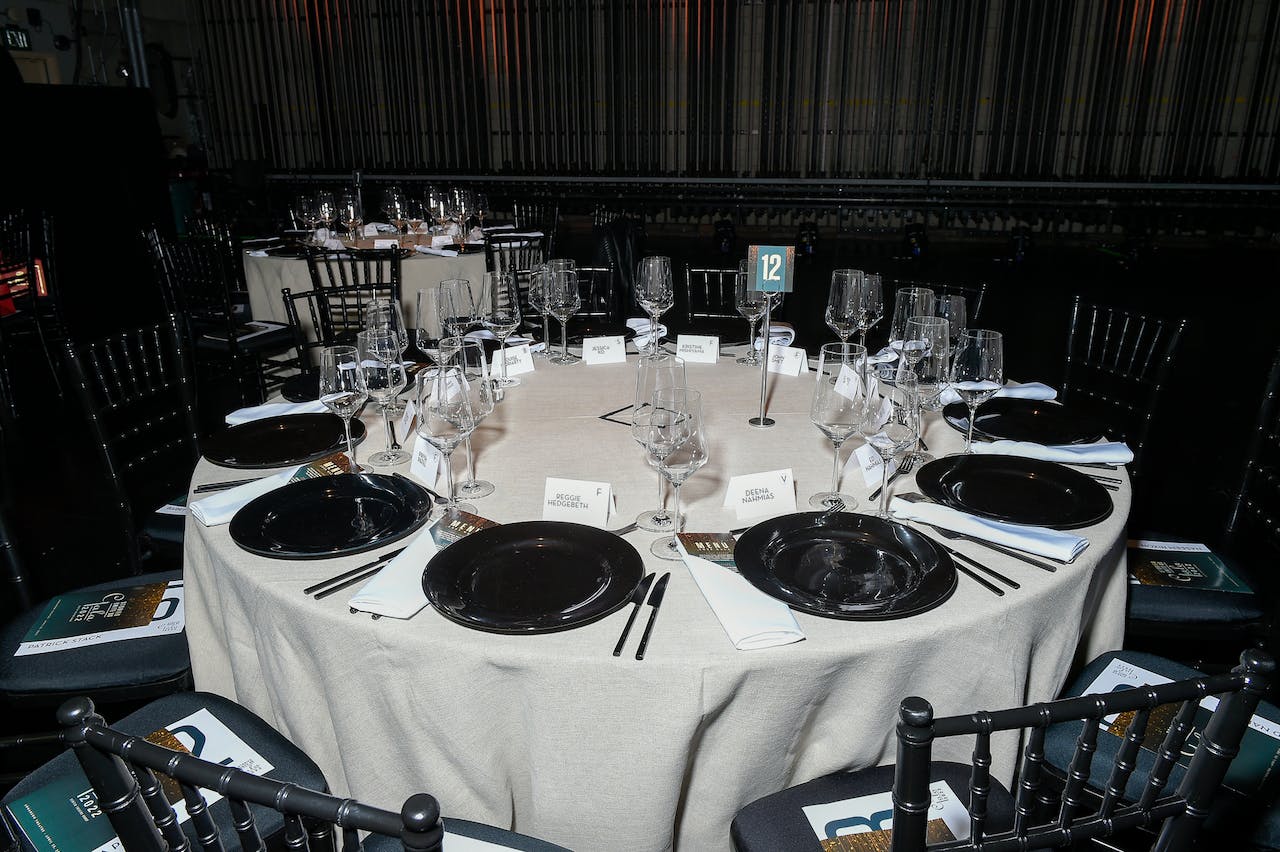 The tables originally had a black square in the middle that marked where a centerpiece went. As the space began to change, waiters delivered large feather centerpieces to each table.Photo: Capture ImagingAfter a few words of welcome, however, the guests were surprised when actress-director Phylicia Rashad rose from her seat and began talking about the magic of theater and her vision of what a fine dining experience in a banquet hall should be like.

“She started asking the stage manager for some sound and lights and some props, and as soon as she asked for those things, our stage manager started calling her over the loudspeaker,” Doud said.

Suddenly, the room began to transform into a living dining room. The light changed at Rashad’s request, staff provided festive feather centerpieces, a painted backdrop was added behind the audience, and oversized chandeliers were lowered from the ceiling.

“At that point the music changed and then all the waiters rushed at the guests with their main courses,” Doud added, calling the moment “sheer theatrical magic.”

“Seeing the audience and hearing them cheer loudly as dinner started was really fun.” 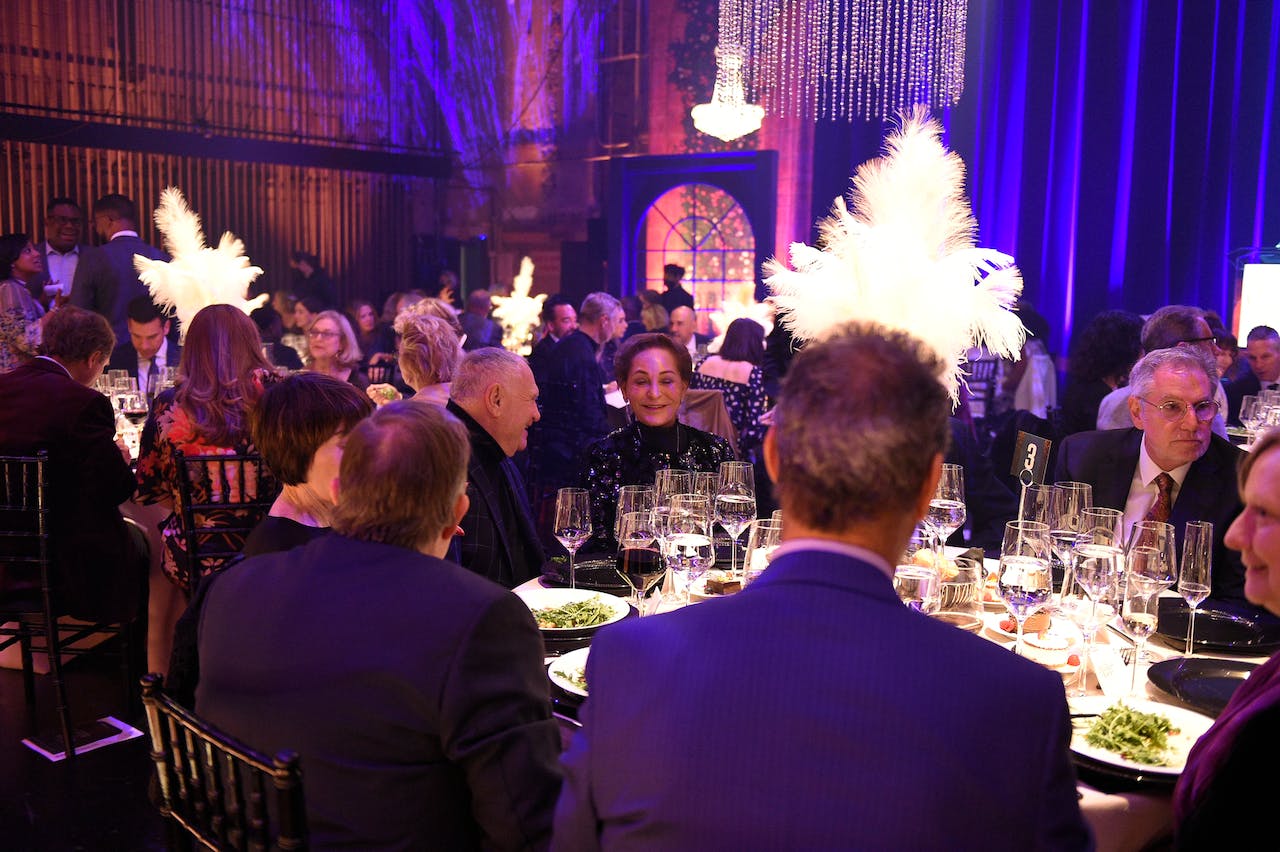 However, as with any good theatrical experience, the set changes didn’t stop there. During dinner, aspiring playwrights stood and read portions of their new work, their narrative prompting further changes in light, sound and setting.

“We integrated the work of the new playwrights, taking key elements from their work and finding ways to add some theatrical elements to make them stand out,” explained Doud. “For example, we had a playwright who wrote a play that described a character trapped in a nightmare. The lights and sounds and the addition of a rattling door helped emphasize her chilling words.” 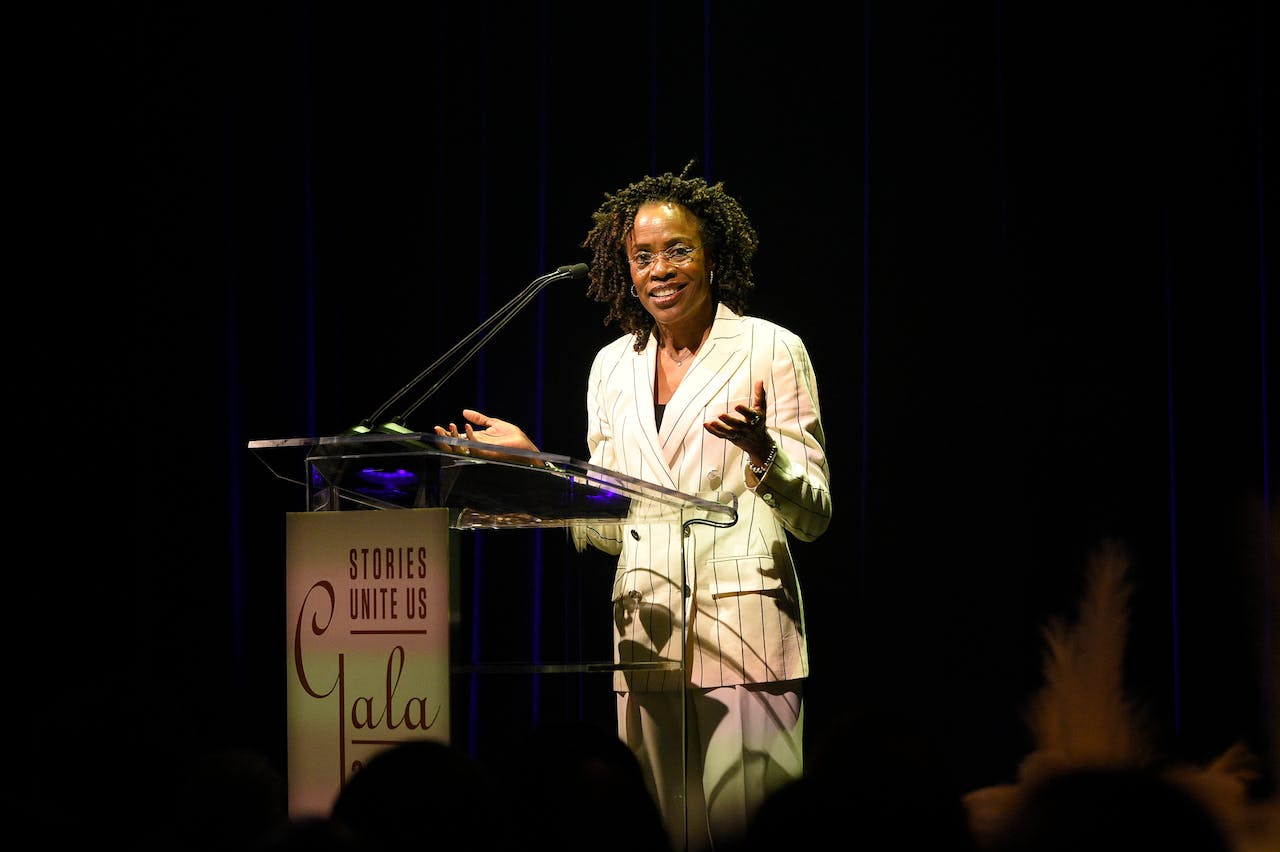 During dinner, aspiring playwrights stood and read portions of their new work, with their narration sparking further changes on set.Photo: Capture Imaging

The team also used the concept of the event to make an impression during the audition. When it came time to encourage guests to donate, the scenery and props were pulled off the stage again. “We brought it back to an empty stage and told guests that their generosity and donations allow our stages to feel full,” Doud said.

He continued, “It made it very clear what audience money would enable: it would enable new work, and it would enable this next generation of local artists here in Los Angeles to tell stories. Coming After two years without live theater it was great to see people really stepping up to the plate and giving.”

The room’s final transformation came towards the end of the evening when another new set was unveiled and Tony and Grammy-winning Broadway star Jennifer Holliday showed up to perform a 25-minute set. And to conclude the evening, the curtain rose so guests could enjoy the view of the entire theater – while a feather drop added a final wow moment. 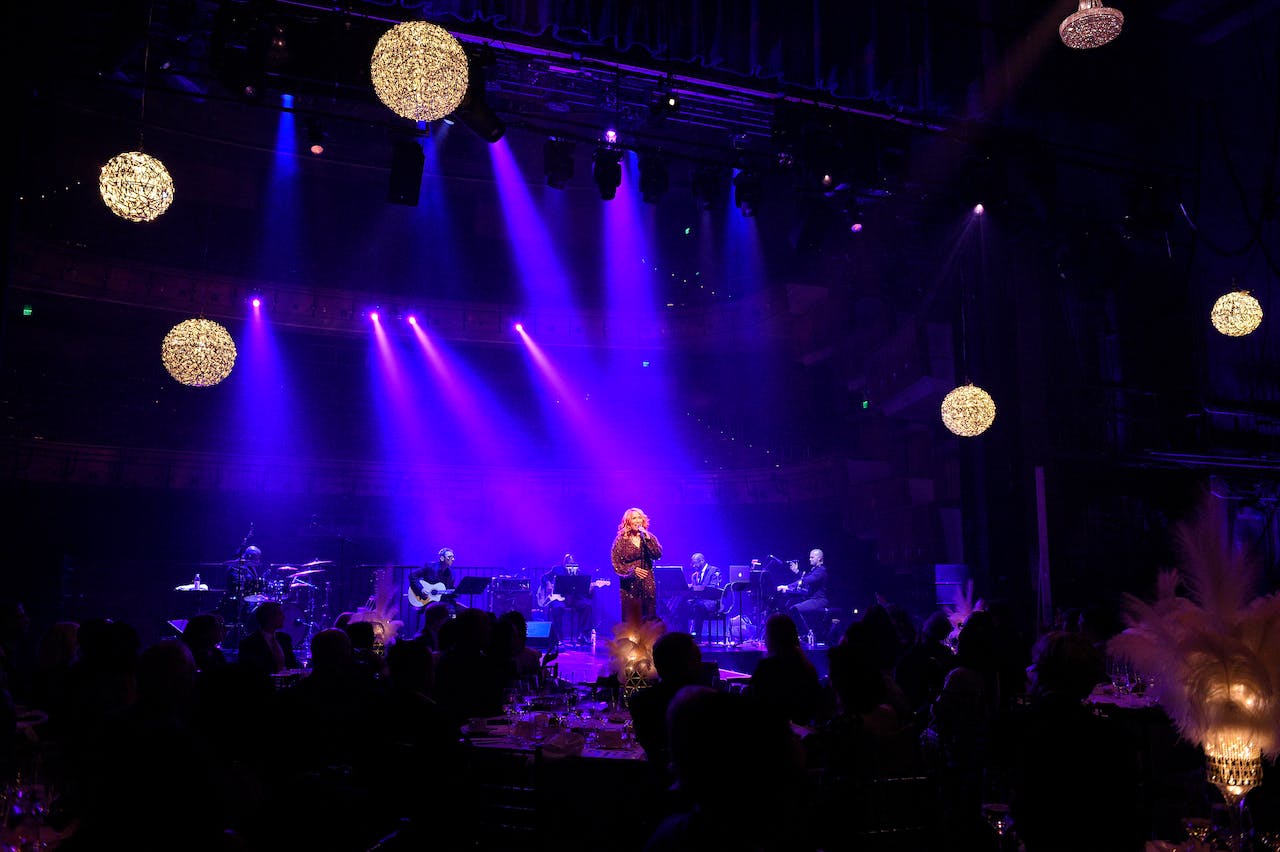 At the end of the evening, Broadway star Jennifer Holliday performed a 25-minute set.Photo: Capture Imaging

The idea for the unconventional gala came from the team at Center Theater Group and was intended to fall within a window of time between the loading of one production and the loading of another. “So we actually ended up with a completely blank stage — a blank slate, if you will — which was both a challenge and a blessing,” explained Doud, noting that timing meant the team had to bring in all the materials, including a completely new lighting grid within a time window of five days.

Because the theater is a unionized space, Doud found that they also had to work with a fully unionized workforce. Eventually, to help, the theater hired some of its in-house stage managers and sound designers to help execute the vision. “So it was a really collaborative effort,” he explained.

Doud offered some advice to other event producers in hopes of bringing event production back into his mission.

“In this case, the message that took place during the program reminded people that without their generous support, the theater will remain empty,” he said. “My advice to other producers is to get creative with storytelling, as I believe audiences are looking for unique experiences. Linking location and show elements directly to the mission will result in an enhanced guest experience.”