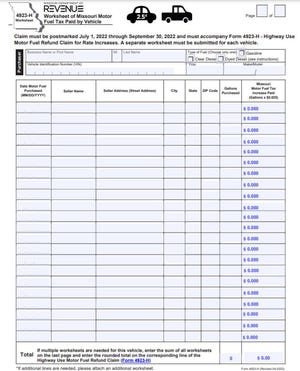 Gas prices in Missouri and across the country continue to hover near $5 a gallon, and federal officials in Washington are discussing ways to introduce a gas tax exemption. But drivers in Missouri could get a chunk of their fuel bill back starting in July — if they’re willing to jump through a few hoops.

The state gas tax is set to rise by 2.5 cents on the first of the month, part of a 2021 law that will gradually increase it annually over the next few years. From this day, if you are diligently saving receipts, you can request a refund of the money you have spent since October 1, 2021 due to the increase last year. Refunds can be submitted until September 30th.

Refund requests are submitted to the Missouri Department of Treasury website, dor.mo.gov. The department is developing a system for drivers to submit refund claims electronically, which its website says will be available before July 1. Vehicles weighing more than 26,000 pounds are not eligible for refunds.

The department has encouraged drivers to keep their receipts because the worksheet required to file a claim asks for dates, vendor names and the amount of gallons purchased when a driver refuels. However, you do not need to include actual receipts with your application. DOR has asked those who wish to make claims to retain the original receipts “for a period of three years for departmental review of the claim.”

Missouri’s gas tax is currently 19.5 cents per gallon, one of the lowest rates in the country. It will rise to 22 cents a gallon on July 1st, eventually ending at 29.5 cents a gallon in 2025.

The tax hike, passed by lawmakers in 2021, was backed by the top Republican in the Missouri Senate — now a nominee for the US Senate — and touted as a necessary and overdue investment in state infrastructure, the first hike in 25 years. Since implementation, the increase has been a target of Conservative and Republican lawmakers, several of whom tabled bills at last week’s meeting in Jefferson City aimed at reversing the gas tax hike.

President Biden this week called on states and Congress to enact a three-month gas tax exemption. During the legislative session earlier this year, legislation was introduced to create one in Missouri, but it never passed. Lawmakers would have to return to the Capitol for a special session. However, the home’s chamber is currently undergoing renovations, making an immediate return unlikely, the St. Louis Post-Dispatch reported Wednesday.

Galen Bacharier covers Missouri politics and government for the News-Leader. Contact him at [email protected], (573) 219-7440 or on Twitter @galenbacharier.