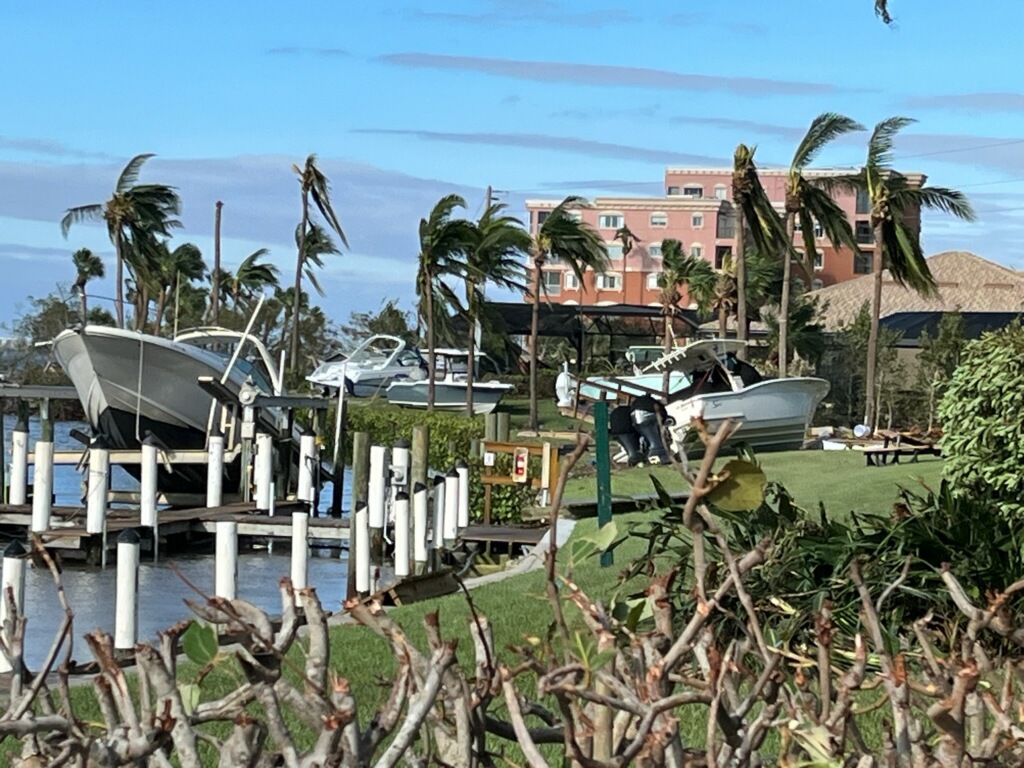 Dina Serra was sitting with her neighbors in her third floor condo in Fort Meyers when the lights went out.

Hurricane Ian had made landfall, rolling over buildings, utility poles, yachts and rowboats alike as it smashed through southwest Florida’s Gulf Coast and across the peninsula, causing catastrophic damage.

Serra, who grew up in Chesterfield Township, and her neighbors huddled on a couch with their dogs as the only thing they could do was watch the destruction that took place last week.

“It sounded like a jet engine blasting into your ear for six hours,” she said.

As the massive storm moved on to terrorize other parts of the state, the darkness grew eerily still under a starry sky.

The next morning, Floridians — at least those lucky enough to still have their living quarters — ventured out of their homes to get their first glimpse of the damage caused by Hurricane Ian.

“There are no words,” Serra said on Friday. “It’s like a war zone, like Ukraine. Every tree has fallen. There are big boats on our deck, on the lawn and in the swimming pools. It’s incredible.”

A few miles east at Jamaica Bay Village trailer park, another former Macomb resident posted a similar message. Like Serra, Christine “CK” (Kotila) Wisnewski and her husband Hans were thankful that their homes survived the storm mostly unscathed and suffered some damage.

Both said it could have been worse.

“No words can fully describe what we’ve been through,” Christine Wisnewski posted on social media. “We were blessed. Many, MANY have not been so lucky. If you know me, you know I prepared too much and as long as our home held up, I knew we would be fine afterward, and indeed we were.

At least 54 people were confirmed dead as of Saturday afternoon, including 27 people in Florida, mostly from drowning but others from the tragic aftermath of the storm, according to the Associated Press.

Rescue workers searched for survivors among Florida homes destroyed by Hurricane Ian, while authorities and stunned residents in South Carolina began examining casualties and assessing the damage caused by the powerful storm there.

As of Saturday, more than 1,000 people had been rescued from flooded areas on Florida’s southwest coast alone.

Wisnewski was a content creator and social media specialist at CK Media before moving to Fort Myers with her husband from Fraser in July 2021. She was a graduate of Fraser High School.

In her online post, she said her kittens, golf cart, carport and the couple’s home are safe despite the destruction around them.

“We’re happy, healthy and ready to clean up,” Wisnewski said.

Serra grew up in the Lottivue area of ​​Chesterfield, near Brandenburg Park, where she graduated from Anchor Bay High School before earning a bachelor’s degree in fashion design and merchandising. She is an IT consultant at Gartner. She formerly lived in Hazel Park and Salem, Mass. before moving to the Harbor Aisle Yacht and Racquet Club on the Caloosahatchee River in Fort Myers in 2004.

Serra said it’s hard to fully understand the destructive power of the hurricane. It completely wiped out much of the quirky honky tonks and beachside burger joints of Fort Myers Beach, as well as the marinas and fishing establishments that make up much of the region’s economy.

Having lived through past hurricanes, she considered leaving town for a few days, but says she eventually decided to stay based on “sweet-weather” weather forecasts.

Lee County, home of Fort Myers and the epicenter of the hurricane’s devastation on Florida’s Gulf Coast, officials waited a day longer than other nearby areas to issue evacuation orders.

By the time she realized Hurricane Ian was going to live up to its hype, “it was too late to go,” Serra said while watching military planes fly overhead.

“When the storm didn’t go away, it got really bad,” she said. “It started around noon and by 2pm it was getting worse and by 6pm it was still going strong. I kept thinking ‘When will this end?’

“It wouldn’t go on. Band after band came and flooded our neighborhood. It was a miracle we didn’t lose everything.”

The next day, she joined her roommates to assess the damage. When someone saw trees and branches blocking their roads, someone grabbed a chainsaw and began clearing the path. Serra found herself removing the cut branches.

The power is expected to be out for at least a week as the infrastructure for the power lines has to be rebuilt. At least 800,000 people are without power, according to Florida Power & Light.

But Serra found solace in helping others around her. She helped an elderly couple transport bottled water to their unit.

She and her colleagues at Ocean Church spent Friday preparing meals in packed lunches that were staged in trucks, along with clothing and toiletries, to be given away to the homeless in a pantry. Standing up for people in times of need gives her back the feeling of “normality”.

She believes in her belief in God “absolutely” and has survived the tragedy so far. She said the words of Psalm 23: “The Lord is my shepherd, I shall not want; He makes me lie in green pastures, he leads me to still waters,” have given it new meaning after experiencing another hurricane.

“Anyone who knows this passage knows that no matter how dire things are, there is light. I’m so blessed – I have a job that pays me right now, a boss who understands me and allows me to help people, I don’t feel uncomfortable.

“There are so many others who are even worse off.”