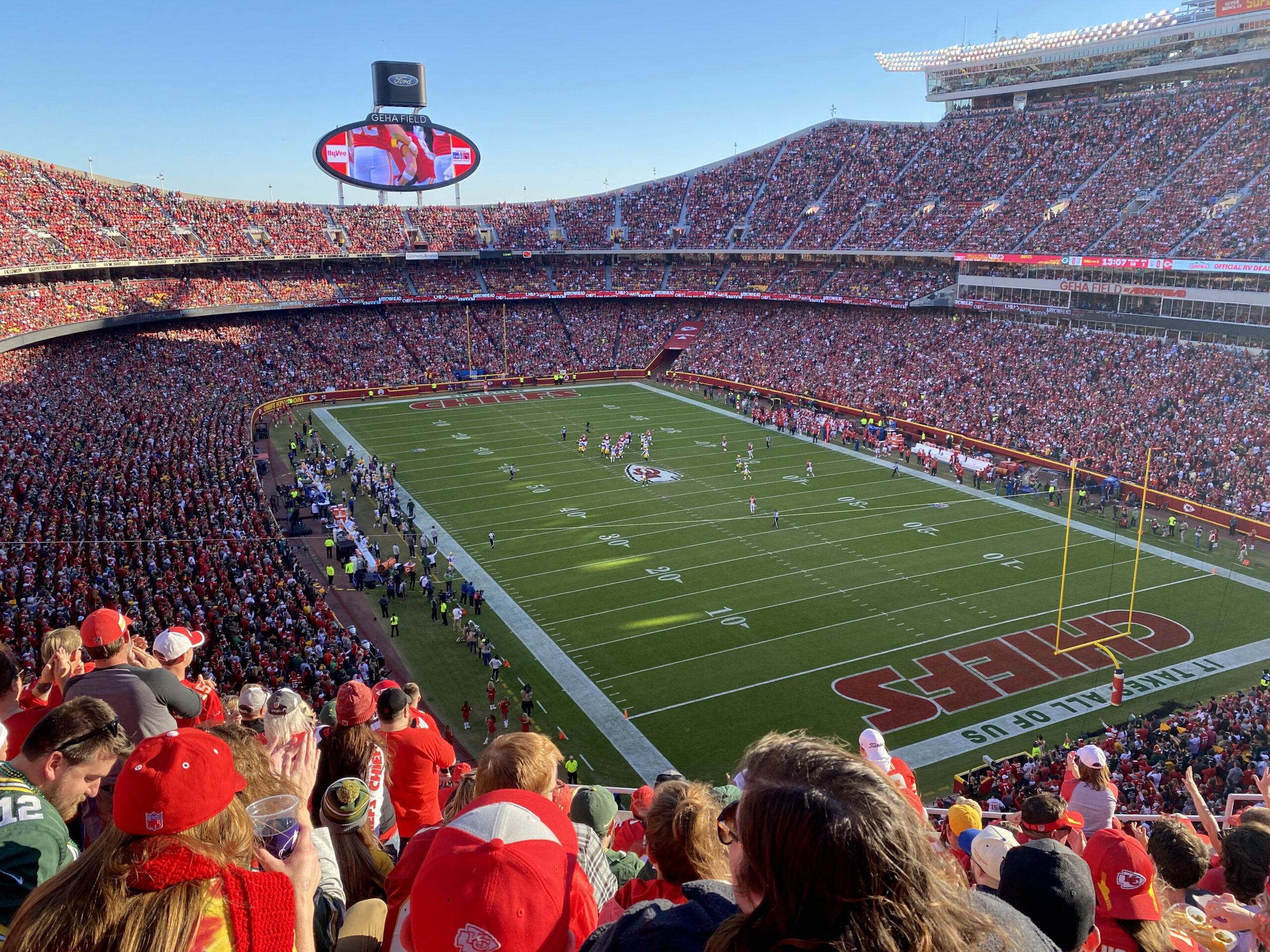 Kansas Reflector welcomes opinion pieces from writers who share our goal of expanding the conversation about how public policies impact the daily lives of people in our state. Eric Thomas directs the Kansas Scholastic Press Association and teaches visual journalism and photojournalism at the University of Kansas.

Sunday night, I sat on the couch with a cocktail in hand and watched Chiefs quarterback Patrick Mahomes trundle onto the field. Kansas City was four minutes behind the Los Angeles Chargers and had to drive 75 yards in the final 1:46 to get a touchdown. A field goal wouldn’t do.

And yet I lay there on the sofa.

I didn’t pace up and down the room. I haven’t checked the Chiefs’ odds of winning. Like so many other fans of Kansas City-area teams over the past decade, I’ve waited for my team’s destined victory.

Supporting the region’s teams for the past 10 years has been like playing the old video game Frogger – only without the splat. We’ve crossed the road, from one team’s joy to another’s championships.

As the Royals faltered, Sporting Kansas City led their league. As Sporting faded, the Chiefs rose. When the Chiefs lost in the playoffs, the Jayhawks won in March Madness. If you’re willing to give up your passionate fandom of one team going down for the rise of another, the Kansas City area is the place to be a fan.

My 13 year old boy has really never known the darkness of living in a sports swamp. Freed from a day off from school in 2015, he boarded a bus into downtown Kansas City to catch a glimpse of the Royals World Series parade.

Four years later, we watched the Chiefs board double-decker buses for their own celebration. Sporting KC gave us the opportunity to see two players who represented the United States at the World Cup. Kansas City’s professional sports have always afforded him a brilliant local team.

He also led the Jayhawks men’s basketball team to the championship in his bracket that year. The University of Kansas’ dominance of Big 12 basketball bordered on the absurd during our last decade and even before. Big 12 basketball teams can win the regular season title, the conference tournament title, or both. The Jayhawks have won or shared the regular-season title 20 times. The other 11 teams? Only 11 tracks together. The Jayhawks still won almost half of the conference tournament, a format that makes it far easier for superior teams to drop out with a bad result.

(And who knew the 2022 Football Jayhawks would pull off that screeching about-face of a season?)

That was not always so. The Royals and Chiefs have tested fans with long stretches of misery. Simply calling the futility flanking the Royals’ 2014 and 2015 seasons “lost seasons” understates the grim nature of these teams. Since 2002, Royals fans have endured six seasons with 100 or more losses.

That was not always so. The Royals and Chiefs have tested fans with long stretches of misery. Simply calling the futility flanking the Royals’ 2014 and 2015 seasons “lost seasons” understates the grim nature of these teams. Since 2002, Royals fans have endured six seasons with 100 or more losses.

Likewise, the Chiefs are claiming an era of sour football — especially compared to the current golden age. The youngest teams are unprecedentedly hot, having won six straight AFC West Division titles. You’re ready to win another one. In the past seven seasons (excluding the current season), the Chiefs have won 83 games.

Here’s your trivia question: How many seasons would it have taken to get 83 wins if you started counting in 1972? The answer: 14 – twice as many as during the Andy Reid era.

Consider the psychological toll of living in a city that has lost so many times. And consider how invincible we feel when we always have a winner in the region.

It can certainly lead us to arrogance. Or, as I experienced Sunday watching Mahomes rally the Chiefs, it inspires a cool confidence, a relaxed assurance that we fans needn’t worry. That will be okay. We believe we will win.

In less than two minutes, Mahomes threw a pass and then another to break up the Chargers’ defense. The touchdown to tight end Travis Kelce felt less like surprise fan euphoria and more like deja vu. Like Lorenzo Cain, who made a circus catch in outfield in 2015. Like opening a sports app on our phones to see how Sporting KC is progressing in their tournament. Like Bill Self, grinning as he climbed the ladder to fell the nets.

The danger of a run like this is forgetting to enjoy it. Just ask fans in Detroit, with four major sports teams, most of which aren’t setting records, let alone making any meaningful progress in the playoffs.

Despite three Super Bowl appearances, Cincinnati does not have a single trophy. Add this to Cincinnati’s woes: the unfortunate Reds who haven’t won their division in the last 10 years.

I’m asking you as fellow fans. Use all your superstitions to keep this streak going. Do not wash the lucky socks. Drive the same way to the stadium every week. Eat the same pre-game meal with sauerkraut and bratwurst.

But whatever you do, don’t close your eyes. This is too rare – and fun – to miss.

Through its voice section, the Kansas Reflector works to amplify the voices of people affected by public policy or excluded from public debate. Find information here, including how to submit your own comment.