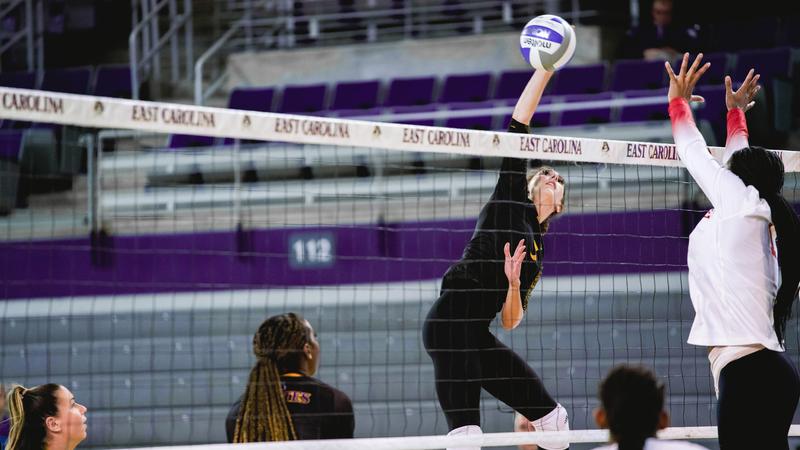 The Pirates (12-19, 7-11 AAC) finished their home table with a 7-6 record while also securing their seventh league win — the second-highest in a single season for the program since joining AAC. The Owls fell to 10-20 and 4-15. ECU finished Temple’s relay series sweep, winning seven of the last 10 meetings.

Angeles Alderete recorded another 20+ kills – her 12th of the season – and finished her first campaign at the Minges Coliseum with 21 kills, five digs and a .357 batting average. Izzy Marinelli added 12 kills, five digs, and a .258 hit mark to her ledger Kenzie Beckham Tie for the match high with 13 digs.

The Purple and Gold fell behind 12-9 to start, before responding with a 5-2 run to tie the score at 14 after a Marinelli kill. ECU moved forward from there, scoring 15 of the next 18 points to meet the set point at 24-18. Temple faltered on the last rally and sent the ball wide.

With a 16 tie in the second frame, the Owls took the lead with a kill from Taylor Davenport. Temple seemed in control towards the end of proceedings, leading 24-22, but a Marinelli kill and an attacking error from Davenport gave the stanza extra points. After the sides battled to a 27-27 deadlock, Alderete and Shaylynn Hall teamed up for a block and Alderete knocked down a kill to give the Pirates the set.

East Carolina faced one of its biggest deficits of the day in game three, falling 15-10 after a Jelena Prolic kill. A 10-5 pirate run got the home side back in the thick of things when Alderete matched Beckham’s assist for a 20th equaliser. The Owls had two chances to finish the frame, leading by 24:22, but Alderete and Marinelli responded with back-to-back kills to keep it going. Temple couldn’t find a foothold in the end, giving ECU the set and sweep through two offensive misfires.

Next: East Carolina wraps up the 2022 campaign with a 6 p.m. first serve Friday night in Cincinnati.