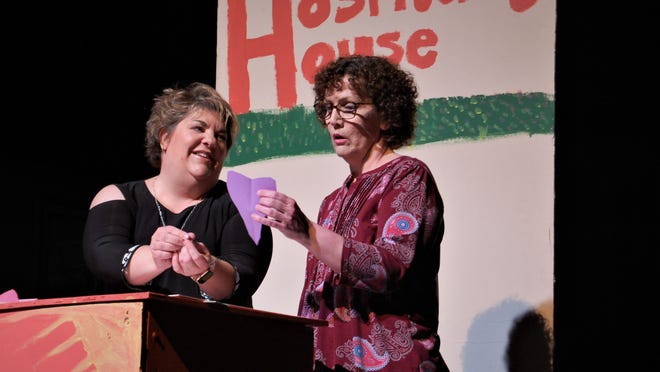 FARMINGTON — It has been 15 years since Cyndi Bolen has been associated with a Theater Ensemble Arts production, having starred in the cast of the company’s 2007 presentation of Steel Magnolias.

But in the following years she remained loyal to the organization as a season ticket holder. And she stayed in touch with TEA regular Chuck Holmes, a high school classmate and friend who has been pushing her for years to return to the company and run a show.

Holmes’ dogged lobbying has finally paid off as Bolen, a college theater major, will helm the TEA production of The Red Velvet Cake War, which opens this weekend. Bolen admitted she had to tap some rust off when rehearsals for the show began, but she says she quickly slipped back into the routine of being part of a community theater production.

“Once theater is in your blood, it never leaves you,” she said.

Bolen had talked Holmes into starring in a show she was directing many years ago, so she felt she still owed him a favor when he chased after her to join the TEA family. The Farmington native said she resisted his pleas for many years, but when she read the script for The Red Velvet Cake War, a raucous comedy directed by Jessie Jones, Nicholas Hope and Jamie Wooten, she realized that the Time had come to make good their debts.

“Recently when they were doing a reading (of ‘The Red Velvet Cake War’) he put a script in my mailbox,” she said. “I read it and thought it was hilarious.”

“I just loved it,” she said, “and I was like, ‘If I’m ever going to do it, the time has come because the material is so good.'”

“It’s just funny from cover to cover,” she said. “I love the characters. I love the premise.”

The plot involves a plan by cousins ​​- portrayed by Stephanie Lewis and Clara Johnson, Annette DiGiacomo and Lori Boettler – to hold a family reunion in their small Texas town of Sweetgum, Texas, and a high-stakes bet between two of the characters who to determine who can bake the best red velvet cake for the event?

The director said the cast were all TEA veterans and she enjoyed watching her actors make the characters their own.

“As a director, reading a script gives you an idea of ​​the characters in your head,” she said. “But that interpretation evolves with the cast. And I couldn’t be happier (with these actors). They brought the characters to life in their own unique way. They did a fabulous job, every single one of them. “

That helped make Bolen’s return to the community theater realm a pleasant experience, she said.

“I think you forget how complicated it can be,” she said of the experience of directing a production. “It takes a lot of time and energy. But we kept laughing. And our goal is to have a break from what’s going on in the world.”

The Red Velvet Cake War will be presented by the Theater Ensemble Arts on Friday, May 20 and Saturday, May 21 at 7:30 p.m. at Farmington High School’s Spotlight Theater, 2200 N. Sunset Ave. Tickets are $12 for adults, and $10 for students and seniors. They can be purchased online at https://theater-ensemble-arts.square.site/ or at the door. Production will resume May 27-29. Call 505-326-2839.

Mike Easterling can be reached at 505-564-4610 or [email protected] Support local journalism with a digital subscription: http://bit.ly/2I6TU0e.