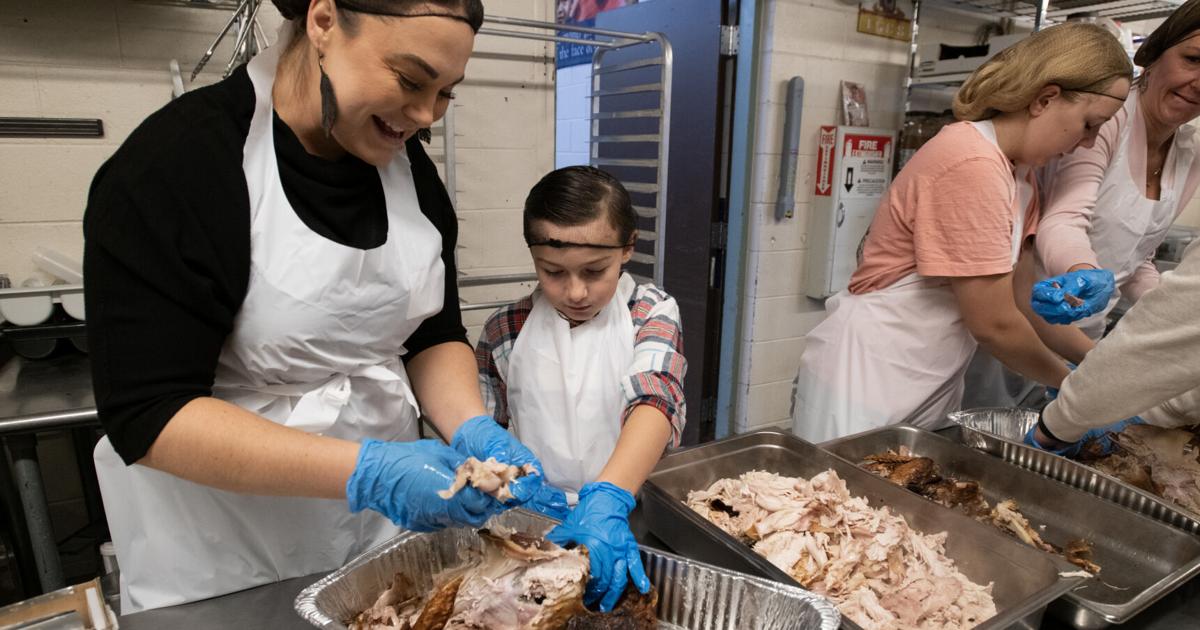 While many in Colorado Springs spent their Thanksgiving day eating with friends and family, some chose to spend their day giving back to the community.

One such person is Alycia Erickson, pastor of Pikes Peak Metropolitan Church in Colorado Springs.

Typically on Thanksgiving, LGBTQ+ nightclub Club Q hosts a Friendsgiving event for those who may not have family to spend the holidays with. However, after the mass shootings over the weekend, Club Q is unable to host the event.

Erickson and Pikes Peak Metropolitan Church, a church that Erickson says is made up primarily of members of the LGBTQ+ community, decided to work together to host the Friendsgiving event.

“We wanted to make sure people could come together and be one community and be one family together in a safe place,” Erickson said. “Our space has always been a safe and affirming place for people of all gender identities and sexual orientations.”

Erickson explained that it is important to ensure the Friendsgiving event can take place as LGBTQ+ people often do not have family they would like to spend the holiday with.

“A lot of people in the queer community have difficult relationships with their family members,” Erickson said. “To be able to be in a space where you can walk through the door and be who you are, without looks, without judgement, is an immense gift for anyone. We wanted to make sure we could offer that to people.”

Another group who spent their Thanksgiving giving back were Salvation Army volunteers.

Hundreds of volunteers gathered at four different Salvation Army locations in El Paso and Teller counties on Thanksgiving afternoon to give back by providing thousands of free meals to those in need.

For those who volunteer their vacation afternoons with The Salvation Army, they said they do so because they believe it is important to give back to those who may not have this on Thanksgiving and a sense of community and family to mediate.

“What I see with a lot of people here is that they’re alone on Thanksgiving,” said Robin Czyz, a Salvation Army volunteer. “So it’s a place to be part of a community, to talk to others and to have a good meal.”

“We feed people 365 days a year, but Thanksgiving isn’t a meal,” said Capt. Doug Hanson, El Paso County coordinator for The Salvation Army. “It’s about family, a party and belonging to a community.”

Hanson said over 200 people will volunteer at the Salvation Army’s four locations in El Paso and Teller counties and they are expected to serve thousands of meals Thursday afternoon.

“Without her, none of this would have been possible,” said Hanson.

Czyz is a volunteer attending her seventh Thanksgiving with the Salvation Army, something she says has become an important part of her life over the years.

Eric Yanes is attending his first Salvation Army Thanksgiving meal program, something he said he wanted to do to give back to an organization that has helped him so much over the years.

“This program, believe it or not, has changed my life,” Yanes said of the Salvation Army’s Veterans Utility program. “I wouldn’t be here now without this program.”

Yanes spoke about how the Salvation Army Veterans Program has helped him go from being homeless and without a car to having an apartment and a full-time job.

Fellowship is a word often heard when standing at the Salvation Army’s Thanksgiving dinner, and something that means a lot to those who work with the organization.

“They are just wonderful people,” Czyz said. “They give and love… I don’t know how else to explain it.”

While it may be Yanes’ first experience as a Salvation Army volunteer, he said it definitely wouldn’t be his last.

“The first of many more years, many more,” Yanes said.

Given what happened at Club Q over the weekend, where five people lost their lives and 17 others were injured when a person entered the nightclub with a gun, Erickson said today is more important than ever.

“These are my people, they’re my family too,” Erickson said. “I can’t think of anything more sacred to do than this.”

Hanson said he expects over 2,500 people to attend the lunchtime event Thursday afternoon, and that the Colorado Springs Salvation Army alone would serve over 3,000 meals between pick-up meals, deliveries and in-person guests.

“Serving others on a holiday, that’s what it’s all about, isn’t it?” said Czyz.