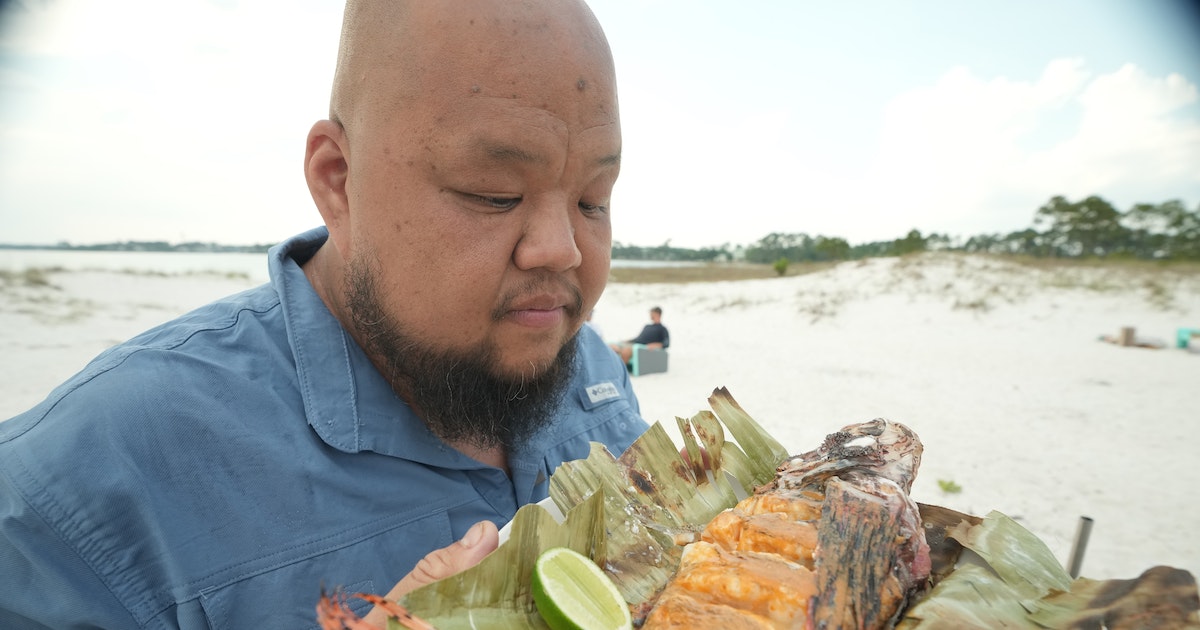 Some people put up with a lot on the job. But Yia Vang? He was bitten by a Burmese python in the Florida Everglades. In front of the camera.

That was just a job threat for the new appearance of the Minnesota chef, who hosts the Outdoor Channel series Feral. The show, which premieres Nov. 28, has Vang learn to hunt the invasive species that threaten ecosystems across the United States and then use his cooking skills to demonstrate just how delicious they can be.

“It bit me,” he says on the show after turning his razor-sharp enemy into dinner. “So I bit it back.”

In episodes of Feral, the Union Hmong Kitchen chef cooks mysterious Chinese snails in Wisconsin, lake trout in Yosemite National Park, iguanas in Fort Lauderdale and habitat-destroying crayfish in Minnesota. (“If you know anything about Minnesotans,” he said, “don’t mess with their walleye.”)

It’s his first series on a national network, although Vang is already a familiar face on the Twin Cities screens. He is the host of the TPT series Relish, in which he interviews local chefs about dishes from their culture. This summer he appeared on the Netflix reboot Iron Chef, which gave him a national platform to showcase his Hmong cuisine. He also gained notoriety this year with a James Beard Award nomination for Best Chef in the Midwest.

“Feral” is not his only new TV project. He can be seen on a Minnesota episode of Dirt, a YouTube show for Huckberry, an outdoor men’s line. And he’s appearing on the December 16 PBS series Craft in America — the episode focuses on St. Paul’s Hmong community.

Vang uses all of these opportunities to tell the story of his family, his community, and especially his food. When it premieres, “Feral” could be the first national television show to have a Hmong host, according to the producers.

“It’s somewhat groundbreaking,” said Mitch Petrie, vice president of programming at Outdoor Sportsman Group, which owns the Outdoor Channel. “It is important. We have a strong Hmong population here and I think it’s just a great opportunity for the world to get to know Yia and his cuisine.”

“Feral” is a production of Intuitive Content, the company led by Andrew Zimmer that created television vehicles for Minnesota culinary talent such as B. “Zoë Bakes” by Zoë François on the Magnolia Network.

Patrick Weiland, senior vice president of production and development at Intuitive Content, said Vang is the perfect star for “Feral” because “he’s not a cookie cutter host.”

“Yia is so authentic and he has this vulnerability,” Weiland said. “He’s not rehearsed, he’s a new talent, but it comes from the heart. He is connected to his origins in a very special way and is not afraid to draw these comparisons. It’s everything that makes someone a great TV presenter.”

When the company approached Vang about “Feral,” he knew from the start that it would be another way to bring Hmong culture to a wider audience.

“Right away I said this show is so Hmong, it’s not even funny,” Vang said. “The idea that you go into the unknown to harvest and hunt these animals and find a way to cook them — that’s so core to who we are as Hmong people.”

The first part of each show puts Vang in the wilderness with guides, where he learns the techniques to catch wild boar trampling on a farm or dive for lionfish off the Florida coast. “I’m a bit of a fish out of water, no pun intended,” he said.

The second part takes us to where Vang feels most comfortable – the kitchen – where he and the guides show each other how they would cook the animals in a dish. While certainly not a vegetarian-friendly series, by focusing on invasive species, the show raises issues of conservation, farming challenges, and the adoption of alternative food sources.

“This show hits upon all these types of hunter-gatherers because they can help restore balance to the environment by… [the invasive species] out there,” Weiland said.

And the trial uncovered more connections to Vang’s family history than he thought possible.

He told his father he would go to South Florida to hunt iguanas, a lizard that reproduced there after humans released their pets into the wild. Turns out his father used to hunt iguanas in Laos when he was a kid. “He was like, ‘They were up in the trees and we were going to shoot them.’ And then he goes on to explain: ‘This is how you make the best iguana.’ And then I’m in Fort Lauderdale making the iguana using the same recipe my father used in the hills of Laos over 60 years ago.”

Vang’s mother taught him how to catch and cook the Chinese mystery snails like the ones she used to catch in streams when he was young.

“As exciting as this show is for me, it’s that connection” with his family, Vang said, that makes it meaningful. “For having this ability to keep talking about my parents, their legacy, their heritage, their lineage.”

Filming has kept Vang touring the country, but this and his other television appearances have not diverted him from his local responsibilities, which include the Union Hmong Kitchen booth at Graze Food Hall in Minneapolis’ North Loop and the ongoing pop ups and includes fundraising for his long awaited next restaurant Vinai.

His heart beats for food. He knows not everyone will believe that.

“There’s always this whole ‘Oh yeah, he comes on TV and then he forgets about the restaurant and the quality of the food sucks, it’s all about him and his fame,'” he said.

“I have made it very clear to our staff and to everyone close to me that this is just another platform for us, as is the opportunity to be at the State Exhibition or in Graze or to do our residency. I’ll just be working on a different platform, but we’re still talking about the same message that hasn’t changed.

“And that message is that behind every type of food, there’s a story. But for me it started with Hmong food.”

“In our genre, we have a lot of experts in the world of hunting and fishing, and I found him attractive because he doesn’t present himself as an expert,” he said.

Which could explain the python bite.

Vang didn’t mind too much. “It doesn’t hurt because her teeth are so sharp, it’s like an injection. But the fact that a creature was dangling from your hand? That’s the part where you’re like, ‘Huh, interesting.’”

At least he can say he lived to tell the story.