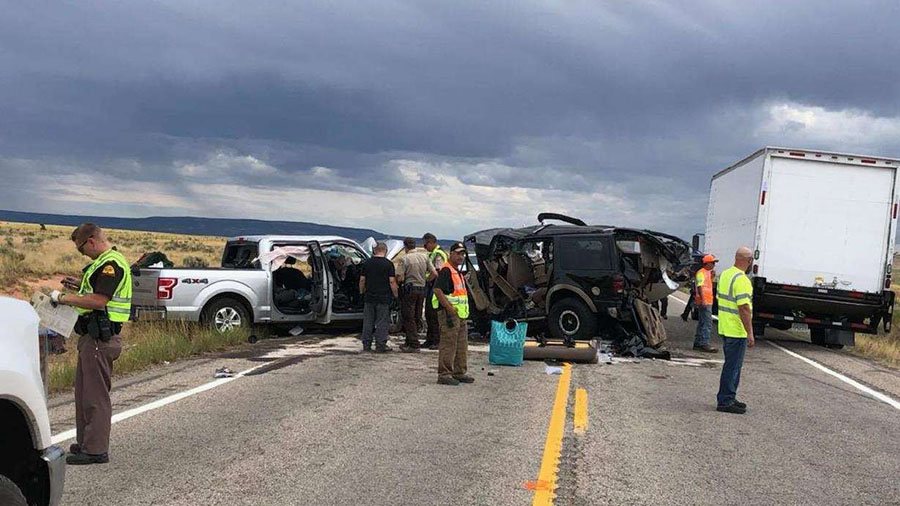 Salt Lake City — The Utah Court of Appeals has remanded a case to the 7th Circuit Court, ruling that the court erred in dismissing a case relating to the cause of a head-on collision that killed three people.

Toni Dannelle Glosenger, 53, was charged in May 2020 with triple count of manslaughter, a second-degree felony and driving in the wrong side of the lane, a misdemeanor.

The charges were dismissed on February 1, 2021 after Judge Don Torgerson ruled that there was insufficient evidence to bring the case to trial, the appeals court statement explains. It said the prosecutors, identified by the judge, had presented no evidence that Glosenger “was criminally reckless.”

According to police, Glosenger was driving her truck in San Juan County when her truck swerved across the dual carriageway and struck an SUV towing a boat in August 2019.

The collision killed both people in the SUV, Kenneth Harding, 75, and Frances Harding, 73, of Goodman, Ariz., as well as a passenger in Glosenger’s truck, 68-year-old Patricia Storm, of Minot, North Dakota, and a cat.

Glosenger was left with serious injuries and flown by helicopter to a hospital in Grand Junction, Colorado.

The appeals court’s ruling said markings on the road and damage to the cars showed it was a “passenger-to-passenger” collision that occurred in the northbound lane – there were no skid marks on the side facing South where Glosenger’s truck had driven.

A report cited in the statement says Glosenger was driving 67.2 mph about 5 seconds before the collision, just over the 65 mph speed limit but not slowing down and was driving 68 mph at the time of the collision. This lack of speed spikes or drops is incompatible with sleepy driving, the report said.

The report also showed a sharp left turn in the final three-tenths of a second before impact on a straight stretch of road, the report said. Distracted driving was cited in the report as a possible reason for the swerve, although there were no incoming calls or texts and it is not known if Glosenger’s phone was being used at the time of the accident.

An agent who had previously testified in the case said Glosenger did not recall any details about the accident at the hospital, but months later she told the agent she tried to overtake a tractor-trailer when the lane ended and she decided to meet traffic to try to cross the street. The agent stated in the testimony cited in the statement that testimony, information from the car, and photos of the scene did not support this story.

With all this information, the charges in the circuit court were not bound, after Torgerson said there were several options that could show recklessness, but they were all speculative.

The circuit court said Glosenger’s phone conversation with the agent showed she was aware and disregarded the risk of injury – she chose not to brake and slowed down.

“The judge recognized that the collision was caused when Glosenger ‘crossed the center line’ but concluded that no crime had been committed because there was ‘no explanation’. But that conclusion ignores the information Glosenger provided (to the agent) during their post-collision phone call,” the appeals court said.

The appeals court judges said there was evidence of flaws in her story, but since the charges are low to pass the preliminary hearing stage and the judge should draw conclusions in favor of the state, there is enough evidence to move the indictment towards one court proceedings.

“The state did not have to prove why Glosenger chose to turn into oncoming traffic; it only had to be shown that she was aware of the risk of harming herself and others and deliberately disregarded it,” the report says.

The appellate judges said the evidence presented could support a jury verdict in favor of Glosenger, but ruled that the preliminary hearing burden was satisfied and the case should go to trial.