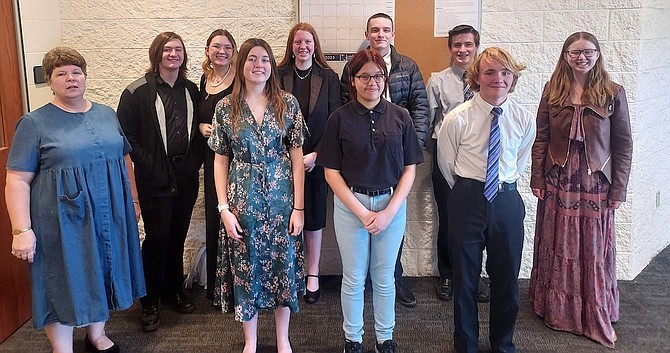 Students from the Churchill County High School Choir auditioned for the All-State Choir this month.

Kailyn Mann’s Algebra 1 students have been hard at work on their statistics project.

“Rather than taking a three-week course to learn the content, they complete a project that starts with creating a statistical question or a question that has more than one different answer,” Mann said.

Many students create questions that focus on what they like, e.g. E.g. sports or school subjects, and some create questions about things that surprise them. Student Mason Taylor was enthusiastic about this project.

“It’s a really cool way to learn about stats,” Taylor said. “I decided to ask people if they think they have a healthy relationship with their phone, and it was interesting to see the varied responses.”

The students collected their own data for their project.

“They could go to other classrooms, send emails, create Google forms, or collect data in person, but they had to make sure they were reporting 100 pieces of data,” Mann said.

After collecting the data, Mann covered how to create charts and calculate summaries of numbers in Google Sheets. Then the students created a presentation about their question and explained what could be misleading about their data and the importance of number summaries for data. The students found this project challenging, but they worked through the challenges and had fun watching their data come together.

“Stats take a lot more time than you think, like making sure you’ve used all your pieces of data. You also have to read through so many numbers, but then the computer does the heavy lifting, which is nice,” said student Karl Pettek.

Student Ally Chiaratti said her brain hurt at times, but she knows she’ll be using all of these in the future, so she’s glad they’re learning now.

The students in Travis Ryness’s class spent the last week working in small groups on their social studies project. They had to choose a historical theme for research and then incorporate that theme into their Minecraft world. They first had to choose a biome and then build their world from scratch. They chose subjects important to Nevada history such as mining, historic Virginia City, Fort Churchill, Pyramid Lake and the 40 Mile Desert.

Students present their worlds to their classmates when finished.

Students in Shannon Windriver’s class learned about the weather. Last week they learned about clouds and then performed a cloud-in-a-jar experiment that showed what happens when a cumulus cloud becomes too strong from condensation and becomes cumulonimbus.

“This was a fun and exciting look at how these clouds form. Because we can’t physically bring a cloud into the classroom, this experiment was a great way for the students to see what they learned about clouds right in front of their eyes,” Windriver said.

“Students have learned that no matter who they are or how big they are, their dreams are valid — which in itself is a powerful lesson,” Manning said.

They learned the importance and power of love and how not to judge others by their appearance. They have also learned to never give up and to keep going and to keep going. Martin Luther King Jr. believed in his dream. He believed in it so much that he never let it stop him from fighting for his dream, even when everything worked against him.