The number of COVID-19 patients in BC hospitals has declined since last week but remains elevated compared to when the province first switched to weekly reporting of pandemic data.

There were 540 test-positive patients in hospital as of Thursday, up from 596 at this time last week and the lowest total since April 21. 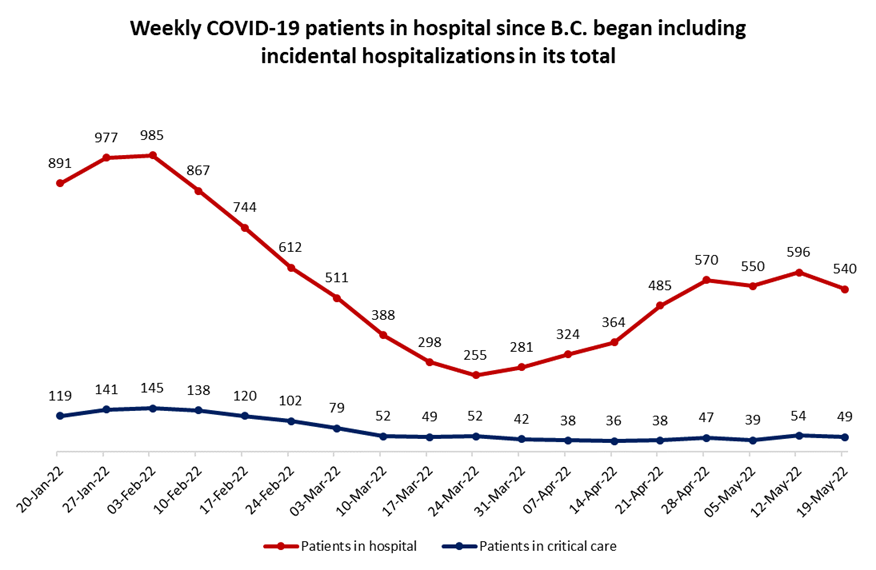 This chart shows the number of people with COVID-19 in BC hospitals on Thursdays since the province switched to a “hospital census” model to count hospital admissions in January 2022. (CTV)

Also as of Thursday, 49 people with COVID-19 were in the ICU in BC.

This is known as a “hospital count”. Since the province switched to counting hospitalizations in this way in January, there have been up to 985 coronavirus patients in the hospital and just 255.

The number of patients currently hospitalized and receiving critical care is the only current data the BC Center for Disease Control publishes in its weekly updates. All other data released each week refers to the last full epidemiological week, which ran from May 8th to May 14th.

During that period, there were 1,645 new laboratory-confirmed cases of COVID-19, marking the third straight week that new positive tests have declined in the province.

However, it should be noted that the province reports only a fraction of new infections each week. BC release totals reflect only cases confirmed by or epidemiologically linked to positive PCR tests, and most residents of the province do not qualify for publicly funded PCR testing under the current testing strategy. Positive rapid test results are neither collected nor reported by the province.

Still, declines in patients in hospital- and lab-confirmed cases — along with recent sewage surveillance in the Lower Mainland — are signs BC’s sixth wave of the pandemic has peaked, according to the independent institute’s latest analysis of pandemic data BC COVID- 19 modeling group.

However, the group’s report notes that hospitalization and case numbers remain high.

“While the second Omicron wave (BA.2-driven) appears to peak at a lower level than the first Omicron wave (BA.1-driven), hospital occupancy and cases (using an age-based correction for the underreporting) is still higher than at any earlier point during the pre-Omicron pandemic,” the report said.

Other data released by the BCCDC on Thursday shows no sustained declines.

For example, the number of new hospital admissions for the week of May 8-14 was essentially the same as the number reported last Thursday. It was 334 this week and 331 at first count last week.

Last week’s figures have since been revised to 391 new hospital admissions and the current week’s total is expected to be revised “as the data becomes more complete”, but the starting point for the two weeks is nearly identical.

Similarly, the BCCDC reported 59 new deaths for the week of May 8-14, the same number as for the previous week.

Deaths are measured as “30-day all-cause mortality,” meaning it includes anyone who dies within 30 days of a positive COVID-19 test, regardless of whether the disease is the cause of death.

The number of deaths will also be revised over time. Last week’s 59 new deaths, for example, were revised down to 84 as of Thursday. That’s the highest number of deaths the province has reported in a week since it switched to the all-cause model on April 2.

Two facilities — Annacis Island and Iona Island — have seen steady declines in viral loads for the past three weeks, according to the BCCDC.

The other three, on the other hand, show increasing tendencies, which are described in the current “Management Report” as follows:

As of May 14, 91 percent of BC residents ages five and older had received at least one shot, 88 percent had two, and 55 percent had three.

Eleven percent of BC residents age 70 and older have received a fourth shot, according to the BCCDC.