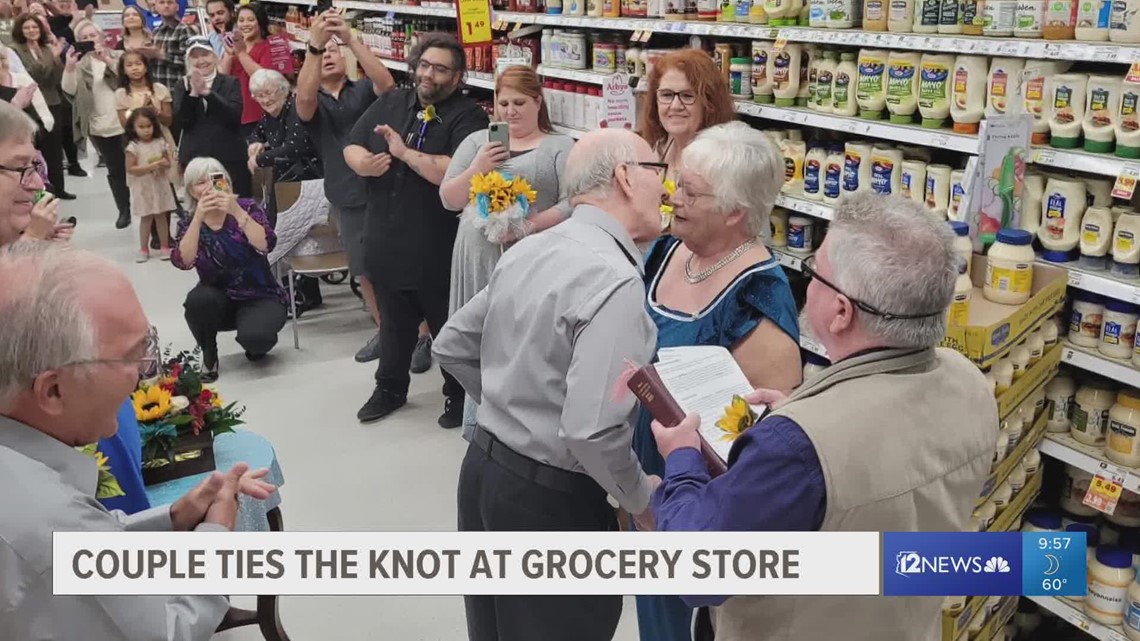 The venue was aisle eight at Casa Grande Fry’s on Florence Boulevard.

CASA GRANDE, Arizona – A trip to the grocery store can sometimes result in us spending more than we intended, forgetting things we wanted to buy, or like a couple in Arizona, it can be where you say, “I want.”

On November 19, Brenda and Dennis Delgado wed next to the lunch meat department and spice shelves in aisle eight at Casa Grande Fry’s on Florence Boulevard.

The couple married in the same place where they met in August 2021.

bond over their loss

Brenda was looking for Miracle Whip when a man approached her.

“We both had masks on and I say to her, ‘You know what’s the best part about wearing a mask?’ Dennis told her. “You could pass it [people] don’t wear a mask and curse them softly, they don’t hear a word from you’, and she started laughing.”

The following Sunday, Dennis went to church with Brenda. Not only did she go as a member, but she also took things that she had baked.

Baking had become her passion, a newfound hobby, after her husband of over 30 died of prostate cancer. She had been his caretaker for the last ten years of his life.

“After my husband died, I lost my sense of purpose,” Brenda said. “It’s the hardest thing I’ve ever had to do in my life.”

A pain Dennis could identify with. A little over a year before he met Brenda, he had also lost his 45-year-old wife. That heartbreak drove him away from God.

“I was mad at him for taking them from me and I wanted to apologize to him,” Dennis said.

Within a few months, the couple became closer. They bonded and helped each other mend their broken hearts.

Nine months after meeting in aisle eight, Brenda and Dennis got engaged at this point.

Then, in the same spot, between bottles of mayonnaise and ketchup, the couple tied the knot and said, “I do.”

“They hid me in the aisle next to the spice department,” Brenda recalls with a smile on her face.

Dennis waited anxiously on the other side.

“She came over. They gave the wedding march to others on their loudspeakers in the store. It was wonderful,” said Dennis.

Brenda wore a royal blue dress. Dennis, a heavily folded button-up. The couple were joined by family, friends and shoppers.

Fry’s staff go above and beyond, the Delgados said. They even got custom floral arrangements that included the condiments that brought them together — Miracle Whip and mayo.

“It was my idea to get married there,” Brenda said. “I’m kinda weird, okay.”

Although they admit that getting married in a grocery store might be silly, for them it was something they felt they had to do.

They want people to remember from their love story never to give up hope.

“On the lighter side,” Brenda said. “If you’re looking for love, go to Fry’s or don’t give up. Keep looking.”

“You never know when you’re going to be walking through the spice aisles at Fry’s and meeting someone you didn’t know you needed in your life,” Dennis said.

Discover amazing people, places and things in our state on our 12News YouTube playlist here.