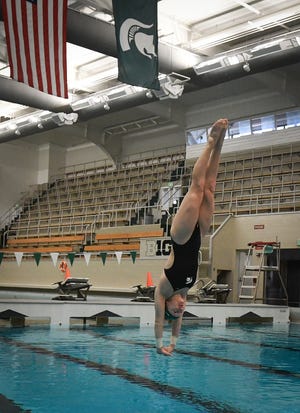 Title IX, giving women the right to equal opportunities in sport, was signed into law in 1972. To commemorate the 50th anniversary, Lansing State Journal will feature all 12 women’s sports in the state of Michigan in a series of articles in fall 2022.

More:A closer look at 50 years of Title IX and women’s sports at MSU

The Michigan State women’s swim and dive program became an official college sport in 1970. It wasn’t until 1978 that swimmers were finally able to use IM West as a practice facility. Before that, they had to practice at the IM Circle, as IM West was for men’s recreational use only.

In October 2020, both the women’s and men’s swim and dive programs were suspended by then-athlete director Bill Beekman, citing the financial crisis amid the COVID-19 pandemic and infrastructure issues with on-campus pools.

Since then, advocates have been working to resume both programs and there have been talks with the athletic department about a possible resumption of the teams.

1986-89 — The year was marked by many firsts for Michigan State Swimming and Diving. MSU placed fourth in the Big Ten championships in both 1986 and 1989. In 1986, Mary Schoenle won the 200-yard singles medley, the only Spartan to date to win the event. Two-time NCAA champion Julie Farrell was the first Michigan state jumper to be named Big Ten Diver of the Year in 1989. That same season, John Narcy was named Big Ten Diving Coach of the Year, also a first for MSU.

The Spartans qualified for the NCAA championships in 1986, 1987 and 1989. During that stretch, MSU had seven different athletes receive All-Big Ten selections. Some of the notable wins have come from swimmers like Mary Rozman, who won the Big Ten 50-meter freestyle in 1987 while also helping MSU win the 1986 400 freestyle relay and 1987 200 freestyle relay.

More:Amanda Ling is struggling not to be the last athlete in the history of swimming and diving in Michigan State

Based on the numbers

Where is the program now

Currently, university officials said they will be reaching out to athletes and supporters of the swim and dive program to “develop a plan for the team next academic year.” Kayla Williams, a former jumper at MSU from 2006-2010 and now a high school coach, says athletic director Alan Haller acted quickly when meeting the group and a follow-up discussion is currently in the works.

“Our engagement with AD Haller this month is our most promising achievement,” said Williams. “We are optimistic that the sports department will engage in good faith and by reinstatement we can achieve a win for all.”

More:Acclaimed former Michigan State athlete calls on board of trustees to save swim and dive program

What the future brings

Michigan State is poised to build a new recreation center within the next five years. On October 31, the university named Teresa Woodruff as interim president, in which she said her first meeting since taking office will be with executives from the offices of Title IX and Institutional Justice.

Williams, who is a co-contributor to the advocacy group Battle for Spartan Swim and Dive, says there is a staggering number of swimmers and divers who have had to compete elsewhere. As a former diver, she hopes they’ll get another chance at MSU.

“The university is well positioned to bring these teams back,” Williams said. “The efforts of our group, Battle for Spartan Swim and Dive, have shown that there is a large base of support for these teams. We’ve had hundreds of people pledge millions of dollars to help MSU reinstate both teams. We look forward to working together to rebuild our programs.”

This article is part of a larger project looking back at 50 years of Title IX and what women’s sport at MSU looks like today. To see the full project, click here.