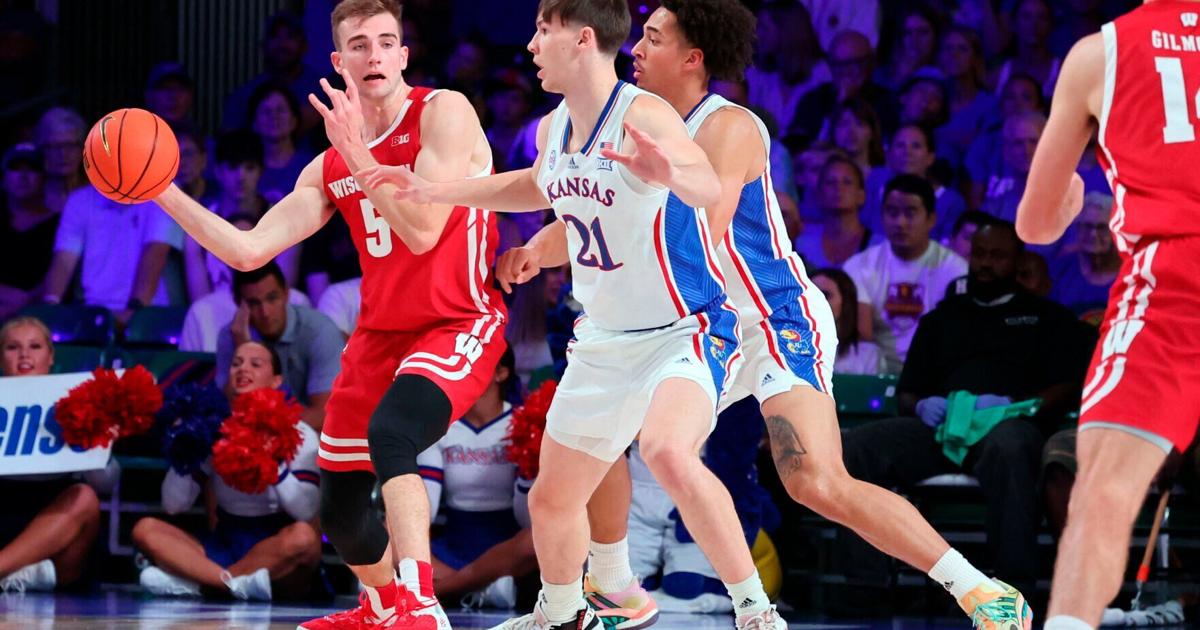 NASSAU, Bahamas — The University of Wisconsin men’s basketball team overcame a 15-point deficit in the second half to grab third-place Kansas with just over eight minutes remaining.

Kansas reclaimed the lead, retiring eight points with 3:40 to go, but Badgers senior Tyler Wahl put on a 9-0 run to play them with less than a minute to go up a point. UW got a key stop at the defensive end and newcomer Connor Essegian sunk two free throws to give the Badgers some breathing room.

On the ensuing possession, Kansas’ Zach Clemence missed a 3-point attempt to level the game, but Kevin McCullar saved the Jayhawks by nailing a 3-point second chance spot to force overtime.

Kansas batted first in overtime when Dajuan Harris put the Jayhawks ahead, but Wahl responded with a layup of his own while drawing a foul and hitting the free throw for a 3-point play. Harris scored again and Wahl responded again.

A point down, the Jayhawks had the ball with 20 seconds left. Clemence missed a 3-pointer, but a combination of not blocking or chasing the rebound on UW’s end allowed Kansas’ Bobby Pettiford to rush to the glass and less than a second to score before the end.

“They’re doing two games at the end of regulation and overtime that basically gave us the win,” Kansas coach Bill Self said. “We weren’t the best team today. We made some moves that allowed us to win.”

See where Wisconsin men’s basketball is going next November

It was a game of mismatched offensive performances for UW. The Badgers struggled to connect with shots in the first half but used their defense to prevent the Jayhawks, who held a 33-20 halftime lead, from running away with the game.

Then things started clicking for UW as they shot 48.3% in the second half to hit back and keep things interesting. Both teams struggled in overtime, with the Badgers scoring 28.6% and Kansas 33.3% overtime.

Kansas defeated UW on the boards 50-35, including 14 offensive rebounds, leading to 11 points for the Jayhawks’ second chance.

Jalen Wilson of Kansas led all players with 29 points as Kansas scored 38.7%.

“We’re not into morale wins,” said UW coach Greg Gard. “But this group showed me a lot today. We also learned that we have many things that we can still improve. These are the types of experiences you want at the beginning of the year. They want different results, obviously, but the determination and the courage and the willingness to keep fighting and to come back and play better in the second half… we just need to keep putting together bigger chunks of time to play at a high level.

The Badgers play USC in the third-place game Friday afternoon.

Here are three things that stood out:

Kansas pulls away in the first half

UW’s defense remained strong, holding Kansas to just 2-for-16 shooting until after the game’s second media timeout. The Jayhawks’ offense woke up afterwards when Gradey Dick hit back-to-back 3-pointers to start the run.

Everyone is on board at men’s basketball in Wisconsin, Bahamas

Wilson and Kevin McCullar made it a combined 7-for-17 to help the Jayhawks extend their 13-point lead at halftime. Wilson led the team with 10 points, followed by McCullar and Dick with nine points each. The next Badgers in the first half were Essegian and Klesmit, both with six points left before halftime.

Kansas ran away with the game in the second half when Essegian hit a clutch 3-pointer to reduce the Jayhawks’ lead to eight points, leaving 14:25. This game was immediately followed by a defensive play in which the freshman pulled a foul on Harris.

Essegian grabbed a steal and pulled a foul to give UW an offensive chance. He forced Kansas’ KJ Adams to lose control of the ball on the next defensive possession and forced Kansas into another turnover.

He hit back-to-back shots — a 3-pointer and a jumper — to draw Wisconsin within just a point with 8:55 in regulation. Essegian’s pass to Carter Gilmore in the suit gave UW their first lead of the second half, 52-50.

Essegian grabbed a big defensive rebound with 23.9 left in regulation and then hit two free throws to put UW 63-60 ahead in the final minute of regulation.

“I was just out there playing,” Essegian said. “It was exciting for these (3-pointers). At the same time, we just had to lean back. We needed something to get going and it just kind of happened. It was good energy to get us going.”

Chucky Hepburn may have scored earlier than in Wednesday’s win against Dayton, but his so-called “day off” has now stretched across three games.

He attempted to lift the ball up for one last shot at the win in overtime, but the buzzer went off when he fell short. It was similar to a shot Hepburn took to beat Purdue last season.

Hepburn added his first two points nine minutes into the game but would only add four more by the end of overtime. He shot 2-for-9 off the field while hitting his only 3-point attempt of the day. He also led the Badgers in three of their six turnovers – many of which were uncharacteristic for the sophomore.

Rolls off the tongue

Reach for the sky

This is the player you are looking for

Juuuuust a bit too long